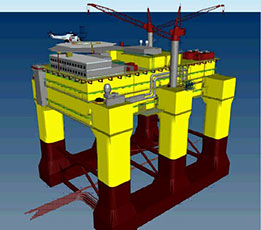 DNV has a close working relationship with the Norwegian offshore industry.
Ragnar Høeg

Aibel AS has used DNV’s Sesam software for as long as the company has existed. The current innovative DolWin Beta wind platform is designed using Sesam for fixed structures.

"DNV understands the customers and the challenges in the offshore market," says Ragnar Høeg, Section Manager Structural, Architect & Marine in Aibel. "We use Sesam on all main load-bearing structures." In addition, the software is used for processing units and FPSOs.

Currently Aibel has 30 users licences for Sesam for fixed structures. "We've used Sesam as long as we've existed as a company. Personally, I've used the Sesam software since 1990, and there are some people here who have used it since the 1980s," he says. Mr Høeg has worked at Aibel and its predecessor ABB Offshore Systems, for 16 years. The main use of Sesam at Aibel is on oil platform newbuilds, mostly for fixed structures and jackets. An example is the Gudrun project, where Aibel used Sesam during the building of a 10,000 ton topside finished in 2013.

The DolWin Beta project is also built using Sesam software. DolWin is a collaboration project between Aibel and ABB, a self installing GBS that will serve a large wind farm cluster in the German sector of the North Sea. It will receive alternating current from the wind farm, converting it into direct current before sending it onshore through subsea cables. Aibel is designing and building the platform, while ABB has project responsibility and is supplying cables and conversion equipment.

DolWin Beta will be towed into the right position and placed on the sea bed. It has separate living quarters for 24 people, a helipad and two lifting cranes. The platform is being built by a subcontractor in Dubai and will be fitted out at the Aibel yard in Haugesund, Norway, then towed out to the German DolWin field. Sesam's fem software  is used on DolWin Beta for structural and ballast analyses.

"The program covers the offshore segment well. DNV understands the challenges of the offshore industry. Many of the offshore companies have a close working relationship with DNV. And when we need support, DNV is focused on helping us with a solution," says Mr Høeg.

"There is a certain level of proficiency that our engineers have to reach in order to fully utilize the program, but when they have learned it they can make use of powerful and efficient software," he says. The efficiency is heightened when several users can work on a model. Using Sesam software for fixed structures, it's possible to perform analysis on separate parts of a structure, which saves time in comparison to modelling the entire structure.

The reporting functions have also advanced in recent years and it is possible now to transfer information directly from the analyses to a report.

Aibel does not use a third party modelling tool in dialogue with GeniE, but Høeg says this may change in the future. Currently they use a different program for non-linear analysis, and the information is transferred routinely from Sesam.