DNV’s Pathway to Net Zero Emissions report is a companion report to the Energy Transition Outlook. It describes a feasible pathway to limit global warming to 1.5°C by the end of the century.

Whilst our Outlook, which is DNV’s best estimate of how the energy transition is likely to unfold over the next 30 years, points to a 2.3°C warmer planet, the Pathway report offers a feasible way to close the gap to 1.5°C. The report showcases roadmaps for ten world regions and nine industry sectors. Indeed, whereas our Outlook predicts that we most likely will not reach net zero by 2050, our Pathway report draws on the findings from our Outlook report to answer the question: “How can the world achieve 1.5°C within the bounds of techno-economic and political feasibility?”

Fossil-free future not within reach

In the Pathways report, DNV concludes that 16% of fossil fuel will be left in the energy system in 2050 and that 20% of emissions cuts will have to be in the form of carbon capture and removal. This is because, in our view, it is infeasible to transition to a completely fossil-free energy system by 2050. 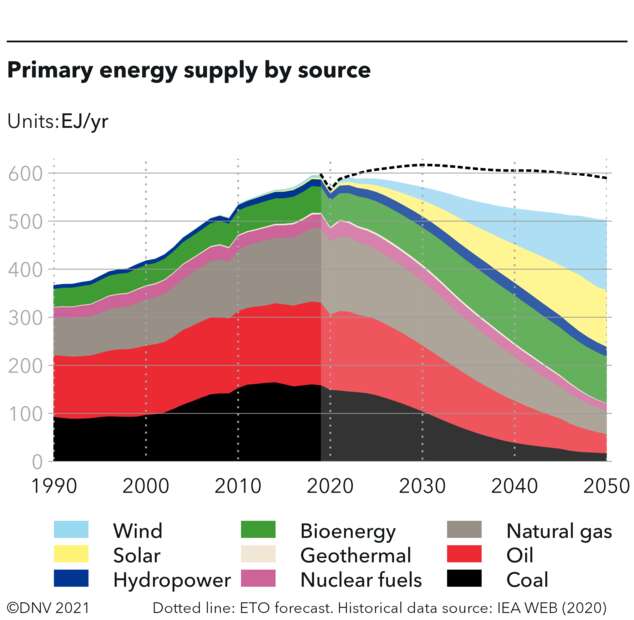 But why is this? The clear answer is that many developing nations and hard-to-abate sectors will not be able to achieve zero emissions by 2050, which is the critical threshold for the world to stay within 1.5°C of warming. Hydrogen is seen as the main decarbonization alternative for the hard-to-abate sectors, with biofuels in a supporting role, mainly in aviation. But hydrogen will only start to scale from the late 2030s, reaching competitiveness in the 2040s, and meeting only 5% of global energy demand by 2050.

The conclusion, therefore, is that zero is not enough. Indeed, those who can, including developed nations, leading companies and easy-to-electrify sectors, are going to have to go below zero before 2050. This is a key finding of our analysis of what it will take to achieve the ambitions of the Paris Agreement. The critical constraints – what the world lacks – are time and tough policy.

Those who can, must lead the way

Time-wise, it is critical to act now, at speed and scale to avoid the mounting costs of inaction. Policy-wise, tough mandates and bans lie ahead, as well as regulations that nudge desired behavioural changes like flying less, using lower levels of heat, and actively practicing circularity.  Transitioning below zero is a true challenge. It means reducing our own emissions to zero and going well beyond that before 2050. For some nations, like the US, it means that the announced ambitions to decarbonize the power system by 2035 and the economy by 2050 are not enough. The good news is that the technologies that could deeply decarbonize world energy are well known, and the transition is affordable long-term measured in relation to GDP. But if those who can don’t go below zero, and in doing so lower the cost and raise the performance of critical technology, we will never limit global warming to well below 2°C.