By 2050, the global power system will be 70% reliant on variable renewable energy sources (VRES). By the same year, Coal and gas will decline to 4% and 8% respectively of the power mix, and be largely confined to providing flexibility and backup in a power system.

From today to 2050, solar capacity increases 22-fold. Driving this are both plunging costs and a growing realization that VRES offer the cheapest and quickest route to both decarbonization and energy security.

Within a decade, about one fifth of all PV will be installed with dedicated storage, and by mid-century this rises to half. By mid-century, total installed capacity will be 5 TW for solar + storage.

We expect the average LCOE of solar PV to fall by at least 40% by 2050, with individual projects falling by as much as 60% relative to today’s average cost. With its high cost-learning rates (26% at module level per doubling of capacity, declining to 17% in 2050), solar PV will be the cheapest source of new electricity globally by a considerable margin, despite its lower capacity factors relative to other VRES sources. By 2050, 23 PWh/yr of solar electricity will be generated worldwide. 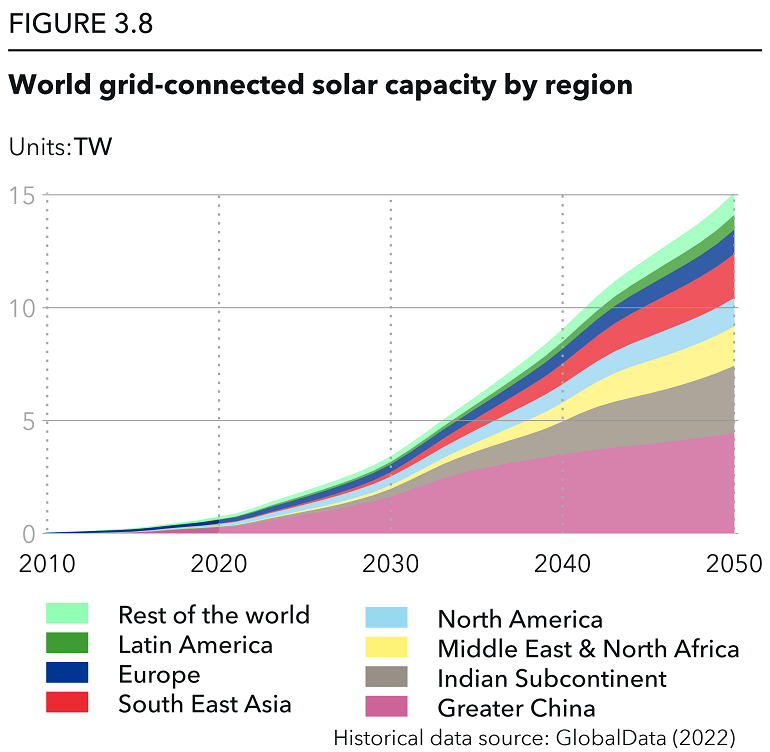 In Europe 50% of electricity will come from wind

From today to 2050, wind capacity will grow 9-fold, onshore wind 7-fold, and offshore wind 56-fold. LCOE for fixed and floating offshore wind reduces 39% and 84%, respectively, in our forecast period. Even relatively mature onshore wind sees cost reductions of 52%. These developments fuel the rise of on-grid wind from 1,600 TWh/yr in 2020 to 19,000 TWh/yr in 2050. By 2050, wind will provide almost 50% of on-grid electricity in Europe, and 40% in North America and Latin America.

Grid electricity from wind increases from 1.6 PWh/yr in 2020 to 19 PWh/yr in 2050, with Greater China, Europe and North America leading in output, and OECD and Latin America growing sharply from 2030. Europe and OECD Pacific will have the highest shares of offshore wind. 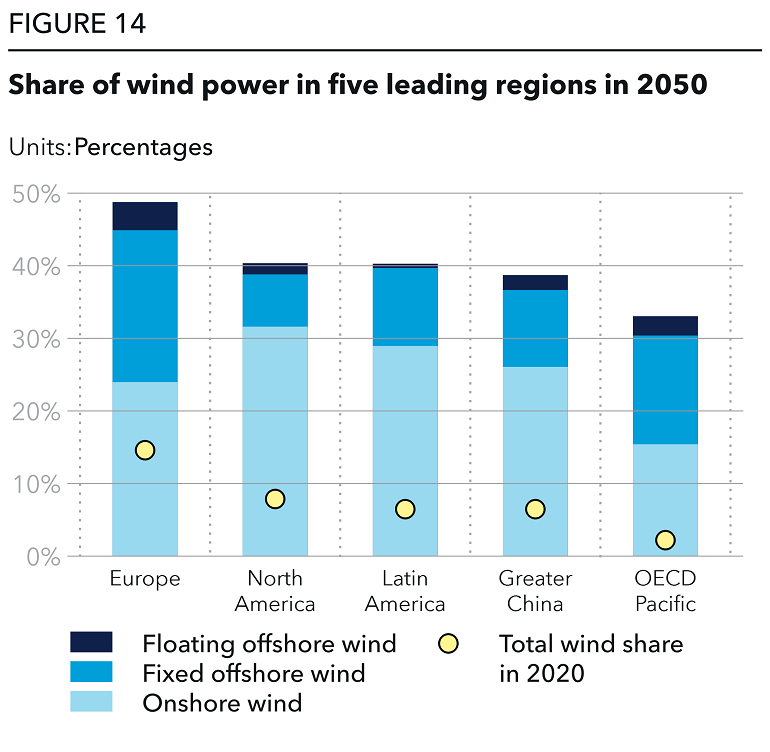 New turbine types and bigger turbines, blades, and towers will raise capacity factors for onshore wind from 26% now to 34%, and from 38% to 43% for offshore wind by 2050. This, together with cheaper turbines, are the main drivers of cost reductions of 52% for onshore wind over the period 2020 to 2050, with fixed and floating offshore costs dropping 39% and 84%, respectively. Of the 6 TW of installed capacity in 2050, 1.8 TW will be fixed and 289 GW floating offshore.

Grids: Total grid investments have averaged USD 450bn/yr in the past decade. The expansion of renewable power leads to a steady increase in grid investments, reaching levels of USD 500bn/yr in the 2030s, and growing up to USD 1.1trn/yr by 2050. Measured by circuit-kilometres, transmission and distribution lines will almost triple during our forecast period.

In a world seeing doubling of electricity generation by 2050, hydropower generation will still provide 13% of total electricity supply, down from 16% in 2020. While growing in absolute terms, this loss of share is transferred to solar and wind.

Waste management and high construction costs and long lead times remain stubborn realities for nuclear power. However, current energy security concerns are leading to renewed interest in this source, and our forecast this year reflects a modest uptick in nuclear, growing by 13% from today’s levels to 2050.