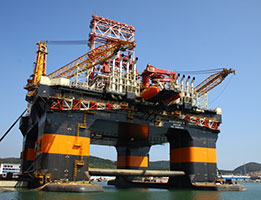 I think it is one of the best software solutions in the market. It's hard to find another software package that has solutions that are as complete and wide in scope.
Li Lei

CIMC Raffles use a wide array of Sesam software

CIMC Raffles in Yantai, China is one of the world's largest specialist offshore and marine construction yards. For strength analysis, including hydrodynamic, structure and fatigue, they use a wide array of Sesam software.

"I think it is one of the best software solutions in the market," says Li Lei, R&D Department Manager at CIMC Raffles. Speaking of the Sesam and the software market in analysis of floaters, semisubmersibles and ships, he says, "It's hard to find another software package that has solutions that are as complete and wide in scope."

Basic design of structures and more

Mr Li has been working at CIMC Raffles since 2007. He started using Sesam back in 2004 when he was a student, as the software was recommended by his lab supervisor. Today, as department leader at CIMC Raffles, he guides the 60-person technical team during basic design of structures such as drilling rigs and jack-ups. He has given naval architecture and structural technical support to six delivered semisubmersible platforms and four delivered jack-ups. At any given time, 30 members of his team are using Sesam.

Mr Li is especially happy with Sesam's user-friendly interface, making it easy to handle and quick to learn. It takes less time to work on the basic design and to make reports, thereby increasing efficiency significantly. "The modules of Sesam connect tightly with each other," he says. "It is convenient and time-saving to pass the database between each module. We did not need to develop in-house software to achieve this," he says. "The analysis reports are post-processed and the results in the reports are completed."

The project owner requires the team to provide the basic design work in a very limited working period, so high-efficiency software is needed. During the first half of 2012, the North Sea project semi-submersible platform CA380N was certified as DNV classification.

"With the increasing number of DNV projects, we decided to purchase more sub-licences of Sesam, including modules for fixed structures, floating structures and moorings and risers," says Mr. Li. "I have confidence in DNV, and I'm looking forward to new developments in the software."

Sesam for moorings and risers

Software for analysis of moorings and subsea umbilicals