“Even curmudgeons can learn (sometimes)”: things we’ve learned and enhancements we’ve made, thanks to our users 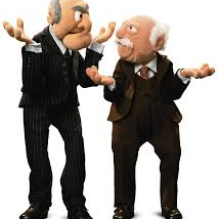 This post comes to you from Alex Hollis, Senior Principal Product Engineer for DNV’s Simulation & Optimization products, which includes Synergi Gas. Not only that, Alex is a clever and skilled storyteller, as you will learn for yourself. Enjoy!

Some time ago, a young engineer from one of our natural gas distribution system client companies was attending a Synergi Gas training course. He approached me to ask how he could best identify ‘critical pipes’ in the high pressure parts of his distribution models. I was stumped right there, wondering if he meant something like ‘critical flow’, where the gas flowing velocity was approaching sonic conditions (which is not something desirable in an operating pipeline system), or maybe pipes that were, you know, like really, really important. So I asked for clarification.

It seems that his supervisor was adamant that any pipe operating over 100 psig (690 kPa-g), and having a pressure ratio of 2 or greater was a ‘critical pipe’. And he further insisted that any such pipe be split into as many pipes as it took to ensure that none of them had a ratio of over 2.

I’ll pause while you ruminate on that last paragraph a little while, because it confused me, too. 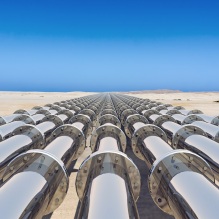 You’re back? OK, let’s press on. I immediately thought of pressure regulators, or pressure governors, that differentiated sonic from sub-sonic flow based on the pressure ratio across them, and that ratio is roughly 2, but that was just coincidental. I pressed on, asking why the supervisor used that rule of thumb. And then the client said,

“Because you get better answers.”

Whoa. So, they’re not talking about ‘critical velocity’, but somehow ratio was the key. And the expression ‘better answers’ can mean a lot of things, most of them pretty subjective.

“Let me get this straight,” I asked, “if you have a really long pipeline without hills, compressors, valves, intermediate points, valves, etc., you’d still put in nodes to keep ratios above 2?”

And the results were different.

And when I modified flows so the velocities were higher, and the pressure drops greater, I found that what the client was saying was true.

Which reminded me of a famous comedy group from many years ago, who had an album entitled “Everything you know is wrong.”

I sat back awhile to ruminate on this.

What the client’s manager was doing was using a rule of thumb to deal with a reality of network analysis. Let’s take a minute to look at the general flow equation for gas, or what we call the Fundamental Equation in Synergi Gas: 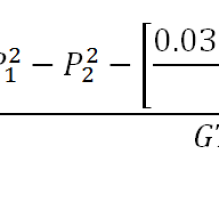 For the friction term, f, we’ll use the basic Colebrook-White equation: 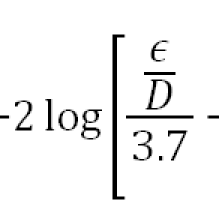 And the Reynold’s number, Re, is expressed by: 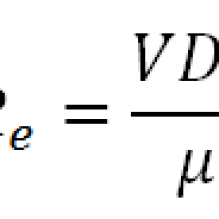 Without going into all the various abbreviations and multipliers and factors in those equations (they’re defined in your Synergi User’s Guide), note the terms V, Pavg, T, and Z.

Synergi Gas uses average values for V (velocity), T (temperature), and Z (compressibility), computed at the average pressure in each pipe. And that led to the key epiphany – AVERAGES! If you are modeling a pipe, usually a long one, with high velocities, high temperature changes, high pressure losses, the average may be misleading as there are significant changes in those V, P, T and Z values. That’s what our client’s manager was talking about, and that’s what they were trying to avoid.

One really long pipe can have a pretty crude average. The shorter the pipes, the more granular your average becomes, and therefore the overall solution is better. And objectively better, too.

Now, in reality there probably aren’t a whole lot of distribution systems for which this could be a problem. But then again, knowing this might come in handy someday.

As it happens, the client – and especially his manager – were making a lot of sense. Lesson learned.

Check out Part 2 of this story, where a more detailed example demonstrates this clearly, and to see how Synergi Gas was modified to address this – for this client and for all users!