Achieving a carbon-neutral EU by mid-century will cost trillions of euros less if use of gas, increasingly decarbonized by carbon capture and storage (CCS), is continued alongside growing use of electricity in the transition.

This is a key finding in European Carbon Neutrality: The Importance of Gas, a Eurogas study commissioned from DNV GL. Eurogas represents the European gas wholesale, retail, and distribution sectors towards EU institutions.

The study predicts the outcomes of contrasting policy choices in Europe’s energy mix between now and mid-century to reach carbon neutrality. It is based on DNV GL’s Energy Transition Outlook (ETO), a model of global energy demand and supply to 2050.

Eurogas commissioned DNV GL to use the company’s 2019 ETO model – which did not foresee EU carbon-neutrality in 2050 – to forecast trends under two scenarios that do make this assumption. In one of these scenarios, electrification is the strong driver towards a net-zero EU, and demand for oil and gas declines but remains in the picture. In the second scenario, gas plays a strong role, with demand for oil and gas in 2050 being twice as high as in the ‘strong electrification’ scenario. The findings are compared with two other transition pathways – Eurogas 2019 and 1.5TECH (Figure 1). 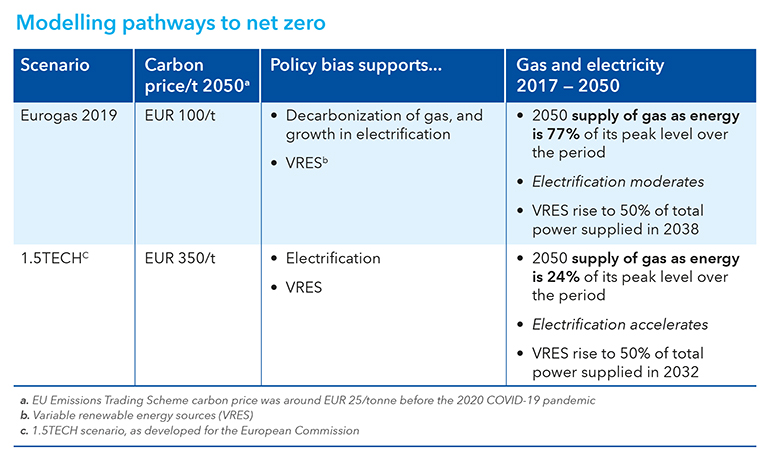 Figure 1: Key assumptions in the Eurogas 2019 and 1.5TECH models. The models forecast energy demand under different pathways to achieving full decarbonization of the EU energy system in 2050, with net negative emissions in power and manufacturing to offset unabated emissions.

Applying the ETO model in this way indicates that policies strongly favouring either gas decarbonization or strong electrification can lead to a net-zero EU. However, supporting a broad fuel mix is seen to offer a significantly more affordable transition for householders and taxpayers. 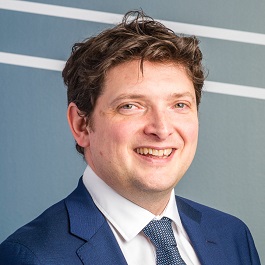 The study indicates that the EU can save EUR 4.1 trillion by 2050 by using a mix of energy carriers including renewable and decarbonized gases to achieve carbon neutrality
James Watson,

“The study indicates that the EU can save EUR 4.1 trillion (trn) by 2050 by using a mix of energy carriers including renewable and decarbonized gases to achieve carbon neutrality,” said James Watson, Secretary General of Eurogas. “Applying this approach to heating buildings emerges as particularly important for making this saving, which is very relevant as Europe needs funds to recover from COVID-19.” 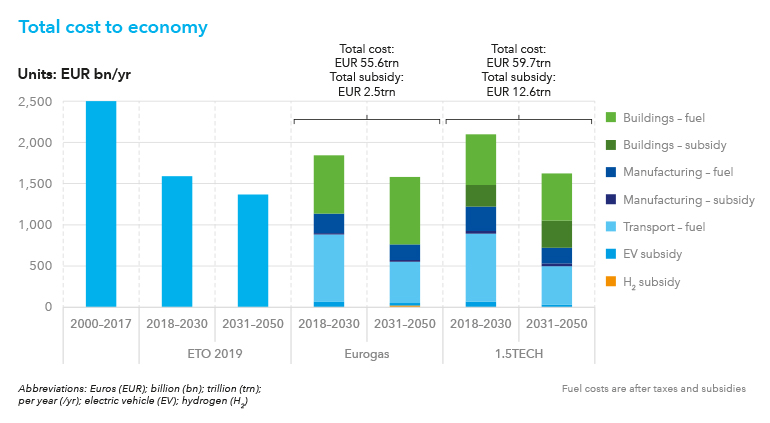 The Eurogas scenario delivers estimated savings of around EUR 10trn through gaseous distribution in buildings, offsetting higher costs elsewhere, when compared with switching from gas to electric. “An electric heat pump costs more than a gas boiler, but the real cost is renovating and retrofitting homes, removing radiators and piping to install upgraded or new systems compatible with your heat pump,” Watson explained.

There are additional costs if homes need better insulation, he added: “But, if you combine energy efficiency with switching from natural gas to renewable hydrogen or biomethane feedstock, you strongly reduce greenhouse gas emissions while keeping it much more affordable for the householder and the European taxpayer.”

More than 80% of the investment needed for gaseous energy networks in the Eurogas scenario is to adapt them for using hydrogen. In this view, blue hydrogen made by steam methane reforming with CCS supplies most medium-term demand for hydrogen, reaching 820 terrawatt-hours per year (TWh/yr) in 2050.

In both net-zero scenarios modelled, CCS is indispensable for decarbonizing power generation and manufacturing, with installed capture capacity reaching 895 and 1048 million tons of CO2/yr in 2050 for the 1.5TECH and Eurogas scenarios respectively.

Europe must start the hydrogen economy now – there is no time for delay […] CCS is not an option but a necessity if we are to reach our climate ambitions
James Watson,

Watson commented: “The Eurogas study shows that to achieve carbon neutrality by 2050, Europe must start the hydrogen economy now – there is no time for delay. This includes all clean hydrogen options – reforming natural gas through CCS, producing hydrogen from renewables, and blending it with methane. Furthermore, CCS is not an option but a necessity if we are to reach our climate ambitions.”

The modelling also suggests that second-generation biomethane can sustainably deliver 1014 TWh/yr of energy in 2050, but with supply costs impacted by feedstock scarcity in the longer run.

The Eurogas scenario also means spending less on power grid expansion to accommodate all-electric heating. The estimated capital expenditure (capex) for such expansion up to 2050 is seen to be around EUR 1.3trn less than in the 1.5TECH scenario. The model shows that, when coupled with demand response technologies in the power sector, continued use of existing gas supply infrastructure reduces the peak-to-average capacity need by 19% between 2017 and 2050. The investment required for continued use of gaseous energy is a fraction – 11% of total capex in the Eurogas scenario – of that needed for the 1.5TECH scenario’s build-up of power grids.

The outlook for gas in Europe’s fuel mix brightens

Overall, the modelling suggests that the Eurogas pathway could save society around EUR 4.1trn between 2018–2050 along the path to net-zero carbon. This approximates to 0.5% of the model’s assumption for cumulative European GDP, and is equivalent to EUR 600 per household per year over the period 2018–2050 (Figure 3). 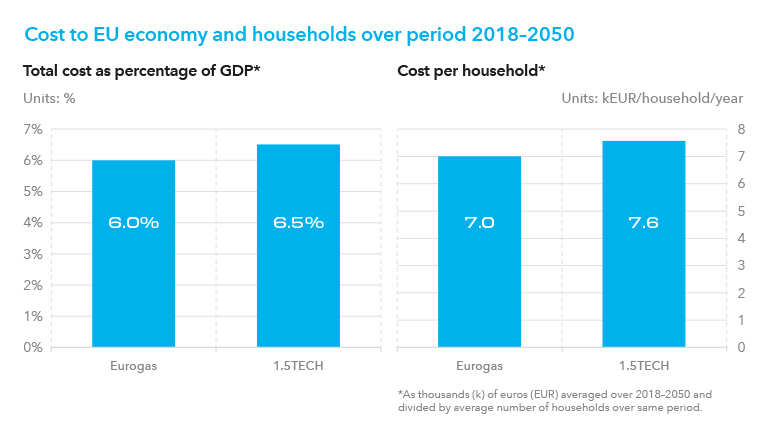 Figure 3: DNV GL modelled total cost of Eurogas and 1.5TECH paths to EU carbon neutrality as a percentage of GDP and per household.

The DNV GL study has been important in furthering understanding of the future potential for gas in Europe’s energy transition, said Watson: “We achieved a good basis for the modelling, which I am happy to endorse.”

Eurogas is presenting the study to policymakers in the European Commission, the European Parliament, EU Member States, and other stakeholders and associations. “We hope it will accelerate belief that hydrogen is a good pathway for Europe. The study can demonstrate that, while we can certainly achieve carbon neutrality, we will need to use gaseous solutions to do so,” Watson stressed. “We want to inform as wide a relevant audience as possible of the different options available to them.”

Watson believes the tide has turned for gas: ”The outlook is much brighter than in 2018 when the European Commission had essentially embarked on an ‘electrify everything’ agenda. I believe the Commission now understands the limitations of electricity and that there is little likelihood of achieving 80% electrification by 2050.

All “serious players” are now talking about “the new fuel mix”, which is more positive for gas, he concluded: “As for the longer term, the European hydrogen strategy recognizes hydrogen as a great way to store and transport renewable energy, and we agree. We are seeing increasing acceptance of the argument that using CCS to produce low-carbon hydrogen will play a very important part in our chances of reaching the 2050 carbon-neutrality target.”

Download the report - European Carbon Neutrality: The Importance of Gas

A study for Eurogas