One example is Out-of-plane bending (OPB) of mooring chains. OPB of chain links in the upper sections of mooring systems adds significant fatigue stresses to the links, creating risk that these may fail with potentially dangerous and costly consequences. Awareness of the risk has been rising with growing knowledge of the failure mechanism. OPB-related mooring line failures have occured in the oil and gas industry. These are cases where the premature rupture of mooring lines was attributed to bending fatigue of the first free chain links.

OPB can therefore be an important and even critical risk in mooring systems (especially those with large pretension), and hence in mooring system design for today’s challenging oil field and offshore floating wind developments and operations. This is an area of potential for cross learning from the oil and gas industry to the emerging floating wind industry. The developments described herein, that help to better-understand OPB of large-diameter chain, are useful for the design of floating wind mooring systems which, at present, conventionally use a 3-line mooring system and hence the required minimum breaking load (MBL) per line is large leading to large-diameter chain.

To mitigate OPB, heavy and complex solutions are installed. Examples include multilevel articulated chain stoppers, a practice relevant to both the oil and gas and floating wind industries. Understanding OPB better can help to remove unnecessary conservatism, and to decrease the weight and cost of such equipment. This again has an impact on the payload that the floater can carry.

Several studies performed to understand OPB led to a joint industry project (JIP), run from 2007–2013, in which many of the industry relevant stakeholders collaborated. Based on testing chains up to 146 millimetres (mm) in diameter, the JIP led to the development of the current fatigue design guidelines for mooring chains.

Today, we are seeing the use of larger mooring chains than those considered during the guidelines’ development. This trend is due to recent mooring chain manufacturing developments, and to interest in the operation of large vessels – mainly floating production storage and offloading vessels (FPSOs) – and in deployment in demanding sea state conditions.

However, OPB fatigue mitigation measures are complex, heavy, and expensive to design, manufacture, and maintain. Therefore, optimized design greatly benefits from dedicated OPB testing of chain samples identical or similar in size to the actual chains used on each project. 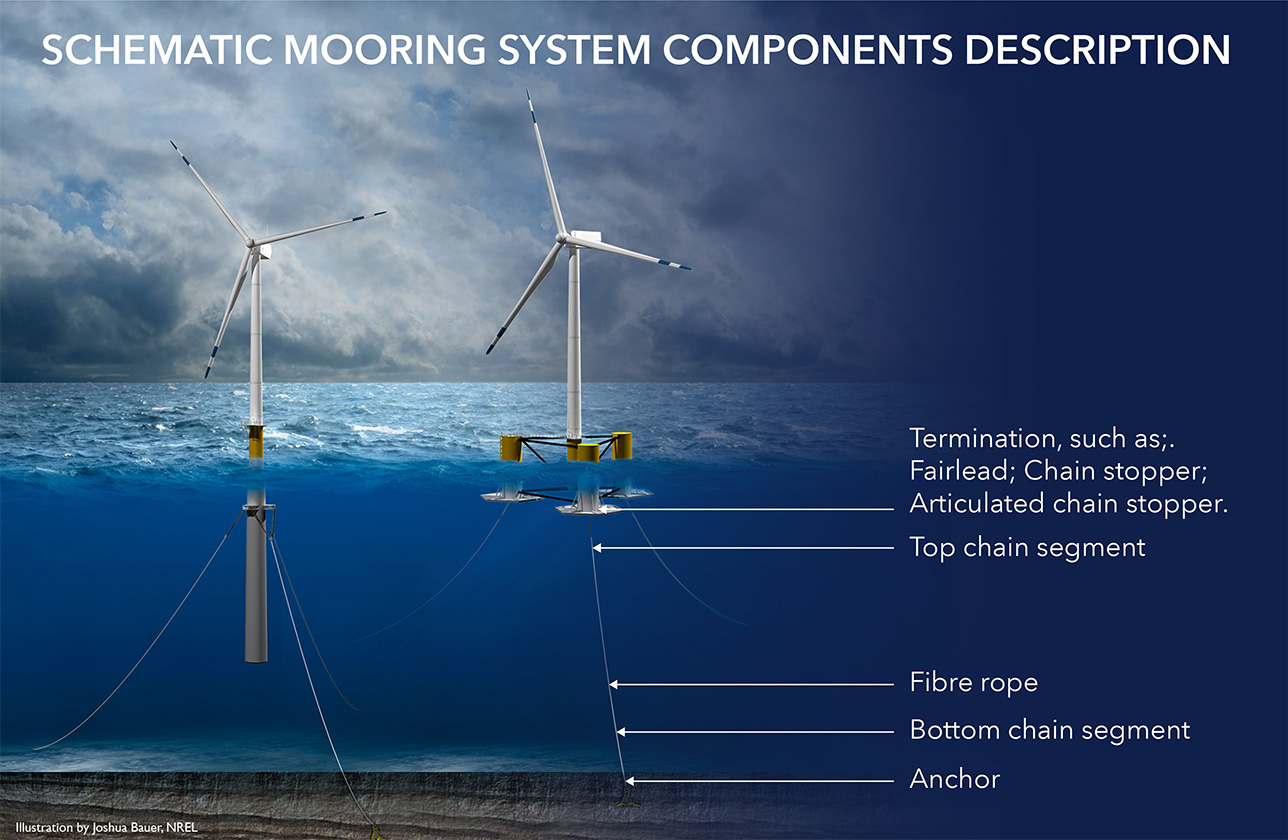 Responding to interest among operators and design companies in verifying and optimizing the design of mooring systems with large-diameter chains, DNV has developed a test rig to conduct OPB stiffness identification.

This rig can also reproduce wear damage that can happen if chain links slip against each other in air and water conditions. It can perform OPB testing of mooring chains up to 190 mm in diameter without any modifications, and at a tensile load up to 375 tonnes. The interlink rotations can be in the range ±3 degrees, which is well above the limit beyond which the links would start to slide against each other.

As discussed in a recent paper, two successful testing programmes have already demonstrated the accuracy of the test rig and the gains obtained in mooring systems design optimization.1

Our global network of laboratories and test facilities