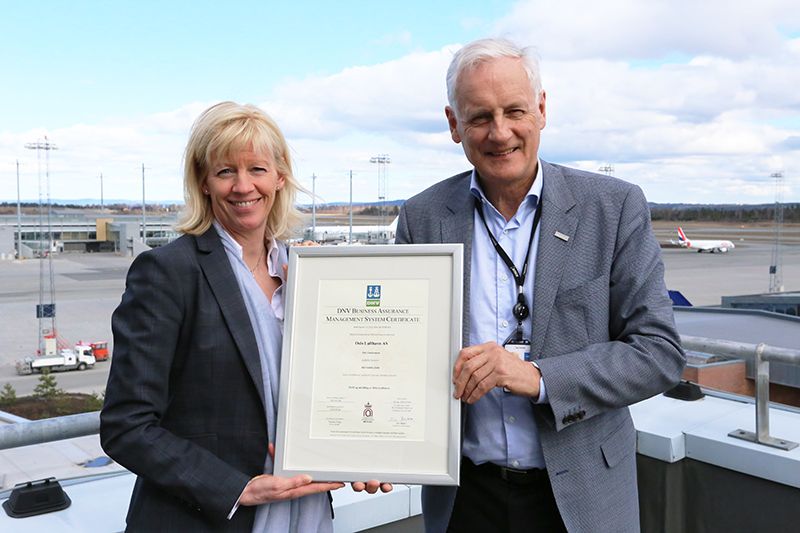 “We are proud to be the first airport in the Avinor group to be certified to ISO 14001. Oslo Airport has since the outset in 1998 had a strong environmental profile, and this certification is a great acknowledgement of our work,” says Nic Nilsen, managing director of Oslo Airport.

The certification process started after a status analysis by DNV GL in December 2010, the main revision was conducted in the fall of 2013, and the certificate awarded on March 24, 2014. The certificate proves that Oslo Airport’s environmental management system has been measured against a best practice standard and found compliant.

From snow storage to hydrogen fuel
Oslo Airport works systematically to minimize its environmental impact and to use new technology and innovation to improve. Among steps taken is to store snow during wintertime and use it for cooling during the summer, reuse energy from spill water and a research project on fuelling the airport’s vehicles with hydrogen. The airport has also reached the highest level of certification in the Airport Carbon Accreditation scheme every year since 2010, a voluntary scheme to systematically reduce emissions from airports.

“Oslo Airport is a well-organized and professional company with many employees involved at different levels to obtain this certification. Our auditors experienced openness and pride from the airport’s employees in all their efforts to minimize the environmental impact. The airport is running a large operation, has a lot of equipment and a multitude of partners. We are impressed to see how Oslo Airport systematically and professionally works with its environmental impact,” says Karin Stensmyren Monsen, Country manager of DNV GL – Business Assurance Norway.

About Oslo Airport
Oslo Airport (OSL) is Norway’s main airport and serviced 23 million passengers in 2013. It is situated at Gardermoen approximately 47 km north of the capitol Oslo.

About 15,000 people divided between over 100 companies are involved in everything from baggage handling to air traffic control work to keep the airport running 24 hours a day. In 2007 and 2010 Oslo Airport was named Europe’s most efficient airport.