DNV GL has named Marcus Bole as the winner of the DNV GL COMPIT Award for 2014. The British computer aided design expert, from AVEVA Solutions in the UK, was honoured for his paper’s contribution to the promotion of innovative approaches in ship design, at the COMPIT Conference which took place from 12 to 14 May in Redworth, UK. 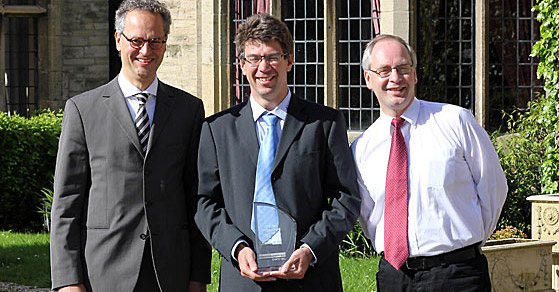 From left: Stefan Harries, Marcus Bole with the DNV GL COMPIT Award for 2014 and Volker Bertram

The environmental and economic requirements for ships have changed radically over the last few years and designing vessels for maximum energy efficiency and reduced emissions is now standard practice. The existing fleet in service faces the challenge of remaining competitive, while meeting new regulatory requirements. Even for relatively new vessels, retrofitting solutions can have a significant impact on their ability to compete with newer tonnage.

However, the first step for undertaking intelligent refits is a suitable geometric model of the existing ship and for many vessels this can be problematic. Inconsistencies within the existing models and the difficulties of moving models between different design platforms, can result in a lot of lost man and processing hours. Marcus Bole’s paper, “Regenerating Hull Design Definition from Poor Surface Definitions and other Geometric Representations”, presents a new solution to this problem by combining modern 3d scan technology and intelligent CAD geometry processing.

“Marcus’s paper is really a timely answer to a widely faced challenge within the maritime industry currently. It enables retrofits, not only for efficiency but for the installation of ballast water processing, or emission treatment systems, for many vessels making them fit for the future. It is a smart solution and reflects DNV GL’s values, as we look for “smarter” and “greener” maritime solutions.”

COMPIT is the abbreviation for “Computer Applications and Information Technology in the Maritime Industries“. The conference, which took place for the thirteenth time, offered information on advanced IT applications for the lifecycle of ships and offshore structures. Topics such as “Autonomous Ships”, “Performance Insight”, “Virtual Reality,” and “Marine Robotics”, amongst others, were discussed by the participants. As in previous years, DNV GL was a main sponsor of this event.

This is the seventh time that an outstanding scientist has been presented with the DNV GL COMPIT Award at this prestigious conference. Previous winners of the award are: