BOSTON, MA, US, 12 April 2022 - The Hot Wheelz race team from the Rochester Institute of Technology (RIT) in New York, approached DNV to help with testing the batteries for their solar electric race car and experts at the Battery and Energy Storage Technology Test & Commercialization Center (BEST Test Center), managed by DNV, were more than happy to help. The Hot Wheelz team is a nearly all female group of RIT students who are developing and building a solar-electric powered race car to compete in the 2023 collegiate Formula Sun Grand Prix (FSGP) track event and the American Solar Challenge (ASC) road event against other U.S. college teams. The students are primarily focused on STEM, but includes people from all backgrounds. 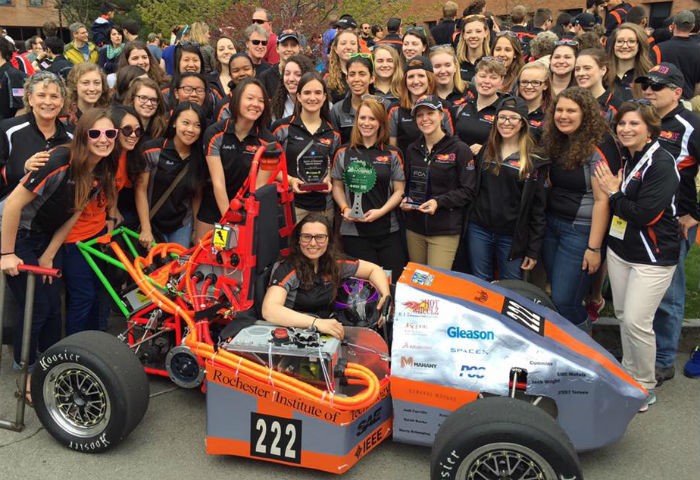 The students engaged with DNV to test two alternative battery cell types as well as the battery module to understand their usability and behaviour in their race car. In the first step the students worked with DNV to develop a test plan, as the races require two very different application profiles. Firstly, for the qualifying event, speed and acceleration is important, requiring high discharge rates from the battery and secondly for the road race where endurance is paramount to go as far as possible without recharging.

The team chose 18,650 battery types from two manufacturers (labelled S and P for anonymity). In the first test the team set up and ran two cells of each type at two temperatures (23°C and 45°C) through 100% charge and discharge cycles for about 4 weeks. The results showed that while the P-cells had initially a larger capacity degradation than the S-cells, they levelled out and showed less degradation over time. They also performed well at the higher test temperature, making them the preferred choice for the race car, as the races will run in hot summer months.

“The next step is to test the entire battery module with Battery Management System (BMS), which is planned for spring 2022. For this test, the Hot Wheelz team wants to understand the thermal conditions inside the module during different load demands, (e.g., during acceleration and steady-state operation) so they can decide how much cooling they will need and how long the battery will last under various conditions.” explained Martin Plass, business development manager of the BEST Test Center.

The plan is to set up the module with a number of thermal sensors in different parts of the module inside a climate chamber and cycle the battery at different temperatures and with different charge and discharge rates to understand the heat build-up and performance characteristics of the module and the ability of the BMS to control the cells.

Rich Barnes, Executive Vice President and Regional Director, North America, Energy Systems at DNV said, "DNV’s BEST Test Center helps to develop, test, and validate innovative battery energy storage technologies. It’s great that we were able to advise the Hot Wheelz team and we look forward to the next round of testing. We are pleased to be able to help these students with their exciting project and encourage safe and sustainable solutions."

DNV is an independent assurance and risk management provider, operating in more than 100 countries. Through its broad experience and deep expertise DNV advances safety and sustainable performance, sets industry standards, and inspires and invents solutions.

Whether assessing a new ship design, qualifying technology for a floating wind farm, analysing sensor data from a gas pipeline or certifying a food company's supply chain, DNV enables its customers and their stakeholders to manage technological and regulatory complexity with confidence.

Driven by its purpose, to safeguard life, property, and the environment, DNV helps its customers seize opportunities and tackle the risks arising from global transformations. DNV is a trusted voice for many of the world’s most successful and forward-thinking companies.

In the energy industry
DNV provides assurance to the entire energy value chain through its advisory, monitoring, verification, and certification services. As the world's leading resource of independent energy experts and technical advisors, the assurance provider helps industries and governments to navigate the many complex, interrelated transitions taking place globally and regionally, in the energy industry. DNV is committed to realizing the goals of the Paris Agreement, and supports customers to transition faster to a deeply decarbonized energy system.

You can learn more about RIT's Hot Wheelz team at www.rithotwheelz.com.