DNV GL, the world’s largest resource of independent energy experts (uniting DNV, KEMA, Garrad Hassan, GL Certification), today demonstrated its commitment to modernising and developing power in Africa by advising on the construction of a 400kV high voltage overhead transmission line and substations in Kenya. Designed to strengthen the Kenyan grid and build a connection between the capital, Nairobi, and one of the largest wind farms in Africa, Lake Turkana Wind Power, the 426km 420 kV AC transmission line runs from the national grid at Suswa (80km NW of Nairobi) to Loiyangalani (SE of Lake Turkana).

Africa’s economy is booming; seven out of the 10 fastest growing economies in the world are in sub-Saharan Africa. However this explosive economic growth has created a severe electricity shortage in countries across Eastern and Western Africa, such as Kenya, which is hindering further commercial developments. In fact, according to The World Bank statistics, African manufacturing enterprises experience power outages on average 56 days per year. With reliable access to electricity 365 days a year, businesses in the sub-Saharan region could avoid losses of up to 20% in sales revenue, which is a relatively significant amount for any business.

Therefore, there is an urgent need to develop the energy infrastructure across Africa in order to provide the continent with wider reaching and more reliable power and support future economic growth and prosperity for the African society.

The 400kV Kenyan transmission line is supporting the government initiative to harness the country’s rich renewable resources to boost the economy and respond to consumption needs in the capital. Without transmission lines such as this one, the future development of reliable wind and geothermal sources will be limited and Kenya will be forced to rely on more expensive fossil fuels serving power plants in the coastal region.

DNV GL was selected to advice on the transmission line by Kenya Electricity Transmission Company Limited (KETRACO), a government owned organisation established to develop new high voltage electricity transmission infrastructure, in line with the country’s development programme Kenya Vision 2030. DNV GL provides in-depth technical expertise and critical insights to KETRACO, in addition to developing the specification for the project, supervising construction work and providing training on asset management. DNV GL will continue to support the project throughout the operational phase up to financial close. 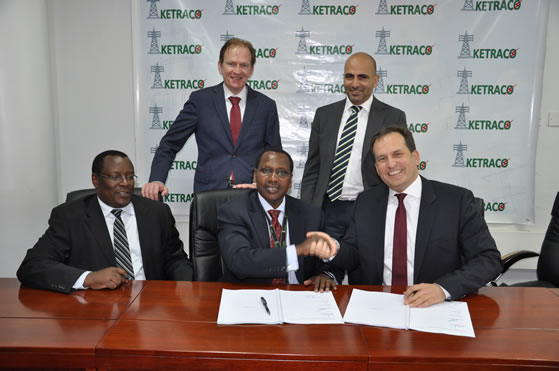 The project also involves advice for the construction of a power transmission substation at the Loiyangalani project site and a terminal substation at Suswa. Suswa substation will also be connected to the Olkaria geothermal generation power stations, Nairobi North substation, Ngong substation and Isinya substation. The development is currently in its early stages.

Dr. John Mativo, Chief Manager Planning and Development at KETRACO said: “Improving the quality and reliability of electricity supply throughout Kenya is crucial to the continued growth of our economy. The 400kV transmission line project plays a critical role in this and will help to develop a new and robust national grid system. “DNV GL’s in-depth technical expertise and leading global advisory services have proven invaluable to the success of this project, which is paving the way for Kenya to produce clean, reliable power and transmit electricity to areas that are currently not supplied.”

David Walker, CEO of DNV GL - Energy commented: “The 400kV transmission line will be an important part of the country’s electricity generation infrastructure, allowing the 300MW Lake Turkana Wind Power plant and planned future geothermal plants to deliver low cost, renewable power to the nation. This line demonstrates Africa’s commitment to continued development and modernisation. DNV GL was chosen based on our deep technical expertise, expansive services capabilities and our demonstrated reputation for delivering objective and independent technical and business insights. The project also marks another significant expansion of DNV GL’s commitment to, and involvement with, Africa. We are pleased to strengthen our relationships in the continent and support Kenyan economic growth through the provision of power infrastructure.”