How lowest costs will power the growth of big solar - everywhere

The world is electrifying. The share of electricity in the total energy mix will more than double to 45% by 2050. Renewable energy, led by solar photovoltaic (PV), will supply that growth and replace much of today’s fossil-fuel generated electricity. The reason? Cost.

DNV’s global solar segment leader. He has many years of solar technology research, development, and management experience while working at the US Dept. of Energy (DOE), the National Renewable Energy Laboratory (NREL), and earned his PhD at the Colorado School of Mines. He conducted solar research at Sandia National Laboratories as a postdoc and an Intelligence Community Fellow.

The powerful economies of scale in PV are likely to see costs in 2050 at half of today’s levels – enabling additional investments in grid expansion and integration technologies such as storage, connectivity, and demand-response that increase the value of solar assets.

Owing to the low costs of solar PV, we predict that global PV capacity will increase by a factor of 65 from 2016, to 19 000 GW in 2050, representing almost half of all installed electricity capacity globally at that time.

Although other commentators emphasize the role of distributed generation over large centralized installations, we do not share that view. We foresee utility-scale PV dominating electricity generation because of its favourable economies of scale, outweighing the savings in transmission costs brought by decentralized microgrid installations.

In this article we distinguish between five classes of PV installations – from utility scale to off grid micro-installations.

Across all of these classes we expect to see sharp cost reductions – indeed, by 2050 these will amount to savings (relative to today’s costs) of between 43% and 54% in all world regions.

Deputy director, DNV Energy Transition Programme, responsible for simulation models related to decarbonization. He has spent most of his career in academic environments, including MIT, as scientist, professor, and research director on energy, security and digitalization issues. He has also held senior positions in various management consulting assignments.

Due to their expected continued cost-learning rates of 18% per capacity doubling, PV panels will become an ever-smaller share of installation costs. This places utility-scale installations, where PV panels are a high proportion of costs, at an advantage vis-à-vis microgrids – within the next decade, utility scale will move to being generally three times more cost efficient than smaller microgrids (albeit with significant regional differences related to, for example, costs of labour). In the longer run, utility scale, will see its cost advantage decline, but will still be more cost effective vis-à-vis microgrids by a factor of two by 2050. This pattern of utility-scale dominance will characterize all world regions, with the exception of Sub-Saharan Africa, where inexpensive off-grid PV solutions will prevail over the next two decades.

Solar photovoltaic (PV) system investment costs have declined sharply over a long period – so much so that forecasters and modelers have struggled to keep pace with developments over the last two decades. At DNV, we estimate system cost will continue to decline by another 50% resulting in installed capacity costs for utility scale PV of between $0.42 and $0.58/W (depending on region) by 2050, with increasing value in these assets coming from corresponding expenditures in storage and grid integration technologies.

This remarkably low capacity cost will enable solar PV to grow 65-fold from 1% of total electricity generation in 2016 to 40% in 2050, becoming the single largest provider of electricity in less than two decades. The trajectory we envisage for utility-scale PV generation, in particular, is exponential for almost another two decades – in contrast to the annual capacity additions anticipated by the IEA’s New Policies Scenario, which are held almost constant at present levels.1 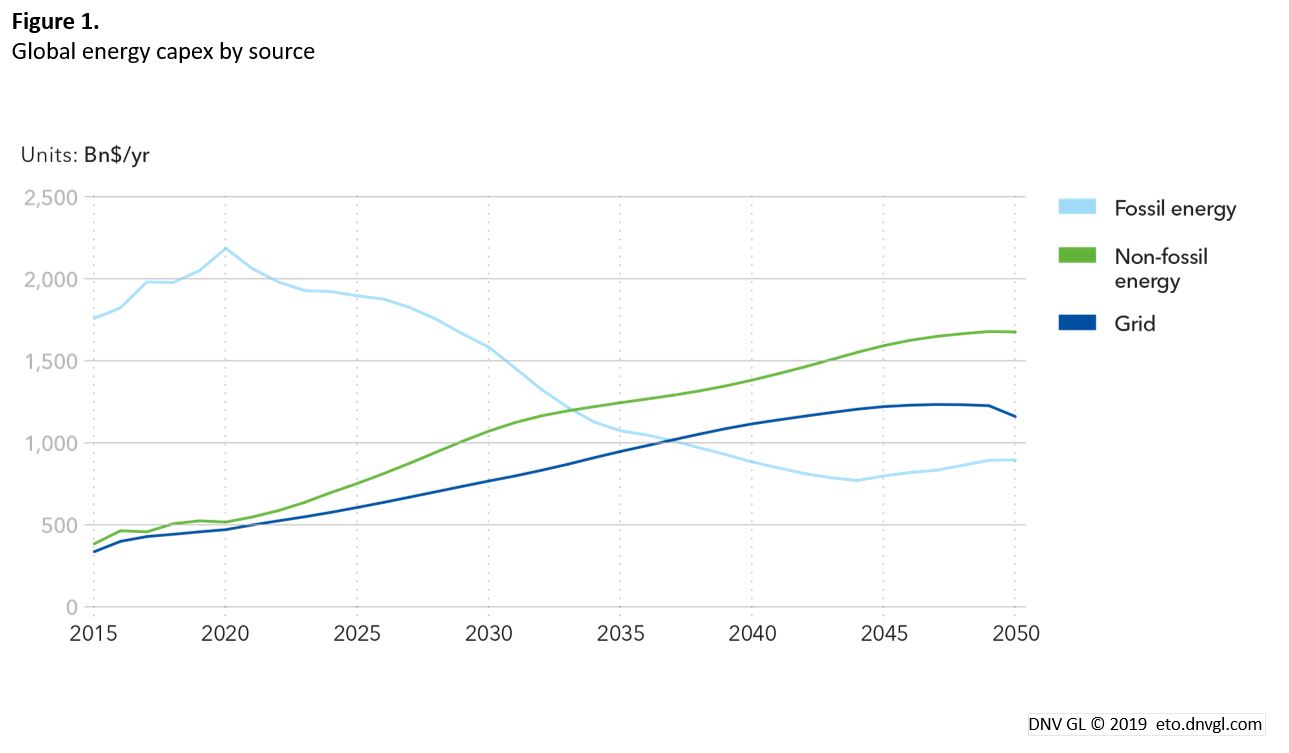 This change in the magnitude of solar deployment sets up a potential bonanza for financial institutions competing effectively for clean-tech business. By 2050, capex for renewables and grids will be some 47% of global expenditures, up from 17% in 2016. Grid and non-fossil capex taken together will likely exceed fossil capex before 2030 (see Figure 1). And the interesting takeaway for the project finance community is, as we detail below, that the projects will be heavily skewed to large-scale solar installations, despite the attention currently enjoyed by small, distributed PV generation.

Investors, developers, operators, and regulators will need to understand the future prospects of various PV classes, in particular growth rates and integration strategies for decentralized systems as well as for centralized utility-scale systems that may require investment in transmission and distribution. DNV has defined five PV classes, from centralized to off-grid. These differ on typical installation capacity, learning rates, investment and operations costs, and allotted bespoke storage.

All classes will require system flexibility measures, such as energy storage and demand-response, whereby demand is shifted to match electricity supply. However, there is little or no dependence on transmission grids for microgrid and off-grid systems. This sets up a key question: will the superior economies of scale enjoyed by the large-scale classes outstrip the savings afforded by the smaller-scale micro- and off-grid PV?

To answer that question, we have investigated the impact of cost differences in ten global regions.

Three of these are well-developed industrial regions – North America, Europe and OECD Pacific (Japan, South Korea, Australia and New Zealand) – while the other seven are a mixture of less developed regions with less-mature grid infrastructure.

We use the DNV Energy Transition Outlook forecast for overall PV growth and capacity in each of these regions as a base case of the total PV in each region, and split those forecasts into the five PV classes, based on hard cost data and market expertise.

On a global level, utility-scale installations will account for about two thirds of global capacity in 2050. Other grid-connected categories will make up roughly a further 30% - i.e. commercial & industrial (±15%) plus grid-connected residential (±10%). Microgrid installations will have approximately a 15% share, while off-grid installations (a reserved category for the Indian Subcontinent and Sub-Saharan Africa regions) will amount to less than 1% of installed capacity.

However, that 1% will be invaluable to these communities in providing hundreds of millions of people with access to clean and resilient electricity they currently lack. 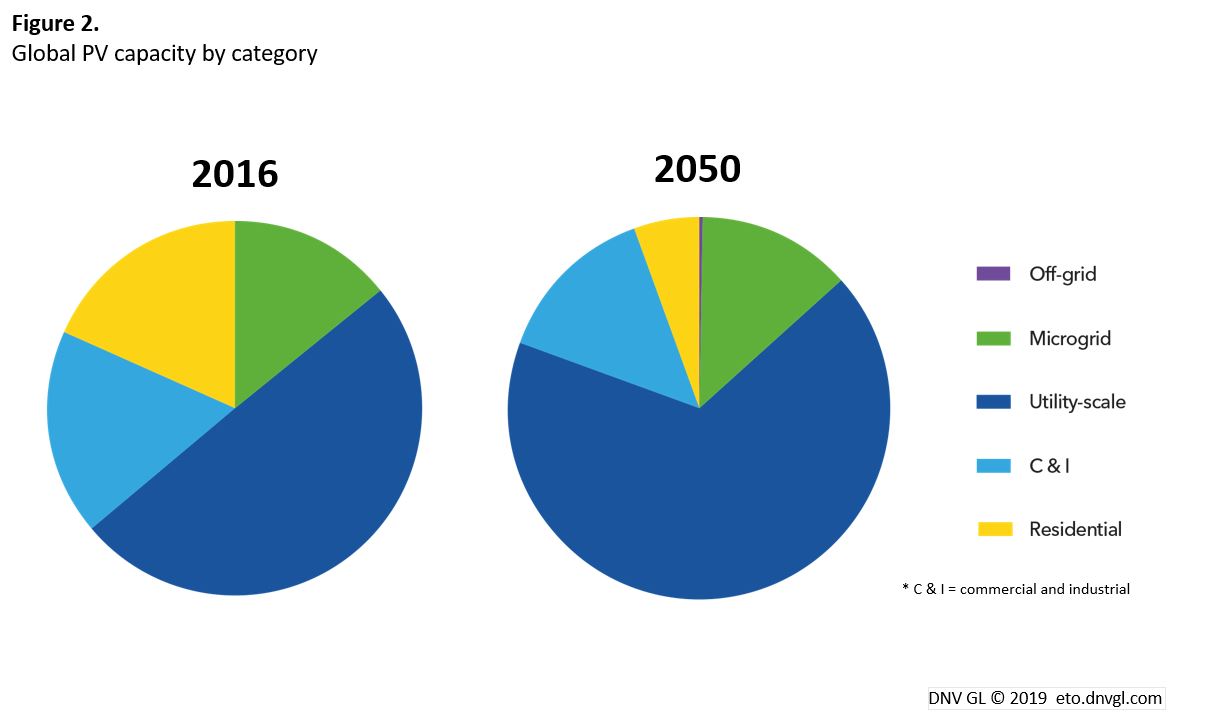 There are differences between the relative costs and merits of the various PV classes in the ten regions. But these differences do not alter our key finding: that each of the regions differs little from a global PV picture in 2050, showing utility scale on top, with between 40% and 60% of capacity, and commercial & industrial or microgrids each assuming between 10% and 30% of the total PV capacity. Sub-Saharan Africa is the exception to this picture. There, off-grid installations will serve as the second largest installed category with just over 15% of its regional PV capacity in 2050, allowing many millions of households to leapfrog into a clean, low-cost energy future. 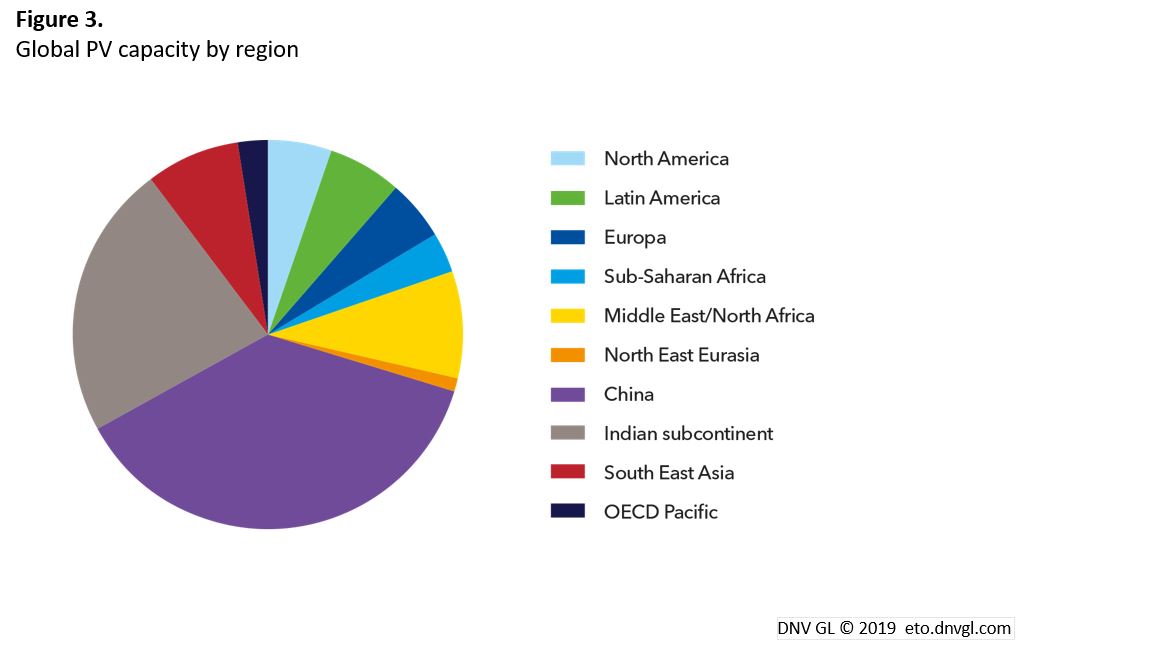 China will experience ‘peak energy’ in the 2030s, and from that point to 2050 its total energy consumption will fall by one quarter. However, the region’s electricity consumption will grow uninterruptedly, reaching some 18 PWh by mid-century. Almost 60% of that power will be PV generated – a result of China installing more PV than any other region.

While, China will lead the way with PV, the Indian Subcontinent will catch up rapidly. That region will have installed at least 50% of the capacity installed by their Chinese neighbours by 2050. As can be seen from the chart below, China and India will together possess 60% of global PV capacity by 2050, primarily due to their increased electricity consumption and large populations now and in the future.2 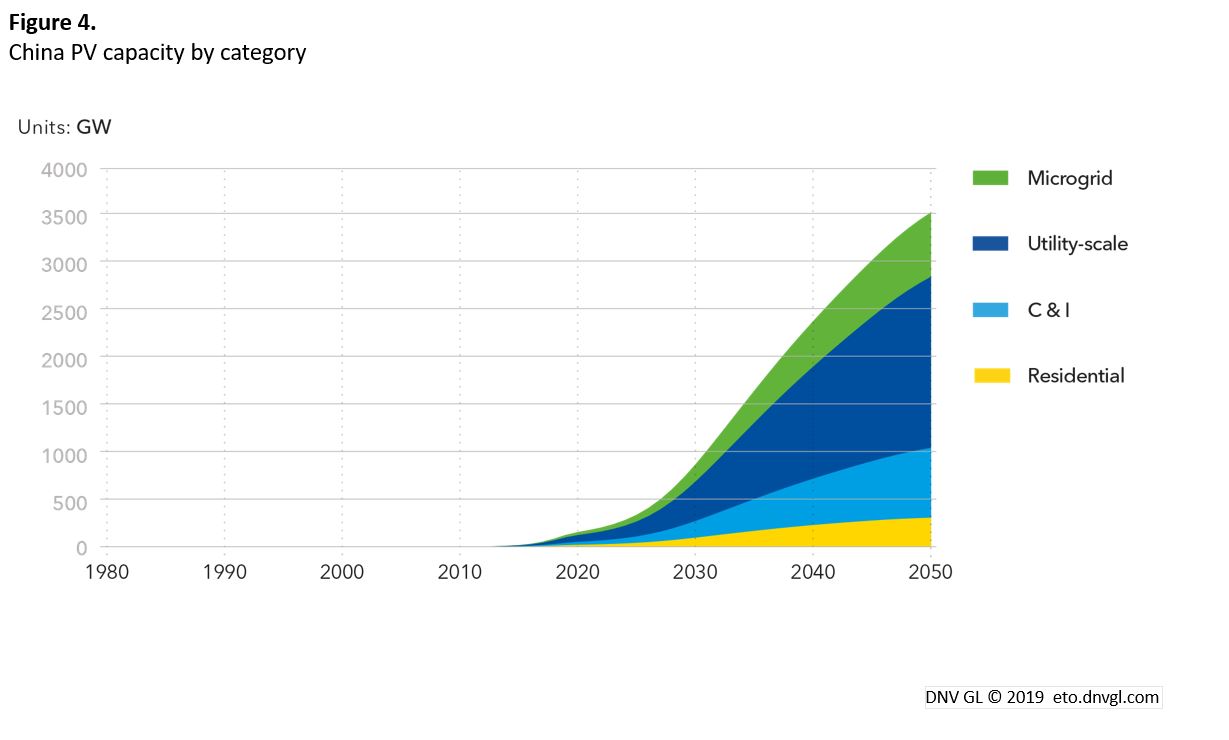 Sub-Saharan Africa will see a unique dynamic unfold over the next two decades. During this time, off-grid PV installations will be the dominant solar segment. Electricity requirements in a large fraction of very poor households will remain limited and will be well-served by very inexpensive and small capacity off-grid installations, thus enabling access to clean and affordable energy – in line with the UN Sustainable Development Goal #7.

However, as standards of living continue to improve, the combination of higher household energy requirements, and changing relative costs, will be best served by the cost effectiveness of utility scale PV resources. By 2040, utility scale capacity will displace off-grid and take over the role as the dominant PV class in Sub-Saharan Africa, just as in all other regions. 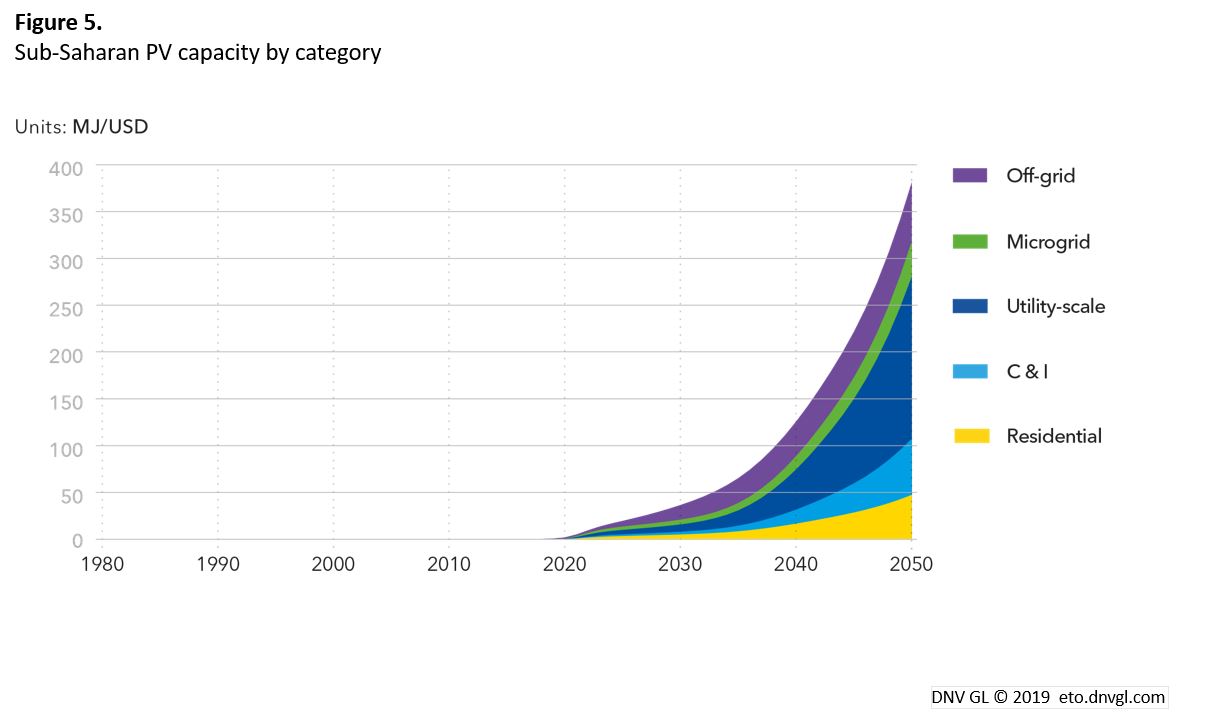 Very substantial PV projects are going to be increasingly available as investment targets for the financial community in the decades to come.

The sheer magnitude of the coming PV revolution is hard to comprehend. As stated, we estimate that between now and mid-century, the world will see a 65-fold increase in PV installations relative to 2016. We foresee no significant spatial or resource-related limitations to this spectacular growth.

But how will PV grow? In the eyes of many, distributed solar is the way of the future. However, DNV’s analysis finds that economies of scale will continue to outstrip distributed power cost advantages such that utility-scale power will provide between 40 and 60% of PV capacity in 2050.

So, the outlook is very bright for the growth of solar and supporting assets. However, an important challenge to consider is the ability of the solar industry to attract the substantial financial capital required to support this acceleration and growth across diverse markets and categories around the globe. There may be a limit to the speed and volume at which financial capital will be available to support this acceleration of development and deployment. We, as an industry, are actively working to improve the transparency and efficiency of financial transactions and due diligence, thereby lowering project and financial risk to investors.

Very substantial PV projects are going to be increasingly available as investment targets for the financial community in the decades to come. This runs counter to the belief that the renewables sector is fatally fragmented. In addition, the rapid growth of large-scale projects will help to concentrate and accelerate the diffusion of the solar industry’s combined technical expertise – helping to move the energy industry towards the future we predict.

2. The regions referred to in this article as 'China' and 'India' denote Greater China (mainland China, including Hong Kong, Macau and Taiwan) and the Indian Subcontinent (India, Pakistan, Afghanistan, Bangladesh, Sri Lanka, Nepal, Bhutan and the Maldives).

The suitability, reliability and robustness of new and existing solar technology

Explore our forecast to 2050