The fossil slice of the primary energy pie shrinks by around one percentage point per year, going from 80% now to just below 50% in 2050.

— peaked at 8 Gt per year in 2014. Since then, total demand for coal has and will decline. The pandemic reduced coal demand by 7% in 2020. The demand rebound will not reach its previous peak, instead coal use will fall almost two-thirds from current levels by 2050.

— In 2020, demand was 75 million barrels per day (Mb/d) excluding natural gas liquids and biofuels. We predict a peak in 2025, at 86 Mb/d, 15% above today's level, before going into steady long-term decline. Demand will decrease slowly between 2025 and 2035, after which the decline becomes relatively steep, averag- ing -2.4% per year over the period 2035–2050. In 2050, expected global oil demand of 56 Mb/d (115 EJ) will be 45% lower than today. This decline is linked largely to falling demand in the transport sector, down 45% in the next 28 years. Production will be concentrated ever more strongly in Middle East and North Africa.

— peaks in 2036 and slowly tapers off to end some 10% below today's levels. It surpasses oil as the largest source of primary energy in the late 2040s. Gas has staying power owing to its diversity of uses — half of the demand for gas is as final energy in manufacturing, transport and buildings, and the other half through transformation for other final uses like electricity, petrochemicals and hydrogen production. Demand will vary considerably across regions: declining in OECD countries, growing in Greater China, but peaking there in the early 2030s, and tripling in the Indian Subconti- nent by 2050.

By mid-century, just 12% of gas will be carbon free, of which hydrogen will supply roughly one quarter, with the balance made up through CCS in power and industry, and by biomethane. In modelling gas demand, we assume that today’s high prices persist through 2024 before gradually returning to 2021 levels. Sensitivity tests run with high prices lasting for six and up to 12 years show how that will damage the outlook for gas globally and in Europe in particular – where its use will halve within a decade. 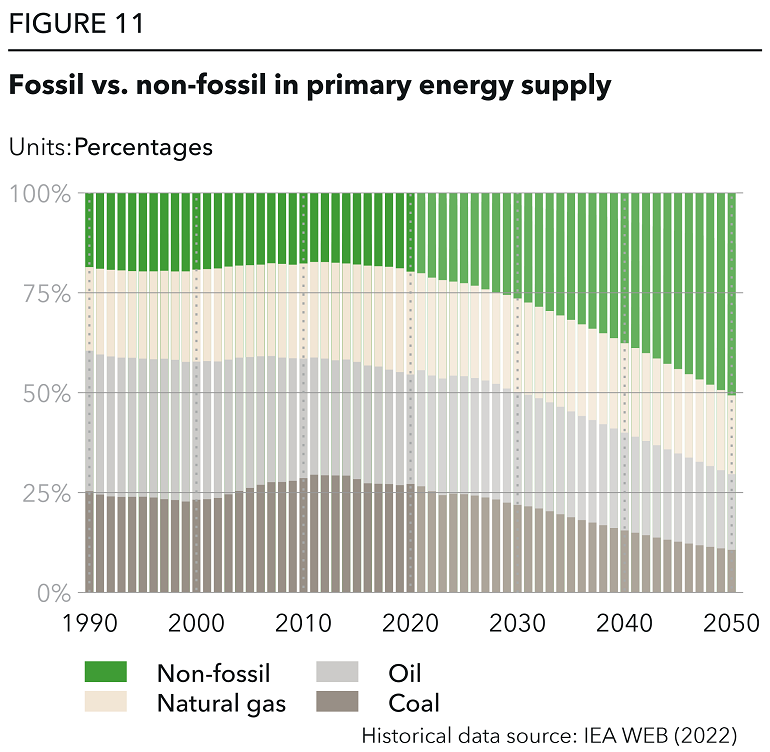