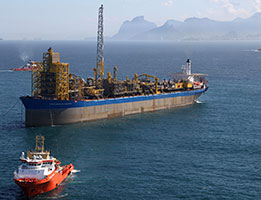 Sesam is growing in use within SBM Offshore.
Gerard Bakker

SBM Offshore is a global leader in designing, building and operating FPSOs, with 1 million barrels of oil per day going through their vessels across the world. For the heightened demands of calculations for topsides on floating vessels, their choice is DNV’s Sesam.

Gerard Bakker is Senior Expert Engineer Topsides at SBM, and has worked at the company for 15 years. For 13 years, SBM has been using Sesam products, a timespan during which demands on both classification and the software have grown. In addition, the calculations involved for building fixed structures on floating vessels – SBM’s core business – is more challenging on many levels.

“There are far more demands in comparison to the jacket market,” says Bakker, whose original background was aerospace engineering. “The vessel rolls, so there is far more analysis to do, larger fatigue demands to calculate, more transverse loading and more load calculations.”

An example is the comparison of a fixed tower to a tower on a vessel. The rotational accelerations are magnified by the height of the tower. As taller towers become the norm, the calculated forces are greater and more variable. A tower on a fixed structure will have eight load cases. For the FPSO tower, there will be 128 load cases, and sometimes there will be a need for three or four drafts. “We’re then already talking about 500 load cases, and you can’t rule out one. You have to just do them all, and do the summary. In the past, because of the limits of computers, you wouldn’t be able to do it. They’re getting faster, so now you can do them,” says Bakker.

The use of Sesam for fixed structures has evolved during the years, as it was originally purchased by SBM for fatigue check of flare towers and strength code check of beams especially. GeniE is still being used for this, in addition to its use on design of topsides.

“One of the strengths of Sesam is the functionality of modelling plates and beams in combination,” says Bakker, who is the main user of Sesam at SBM. The demands of class have changed since Bakker started using the program more than a decade ago.

“The demands are growing. It used to be that you could model only the beams – now we model half the vessel. We need software that is flexible in combining beams and plates,” he says.

Newly hired engineers are more graphically oriented, and use GeniE’s graphic interface. Bakker is more used to using scripting that is built in the software, JScript. That way he personalises the input, and gains tight control of things such as naming elements. “The readability gets better, and it saves me a lot of work,” he says. “The scripting is one of the strong points – especially for repetitive or parametric actions and batch files it helps a lot.”

A strength of Sesam is the naming. Some programs name elements inflexibly according to a number system, whereas Bakker gives elements names according to location, using tags such as ‘port’ and ‘starboard.’ This saves time when looking at the analyses. “Things don’t have numbers, they have names. It makes them easier to distinguish from each other.”

Despite the advancements of the software, Bakker emphasizes that it’s still important to do good engineering work and understand the basics. “You still have to set everything up well,” he says. “That hasn’t changed over the years. A lot of people forget that requirement because of the nice interface.” For SBM, the use of Sesam for offshore structural engineering works well integrated with other DNV software programs, such as Nauticus Hull (ship structural analysis and design).

“The pricing is competitive, especially with GeniE Lite,” says Bakker. “And with a flexi-licence you can go out to a site with a laptop, which is very useful.”

SBM has found a software partner that shares its focus on innovation. SBM not only designs and builds, it also operates the FPSOs. “We try to think differently, and to come up with different, new and innovative solutions,” says Bakker.