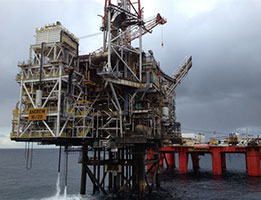 Our work is enabling the customers to assess structural risk at a level of detail and accuracy never previously possible, paving the way to major drilling and production developments.
Sue Cresswell

Atkins uses DNV’s Sesam software in hundreds of projects across the globe every year. Within asset integrity, advanced and accurate modelling leads to optimization of load carrying capacity of offshore structures, and the beneficiaries are Atkins customers.

Sue Cresswell, Chief Engineer in the Oil & Gas Structural Integrity Management business at Atkins, has been with the company for 25 years, and during 10 of those years the business has been using Sesam. Today there are 50 Atkins users of Sesam.

“When looking at existing structures, we have to do much more advanced analysis because we don’t have the flexibility to make design changes. This means that we need a greater understanding of the structure, and it involves a lot more non-linear analysis,” says Cresswell.

This approach is more demanding on the software, but advances both in computer hardware and the software now permit very large computer models with complex load conditions to be analysed relatively quickly. Among many successful projects, two recent projects for BP stand out, where Atkins engineers using Sesam made calculations that resulted in significant changes and increased efficiency.

The first was BP’s Andrew Area Development project in the central North Sea, where new facilities were to be installed on the topsides, and the increased weight required joint strengthening. Atkins used non-linear analysis to accurately calculate the amount of plastic strain in the existing topsides, after strengthening was installed. Atkins performed extensive verification on the baseline Sesam beam and column model before converting it to a non-linear finite element model.

Next, detailed shell models of the critical joints were developed and directly included in the global beam model. The final report led to an optimization of the joint strengthening.

Iain Manclark, BP’s regional Strategic Business Unit Technical Authority says, “AAD is one of the most significant brownfield projects BP has attempted in the North Sea, and it has had significant structural capacity challenges. Atkins interfaced seamlessly during an iterative design process with the main design contractor to develop a solution within BP’s design safety expectations. “This work has been a learning experience, and has expanded our understanding of the boundaries,” he says.

A previous assessment had used a coarse beam representation of the deck that underestimated its stiffness, severely limiting BP’s ability to install additional tensioned conductors as part of its planned future drilling programme.

The detailed model and accurate analysis methodology using Sesam for offshore structural engineering, correctly represented the deck stiffness and resulted in lower bending moments in the legs. The outcome was that the leg chords were found to have acceptable utilizations for all of the loading conditions considered.

The Atkins computer model included an accurate plate element representation of the SDA hull, detailed topsides load modelling and legs that were explicitly modelled using beam elements. The foundations were modelled using linear springs. Atkins considered numerous topsides and environmental loading scenarios during the verification analysis. The results demonstrated that the leg chords were significantly less utilized than had been reported, which reopened the possibility of BP’s future drilling programme. In addition the reason for the previous overestimation of utilization was determined.

Chris Morris, AGTR Offshore Structures Technical Authority at BP says, “There is a real prospect that, once loading conditions not considered during the verification have been checked (seismic, boat impact, etc), we will be able to drill more wells than currently anticipated - delivering significant additional business value to BP and its partners.”