Wind-farm-scale blockage has drawn a lot of attention during the last couple of years in the wind resource assessment community. But does its effect signify a downside to a project? Or is blockage only redistributing the power generation within the wind farm, without impact on the bottom line?

It’s been one year since Ørsted’s announcement on blockage (and wake) effects [1] and the wind industry has moved forward with the acceptance that wind-farm-scale blockage (also known as the Global Blockage Effect) exists. For ease, I will simply refer to it as ‘blockage’.

Whilst DNV had taken the lead on this [2] as early as 2018, with the provision of its blockage effect estimation tool (BEET) and the inclusion of a blockage related correction factor in its Energy Production Assessments (EPAs), other consultants are now following suit and accounting for blockage. This is not to say that blockage is done and dealt with. For example, as discussed at the Winterwind conference [3], model predictions from different consultants for the same wind farm can differ significantly. This calls for more work to measure and validate blockage in order to get to an industry consensus on how best to assess its effect on the wind farm yield.

How does blockage impact the power produced by a wind farm?
While efforts are ongoing (and will keep going for a while), there is one question that I wanted to address early on. In fact, this is possibly the blockage related question that I’ve heard the most over the course of last year: does blockage lead to an energy loss or does it only imply a redistribution of the energy among the turbines? Looking at the Pattern of Production (PoP) along a line of leading turbines, as can be derived from SCADA data, we often see plots (e.g. [4, 5]) as shown in Figure 1, where turbines at the end of the line (i.e. in the corners of the array) produce more than turbines in the middle of the line. When seeing such a trend, it is legitimate to question whether blockage only implies a redistribution of the power, i.e. does the power reduction for the turbines in the middle mean that the turbines in the corner will produce more than they would if operating in isolation? 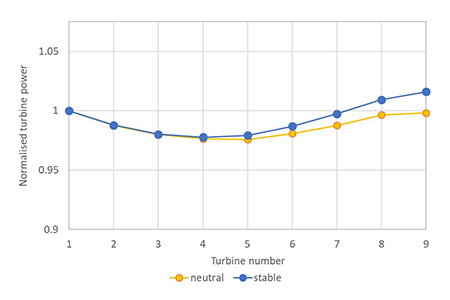 Figure 1. Example of normalized pattern of production along a line of leading turbines for two sets of stability conditions, with reference wind speed at hub height of 8 m/s. Normalization done with the power produced by turbine number 1, when the whole wind farm is operating. Data from CFD simulations. 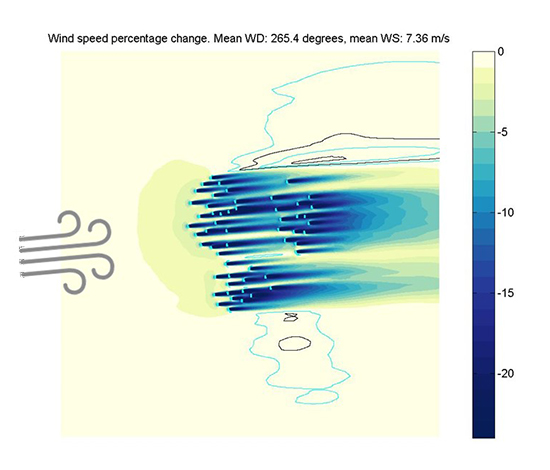 Furthermore, Computational Fluid Dynamics (CFD) simulations show that blockage, while causing a wind speed reduction upstream of the wind farm, also leads to a flow acceleration to the side of the wind farm (see Figure 2)1. So, does this acceleration past the corners mean that, on balance, no power is lost?

Sadly, even when providing good comparison with SCADA data, plots of normalized power (shown in Figure 1) only tell us about the secondary effects that blockage can have on the PoP. They cannot answer the question or provide us with a way to quantify the overall magnitude that blockage effects have on the power production.

One way to quantify the overall effect of blockage is to normalize the power produced by the leading turbines, when the whole wind farm is operating, against the power they each would produce if operating in isolation. While this can be easily done in the simulation world, this is unfortunately not something that can be expected for an actual wind farm, since no wind farm operator in their right mind will switch the wind farm off to operate the turbines one at a time! And even if they did, wind conditions would not remain stationary for long enough for the experiment to be carried out reliably. Still, this does not stop us from carrying out the experiment in the CFD world, and what this reveals, while not often shown, can be a bit of an eye opener.

The result of this numerical experiment, which is an appropriate way to derive a blockage loss factor for these leading turbines, is plotted in Figure 3. This clearly shows, for the wind farm in question, that the primary effect of blockage is to reduce the power for the entire line of leading turbines, more so for the turbines in the middle of the line than those in the corner. Also in this case the magnitude of the blockage effect is larger than what can be inferred from looking at the relative PoP only (i.e. Figure 1), and there is no doubt from Figure 3, that the effect implies a loss, not just a redistribution of the power along the line of leading turbines. 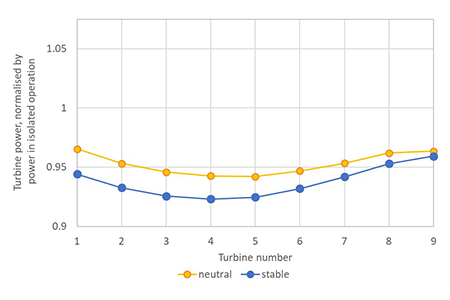 Figure 3. As Figure 1, for the same simulation conditions, but normalizing the power of each individual turbine by how much it would produce when operating in isolation.

For good measure, we should stress that from our experience so far, not all wind farms or flow configuration show an effect as clear as is shown here. For some cases, we see in our simulations that the turbines at either end of the line can sometimes produce slightly more when the wind farm operates than when in isolation. But in general, the average of the blockage factors along the leading turbines is below 1, for realistic atmospheric conditions.

Those of you knowing the field in depth might object that there is evidence in the literature, for wind farms consisting of a single line of turbines, where blockage appears to lead to an increase rather than a decrease in output. Our preliminary investigations for such particular cases suggest that even these single row cases are more likely to experience a turbine interaction loss than a gain. In our simulations, we have so far only seen a gain when the simulated conditions use assumptions departing from real conditions (for details please consult [6] or get in touch).

The impact on neighbouring wind farms
When looking at neighbouring clusters, in the same way that some isolated turbines can sometimes produce more in wind farm configuration than when operating in isolation, there is the possibility that when clusters operate near each other, the blockage from one cluster might re-direct some flow towards its neighbour and increase the production of the neighbour slightly for certain wind directions. Such an occurrence will warrant a specific analysis, and we haven’t gathered enough evidence at this point to understand how often (if ever) clusters would benefit from this when the effects are integrated in the whole local wind climate.

Blockage and wakes
Another element to the discussion on loss vs redistribution comes from the fact that blockage and wakes are tightly coupled. If the turbines at the leading edge produce less than they would when operating in isolation, the implication is that the wake deficit behind these turbines will be reduced too, which in turn will affect the production of turbines within the wind farm. Thus, blockage and wakes cannot be decoupled. This argument has been used by some authors [7] to advocate that with blockage related losses at the leading row comes energy redistribution downstream within the array, and therefore, a blockage loss factor calculated from the power reduction seen at the leading turbines cannot carry through to the whole array. While we wholeheartedly agree with the fact that blockage and wakes are tightly coupled, it must be recognized that this physical coupling is also implicit in the SCADA data. Therefore, whatever redistribution of power exists from leading turbines to downstream turbines, it is also ‘baked in’ the SCADA data. The implication is that when a wake model is calibrated to match a PoP from SCADA data, it is calibrated using the wake effect and the redistribution that results from the existence of blockage. While the wind industry (us included) tends to refer to traditional wake models as ‘wakes-only’ models, it is important to realize that this does not mean ‘pure wakes’ (i.e. wakes without the secondary effects of blockage). Indeed, blockage existed (and affected power production at the leading edge and within the wind farms) before we started to account for it! From these arguments, it follows that, as long as the ‘wakes-only’ models faithfully capture the PoP within the array, the magnitude of the prediction bias for the leading turbines carries through for the whole wind farm. Hence, wakes-only models require a correction equal to the blockage loss of the leading turbines.

Of course, although this approach corrects for a blockage-related bias in wakes-only models, predictions errors will still occur and they will vary from site to site (e.g. at some wind farms the model will predict downstream turbines to produce too much, at some others, too little); these errors should be accounted for in attributed uncertainties and should not be confused with bias.

At this point, it is also worth saying that, when solving RANS equations in elliptic mode, the coupling between wakes and blockage is included in CFD simulations. In fact, the true output from the CFD is the total turbine interaction loss factor (in other words coupled wakes and blockage), rather than separate ‘wakes-only’ and blockage related correction factor. In essence, the framework described in [2] to calculate a blockage related correction factor is very much an accounting framework, designed to quantify the part of the loss that is missing from ‘wakes-only’ models. The model output is processed in a such way that the derived correction factors can be consistently applied on top of the loss factors derived from ‘wakes-only’ models. As long as the ‘wakes-only’ model does its job, which is to accurately predict the PoP within the array, and as long as the blockage for the leading turbines has been derived (directly, or via a surrogate engineering model) from a model that treated blockage and wakes in a coupled way (also accurately capturing the wake losses within the array), the framework proposed is valid. And the question about redistribution of power between upstream and downstream turbines is resolved. However, if the ‘wakes-only’ models are proven to consistently fail (and this may happen as clusters become significantly larger than the clusters on which these models have been validated), then the discussion will be re-opened.

To conclude, as you will have gathered by now, blockage is indeed tightly coupled with wake effects and it does influence the distribution of energy production across a wind farm. However, there is also little doubt from elliptic CFD simulations that blockage contributes to turbine interaction loss—and further, it represents a material bias in traditional prediction models, fully equal to the blockage loss in the leading turbines. But then again, CFD, just like all blockage models out there, is only just a model. While we have already gathered a lot of validation, both onshore and offshore, further validation from actual wind farms will be required to decide whether the models capture the magnitude of the effect correctly. And since we saw that SCADA data for leading turbines can only be used to validate secondary effects of blockage, for the absolute blockage validation, we shall require different data sets. In particular, data sets that can help us characterize the background flow conditions several kilometres upstream of the wind farm (long range lidar, SAR?) will be very useful. Expect to see a lot more about this in the coming years!