Monitoring and recording wind speed trends can provide valuable insights to assess project performance. But interpreting, understanding, and acting on those trends is where the real value lies. So, what do the 2021 UK and Ireland wind results mean to you?

2021 wind speed trends
The windiness index followed a rather normal trend across 2021 based on the seasonality of wind resource in the UK and Ireland, except for the amplitude of the wind speeds which were consistently below average. Most months would be considered normal and fall within the standard deviation of the long-term period. However, in the UK, April (81.6%) and July (76.8%) experienced the lowest wind speeds since 1996, while in Ireland, July (72.2%) saw the lowest wind speeds since 1996.

Overall, DNV’s UK Wind Index demonstrates that 2021 was 7% less windy on average than the 1996-2021 long-term reference (93.23%), while the equivalent Irish results were very similar, being 6.4% less windy (93.60%). A full breakdown of the monthly and quarterly wind indices for 2021 is given in the tables below, along with the ‘windiness’ for each complete year in the index. For ease of referencing, the monthly index for 2021 is also shown. 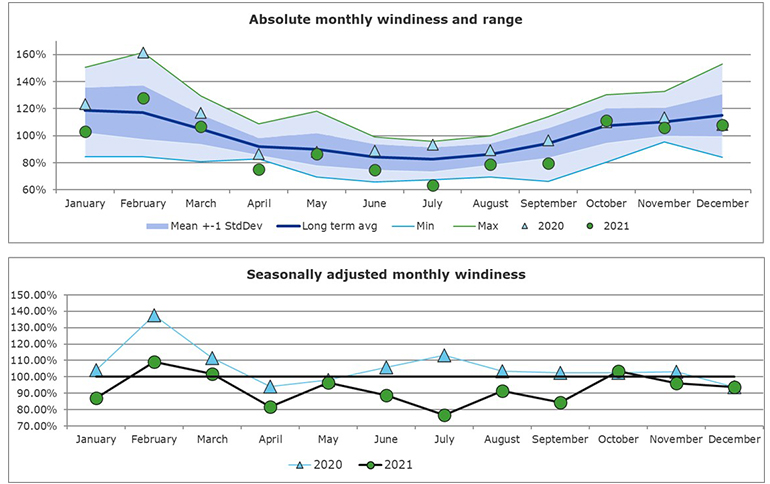 Monthly Windiness for the UK

The year started slowly with January exhibiting wind speeds 13% and 12% lower than the long-term speeds in the UK and Ireland respectively. Wind speeds in February and March were higher than usual (10% and 2% respectively in the UK and 15% and 2% in Ireland). This was largely due to the higher-than-normal wind speeds caused by storm Darcy (6-8 February). In the UK, the first three months of the year were 1.3% lower than the respective mean mainly due to a weak January (98.7%) but in Ireland conversely, the same period was 1.1% higher than the respective mean mainly due to a strong February (115%). 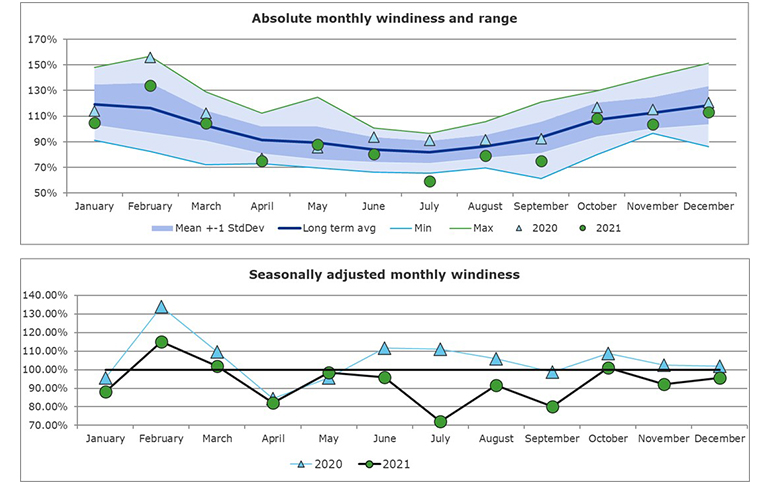 The index for April, May and June was calculated at 89% for the UK and 92% for Ireland which indicated a drop in wind speeds mainly due to the low wind resource seen in April and June. In fact, April 2021 was a record low during the entire period of reference (1996-2021) for the UK. The downward trend persisted in July, August, and September (84.2% in the UK and 81.4% in Ireland) with all three months recording lower than usual wind speeds with July also being a record low month. 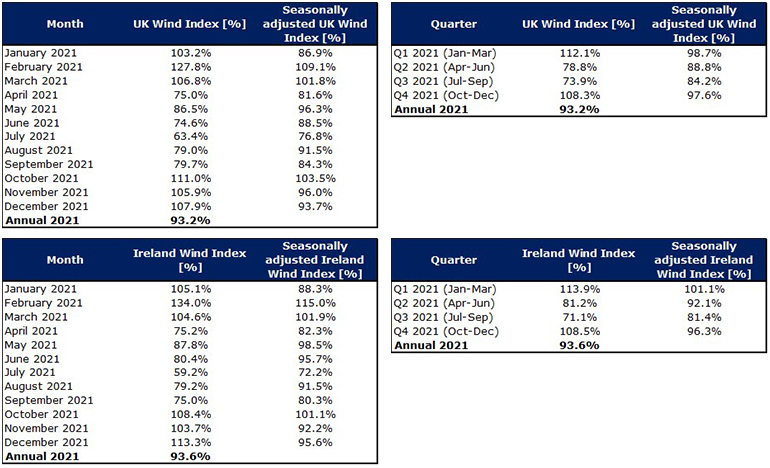 Regional variations
It is also important to consider the spatial distribution of the wind regime across the countries during the last year. Looking at the windiness maps for the UK below, we can observe that despite the entire country observing negative trends throughout the year, wind farms in the Southwest had slightly higher wind speeds than usual in the first three months of the year. However, Scotland and the Midlands observed much lower wind speeds on an annual basis than the southern parts of the UK. 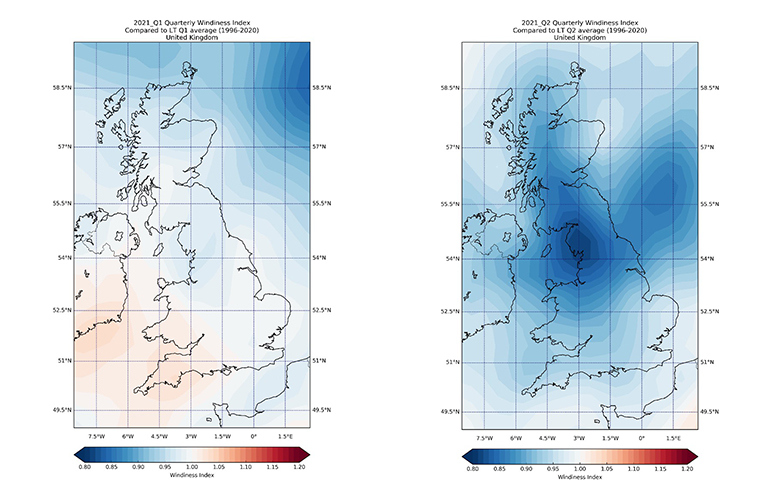 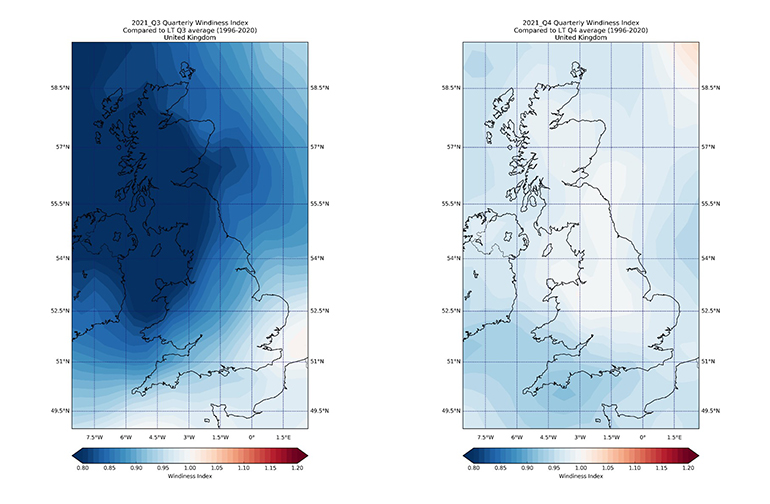 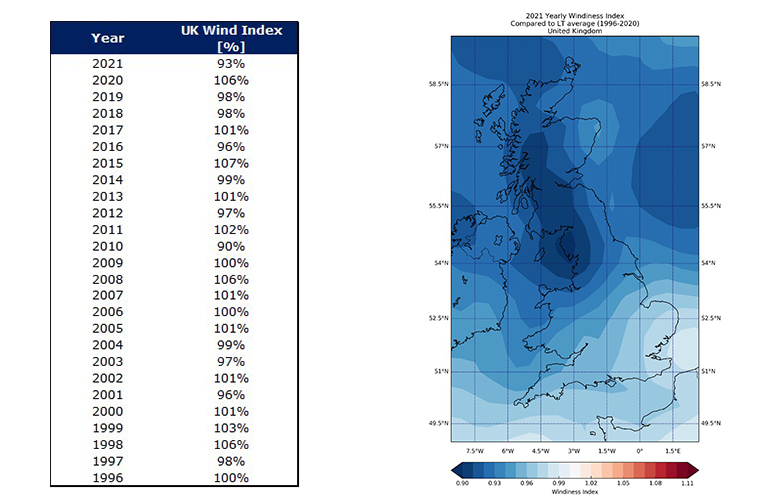 In Ireland, it can be observed that despite the entire country seeing negative trends throughout the year, wind farms in Northern Ireland observed larger negative deviations as a negative anomaly centre could be observed at the Irish Sea. 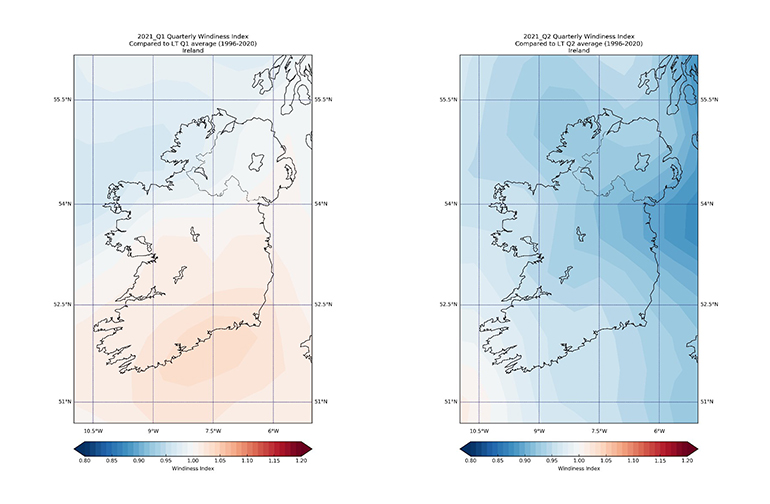 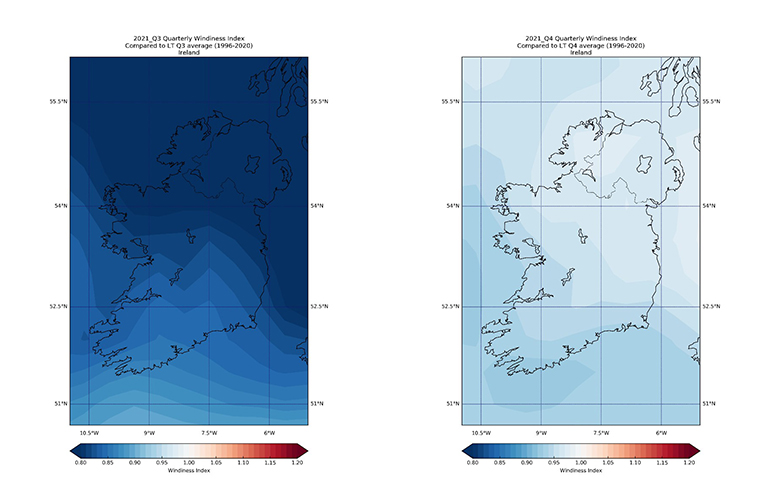 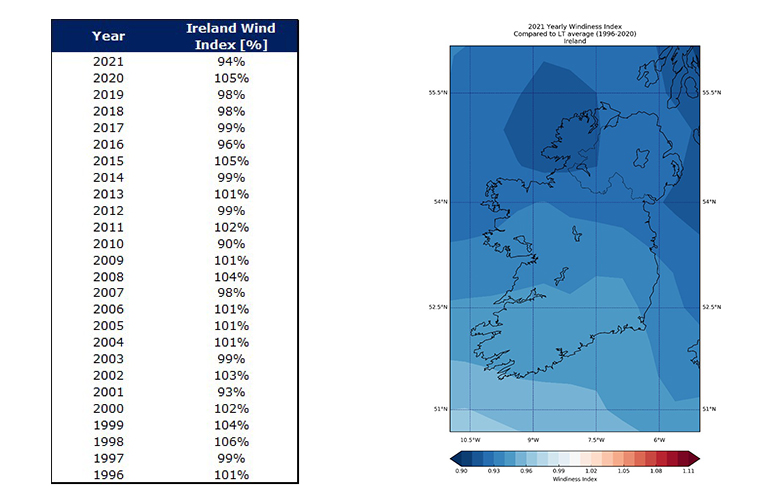 Long-term averages
For clarity, long term graphs for both the UK and Ireland are shown to illustrate the fluctuation of windiness indices since 1996. 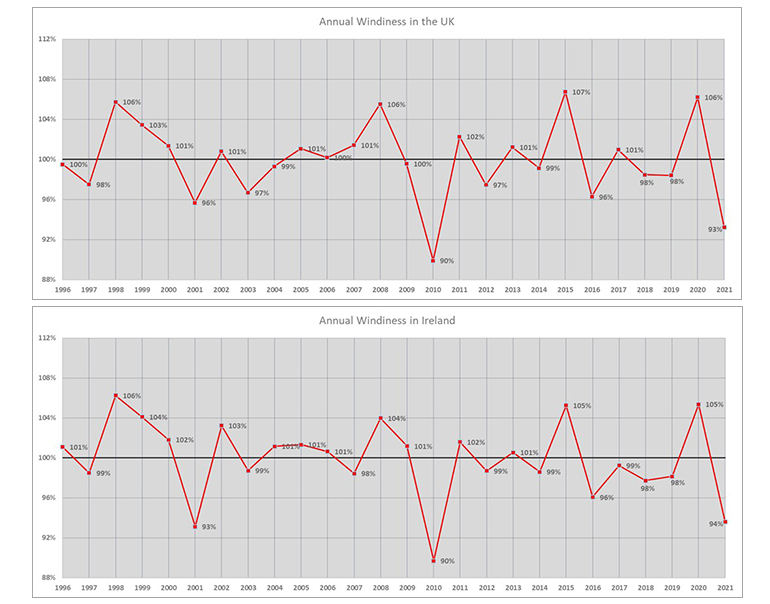 Interpreting the data to establish an answer
But what does the drop in mean wind speed during 2021 represent for wind farm owners, investors, and developers? All other things being equal, wind farm owners can expect to have seen lower production at UK and Irish projects during 2021, compared to the long-term, because of the decreased windiness. Using typical project wind speed to energy sensitivity ratios, it is noted that a 2% drop in wind speed corresponds to a decrease of approximately 3-4% in terms of energy production. This should be taken into consideration during reviews of project performance. Investors will have seen lower energy productions in their wind projects when compared to 2020. This is mainly due to lower wind resources, particularly during the traditionally windy first and last quarter of the year.

However, the observed 2021 deviation from the long-term mean wind speed is noted to fall on a negative extreme but still within the expected range of wind speed inter-annual variability. Therefore, whilst 2021 has had a below-average wind speed, this event is expected to be covered by “industry standard” assumptions for future wind speed uncertainty, as modelled in energy production assessments.

The UK and Irish Wind Indices
DNV maintains a UK and Ireland Wind Index, which enables owners and investors to assess the performance of potential or operating projects. Likewise, the Wind Index is a robust tool for wind farm developers, empowering them to understand the ‘windiness’ of their wind monitoring campaigns compared to a long-term period.

To be more precise, the windiness of any given period is expressed as a percentage of the long-term average wind speed for that specific period. For example, the long-term windiness of the month of January is 118%. If a specific (individual) January has an index value of 123%, the seasonally adjusted value for that January would be 123%/118% = 104% (+4%).

About DNV
DNV offers a new service for generating bespoke monthly Windiness Reports for your portfolio. This includes an average of your entire portfolio and a breakdown of each one of your assets. For more information, please contact Ioannis Agiol.