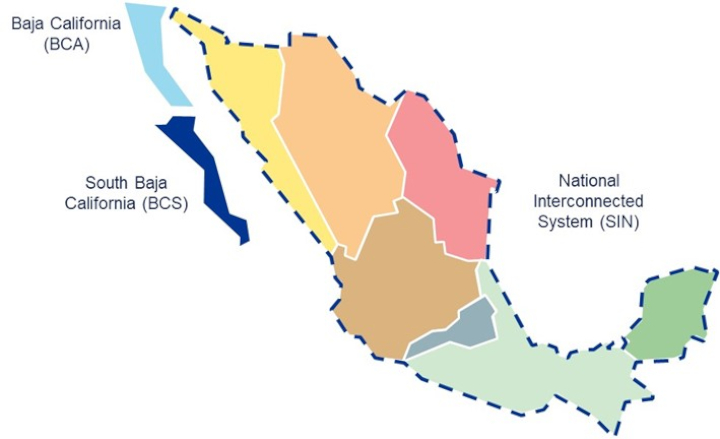 Since 2019, the isolated Baja California Interconnected System (BCA) in Mexico has relied on temporary generators to help meet demand during the summer, when air conditioner use increases. The installed capacity in BCA totals 3,315 MW, which is barely enough to cover the forecasted peak load of 3,307 MW between June and September of 2022.

This year, for the first time, South Baja California will join Baja California in activating the Corrective Protocol1, a short-term preventive measure carried out by the system operator, CENACE, to cover energy demand over a period when the generation will not meet demand. The protocol will temporarily install 600 MW of extra capacity by allowing Responsible Load Entities, like CFE SSB or Qualified Users which are responsible for their Load Centers, to incorporate mobile units to generate energy where needed, typically with diesel generators. Once the high-demand season is over, the additional capacity returns to its original location.

BCA's Protocol consists of two phases: P1, which will deliver 390 MW constantly from June to September, and P2, which will generate 210 MW during the peak hours (11 AM to 12 AM) of July and August.

The Corrective Protocol in the South Baja California electric system (BCS) will employ two 20 MW mobile units, which will operate at max capacity from June to September in 2022. Contrary to BCA, this last resort contingency is still new to BCS and the demand to cover is much smaller. Although electricity consumption in 2022 should peak at 560 MW, and BCS has 620 MW of available energy, the system requires a higher operating reserve margin of available capacity to ensure reliability (11% plus 37 MW in case a generator fails).

The preventive measures employed by the two isolated systems of the Baja California Peninsula should be enough to secure energy access in the region for 2022. However, the Corrective Protocol is a last resort mechanism that should not be relied upon constantly. Several options could have prevented these extreme events and several others can help address the challenge in the future.

For several years, the government considered interconnecting both regions with the National Interconnected System (SIN). For BCS, there were plans to build a line that would pass through the Sea of Cortez, while for BCA, the project consisted of a line that would connect the system with the Northwest region of the SIN, specifically in Sonora. Both projects would have benefited BCA, BCS, and the SIN by enabling BCA and BCS to import energy during periods of high demand and providing an escape route for the excess solar energy produced in the Northwest region of the SIN. However, the BCS-SIN interconnection is permanently canceled and the future of the line connecting Baja California and Sonora remains uncertain. While this last project does not appear in the new Program for the Development of the National Electric System (Prodesen), published by the Ministry of Energy on May 31st, government officials in Baja California and Sonora have implied that the line will get built along with the Puerto Peñasco solar plant in Sonora. 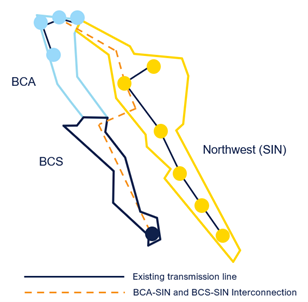 Earlier development of solar power plants would have also been ideal since the supply imbalance started in 2019. Moreover, installing more solar PV capacity in Baja California would mitigate the deployment of emergency measures since peak demand occurs when the sun is still shining. However, the development of more solar capacity remains on hold as some projects continue to wait for their Generation Permits. As such, growth in the short term is unlikely due to market uncertainty. More solar PV in BCA would also reduce Greenhouse Gas (GHG) emissions generated by the Corrective Protocol since most mobile units use diesel. Additionally, commissioning more photovoltaic capacity would make more economic sense as diesel-based generation has much higher variable costs than solar, particularly now since the price of oil and its derivatives are remarkably high.

In the most likely scenario, Baja California will overcome its current situation with thermal power plants. The CFE plans to build five projects that will add over 2,500 MW to the BCA system in the coming years. However, the development status of these generators is unknown, and their COD is uncertain. The power plants will not be ready until 2025.

On the other hand, South Baja California could overcome its supply challenge in the short-term. There are already commissioned power plants that are only waiting for an update of their generation permits to go fully operational. If the CRE allows it, there is 143 MW of capacity ready to go into operation that would more than compensate for the 40 MW needed to secure supply and reliability. The new capacity would also have a much lower carbon intensity since it consists of wind power and natural gas instead of diesel.

The commissioning of the power plants above depends on CFE and the development stage of the assets The challenge of fixing the energy supply imbalance in both BCA and BCS systems has several solutions. However, the current state of the electricity sector does not allow market participants to implement long-term remedies fast enough. Instead, BCA and BCS must rely on expensive short-term emergency measures. The Corrective Protocol of the Baja California system in 2022 requires installing 20% of the total capacity for four months and then uninstalling it. Furthermore, this exposes an unbalance between the installed capacity and electricity demand of equal proportion in the BCA system. By not implementing a long-term solution, the insufficiency will continue to grow, making it harder to meet future demand in the summer. In addition, implementing the Corrective Protocol has a heavy environmental toll, increasing the carbon intensity of both isolated systems, moving them further away from the global trend towards low-carbon systems and delaying Mexico’s journey to decarbonization.