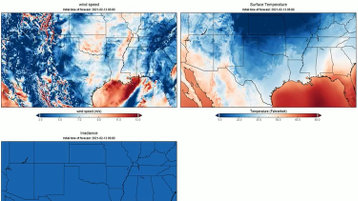 Between February 11 to February 19, a deepening area of low pressure, colloquially called the polar vortex, shifted south into the southern Great Plains, allowing cold, arctic air to advect far south into central Texas. As a result, the central part of the country experienced significantly colder than average temperatures. There were parts of Texas that saw an over 50ºF (-25ºC) departure from normal temperatures as shown in Figure 1. 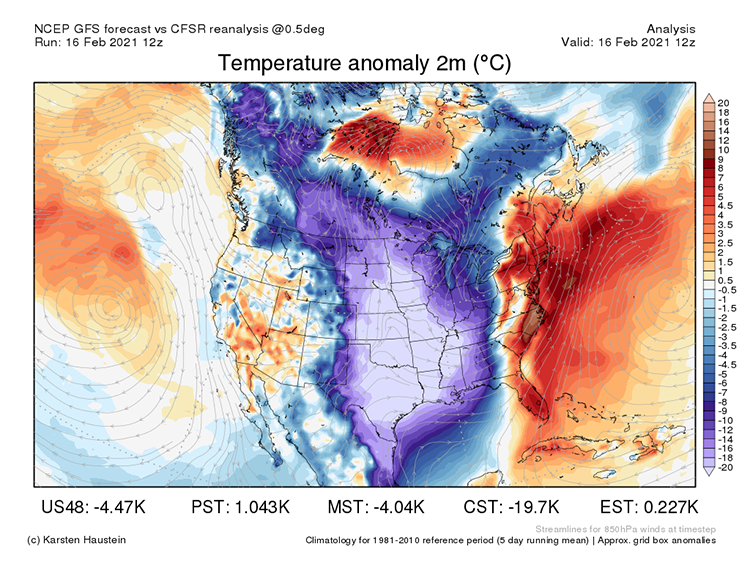 Houston reached a record low of approximately 14°F  during the morning of February 16th, while Dallas dropped to a near record low of -1°F .  While this Artic blast is quite significant in recent memory, this is not the coldest on record.  The -1 °F recorded in Dallas was tied for December 1989 .  It was in fact colder in January 1949 and February 1899.

The shift of the Polar Vortex further south was anticipated 10+ days in advance as a sudden stratospheric warming event occurred, which is well understood to break down the Polar Vortex and allow it to drop further south . As shown in Figure 2, the polar vortex in the stratosphere was breaking down around January 1st, which later subsequently shifted the tropospheric jet stream substantially south unlocking the arctic cold air into lower latitudes. 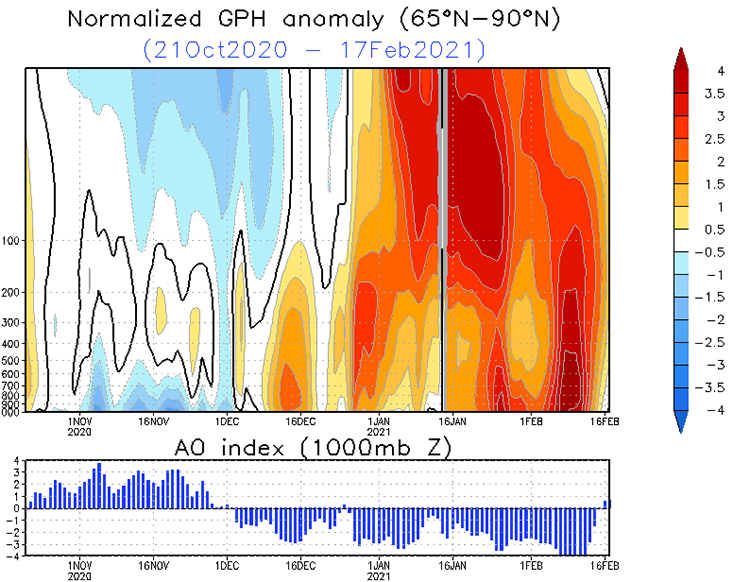 Although the intrusion of the polar vortex into the southern Great Plains may sound alarming, it is not unusual, as a cool air masses often extend across the region for short periods of time during the winter months. There have been a handful of cases in recent history with a similar weather pattern. Figure 2 below presents a map of the temperature anomaly during a record cold snap in 1989 where the coldest temperature in Houston was 7 degrees and Figure 4 shows a similar pattern observed during a cold snap in 1983 as well where the coldest temperature in Houston was 11 degrees. 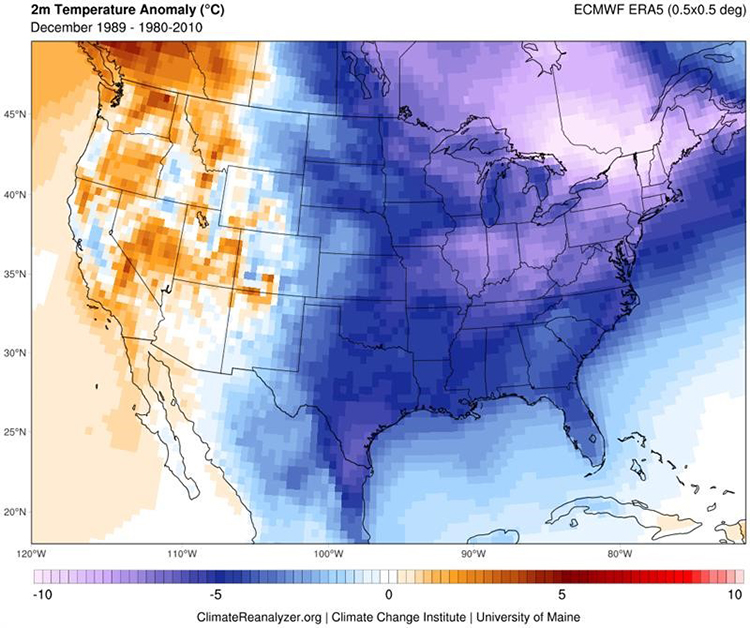 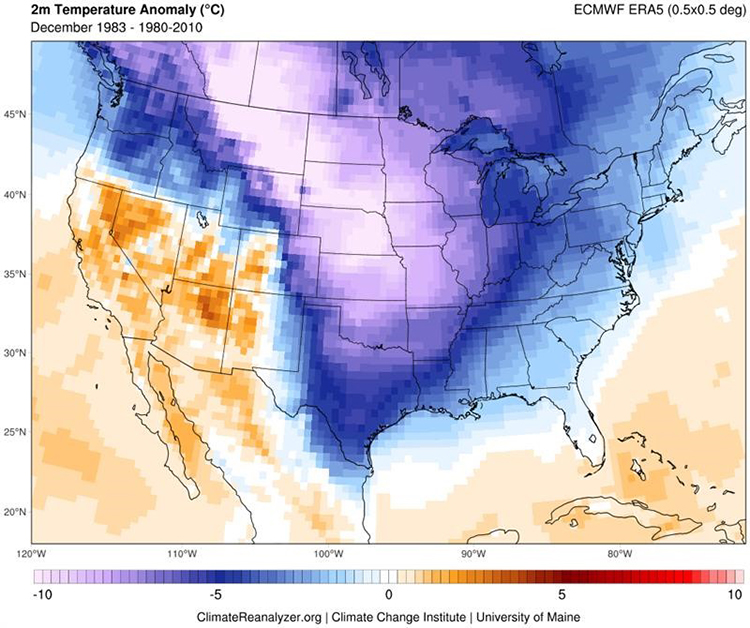 One of the more unique aspects of this current cold snap is its geographic extent. As illustrated in the temperature anomaly maps above, the previous cold snaps in 1989 and 1983 did not appear to extend across all Texas. The extent of the current cold snap over major population centers exacerbated power demand constraints.

In terms of duration, the latest cold snap, although abnormal, is not the most extreme example. When examining daily minimum temperatures below freezing, the December 1983 cold snap in Houston lasted for more than 10 consecutive days , while the recent February 2021 cold snap lasted for a total of 6 days , as shown in Figure 5. It is important to note that the February 2021 cold snap is not necessarily a record setter, but is still notable.

The duration and magnitude of the 2021 cold snap was predicted well ahead of time, as illustrated by a February 9th hourly temperature forecast for the Houston International Airport, as shown in Figure 5. Based on the measured hourly average temperatures it appears that the forecasted 6-day duration cold snap with daily minimum temperatures below freezing was correct, as shown in Table 1. 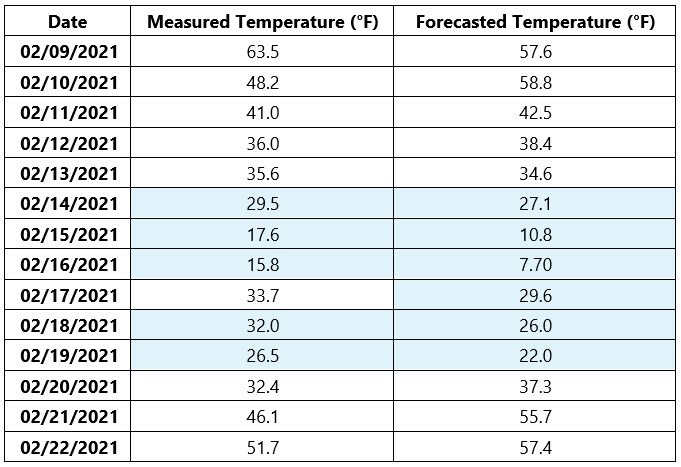 Forecasted temperature values were obtained from forecasts issued on February 9th, as modeled by the Global Forecast System (GFS). The GFS model is one member of an ensemble of numerical weather prediction models (NWP) models used by the National Weather Service (NWS). The forecasted temperatures presented in the figure will be similar to but not exactly match the official forecast values issued by the NWS.

Figure 6 also demonstrates the impact of the cold snap on the day ahead locational marginal price (LMP) at a Dallas settlement point. The first two days of the cold snap had minimal impact on pricing as most utilities and operators are prepared for 2 to 3-day cold snaps, and fuel supplies had not yet frozen. However, as temperatures continued to drop and remained below freezing for the next several days the LMP responded in force with prices exceeding 9000 $/MWh. 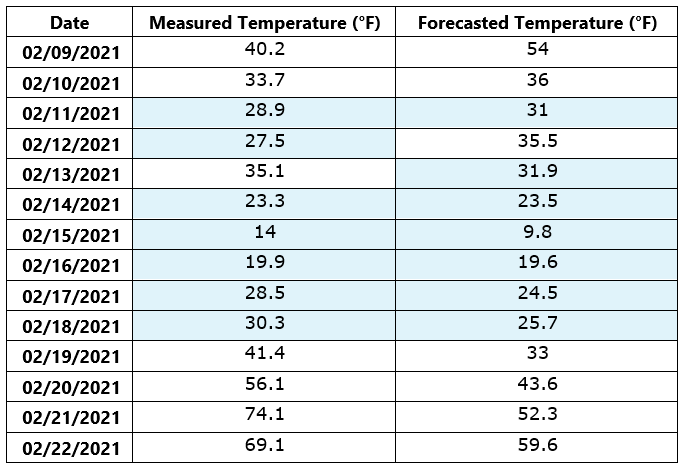 While it was cold during this stretch of weather and numerous generation sources had supply issues it can be useful for grid and resource planning purposes to understand the potential wind resource that was present across the region. Figure 7 presents a snapshot from the High-Resolution Rapid Refresh (HRRR) model analysis field at 11 am CST on February 15th. While parts of western Texas had relatively weak 80 m wind speeds eastern Texas had moderate-level winds. Even without cold weather impacts, wind generation across West Central Texas would have only been moderate-to-low, as it was forecasted to be. However, what is most notable here is that the wind speeds just off the coast in the Gulf of Mexico were significant. When cold air outbreaks like this occur the strong temperature differential between the ocean and land can drive strong winds just offshore. Furthermore, while cold surface temperatures across eastern Texas impacted wind generation, temperatures in Gulf were significantly warmer and within the range of normal operating conditions for most turbines. Figure 7 also illustrates that while winds were calm across West Central Texas the available solar resource was significant as the cold, dry air kept clouds at bay. Although solar generation may have been impacted by snow or temperature (CSP vs PV) it is important to understand that the resource was there.  As would be expected, the wind speed and trend shown above was not persistent throughout the entire cold snap period, as there were clear diurnal fluctuations in the temperature and wind speed trends. However, as shown in the animation below, this trend of strong offshore winds was present during periods of each of the cold snap days. 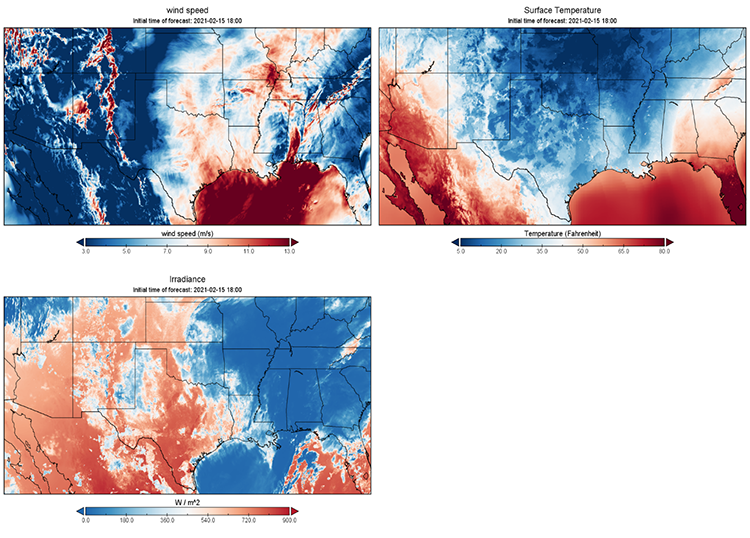 In summary, between February 11th and 19th there was a high amplitude, long duration cold snap across nearly all of Texas. The geographic extent of these departures appears to be larger than in years past. The cold temperatures associated with the cold snap were not necessarily record-breaking, but are the coldest in recent memory (i.e. over the last 30 years). The last time temperatures across southern Texas were this cold, Texas had roughly ½ its current population – a likely contributor factor to the infrastructure – such as the electrical grid. In addition, the persistence of daily maximum temperatures below freezing for much of Texas is what is remarkable for this event (5+ consecutive days). Lastly, the cold snap was well predicted over a week in advance and was driven by a stratospheric sudden warming event, which displaces the jet stream plunging Arctic air to lower latitudes. There are some studies that suggest the frequency of such events may occur with increasing frequency.  To mitigate risk, DNV recommends leveraging: 1) intra-seasonal forecasts to alert for potentially extreme cases 2) leveraging DNV’s energy variability assessments that can better capture rare events, such as the current cold conditions over the Southern Plains and 3) understanding the benefits of additional geographic and resource diversification.