On 8 March, we celebrate International Women’s Day, an initiative which marks the social, economic, cultural, and political achievements of women in a bid to accelerate gender equality around the world 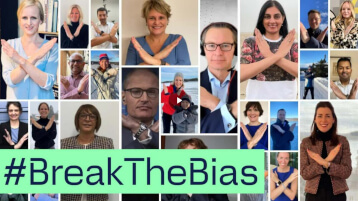 These statistics are harrowing, but the chances are they probably don’t have a direct impact on your life. For many of us, gender inequality seems like a distant problem. But gender bias is more pervasive than we might think. For example, women are 47% more likely to suffer severe injuries in a car crash because safety features are engineered for men. A woman is also 50% more likely than a man to receive the wrong initial diagnosis for a heart attack, based on years of the ‘male as the default’ in medical textbooks. If we look at the world of work, 113 countries do not have laws to ensure equal pay for equal work for men and women and in UK FTSE 100, there are more CEOs named Peter than women in the top job – in the US this is known as “the John problem.”

But gender inequality isn’t just an issue on a macro level or confined to the workplace. It starts in infancy with the stereotyping of boys and girls. By the time they reach adulthood, most women live in a world scattered with micro biases. And this bias is hidden and pervasive and ingrained, regardless of whether you yourself are male or female. In fact, a UN ‘Gender Social Norms’ index found that 86% of women hold some sort of bias against fellow females.

According to the World Economic Forum, sadly none of us will see gender parity in our lifetimes and with gender equality over a generation away women will continue to face barriers to opportunities in the world and in the workplace. And not even the barriers are necessarily always equal. It’s important to acknowledge that women’s experiences are not homogenous, and biases are further amplified when you add sexuality, race, ethnicity, disability, and gender identity into the mix.

To mark this day, where we celebrate the social, economic, cultural and political achievements of women, we invited women within DNV to share a piece of advice they wish they could tell their younger selves. The themes that emerged were all focused on stepping out of your comfort zone, challenging yourself and not being afraid to fail: You can read what else they had to say here:

"Stay motivated, accept challenges and take risks while caring about the well-being of you and the people around you."
Juliane Gulich, Head of Department, Digital System Operation, Power Grids, Energy Systems at DNV

“There is no such thing as a man's job or a woman's job and as cliché as it may sound, there is nothing, absolutely nothing that you cannot achieve. [...] And remember, being fierce and kind are not mutually exclusive traits. You've got this."
Lourdes Gala Santos, Team Lead Onshore Due Diligence, UK&I Energy Systems at DNV

“It's ok to make mistakes along the way but learn from them. Be open to learning and trying things out of your comfort zone."
Reshmy Prasad, Engineer, Project Engineering, Energy Systems, DNV

In a world where women often start on the back foot, pushing yourself to fulfill your potential and then using your position to empower others is one of the best things you can do to #BreakTheBias.

So, what comes to mind when you think about bias towards women? And what can you do to close the gap between recognition and action?