Compared to other environmental phenomena, observed and projected changes in wave and wind climate are expected to have the largest impact on marine structure designs and operations. Climate change in terms of an increase in storm activity (intensity, duration and fetch) in some ocean regions, and changes to storm tracks, may lead to secondary effects such as an increased frequency of  extreme wave events (abnormal waves, also called rogue or freak waves).


Preliminary findings & recommendations
The ExWaCli project aims to understand the impact of climate change on wave conditions and to specify uncertainties associated with projections of such changes. The projected wave climate for the period 2071–2100 is compared with the historical 1971– 2000 wave climate.

The investigations show that wave climate changes are highly regional-dependent and that there are still large uncertainties associated with their projections. Changes in storm tracks have also been identified in the North Atlantic.

The project has proposed how uncertainties associated with climate change projections can be incorporated into the risk-based approach used in our current rules concepts. Further, it has demonstrated that an increase of the significant wave height beyond 0.5 m in the North Atlantic will have a large impact on the current design practice for e.g. tankers.

Longer ships would require a larger increase in the ship deck area than shorter ships. The steel weight of the deck in the midships region is to increase. If the significant wave height increases by 1.0 m, the deck area will need to increase by 9% for a VLCC (Very Large Crude Carrier) and by 5% for a Product Tanker in order to maintain the current safety level. Increasing the hull girder strength in a more optimal way without increasing the steel weight could also be considered. 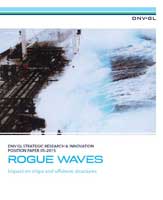