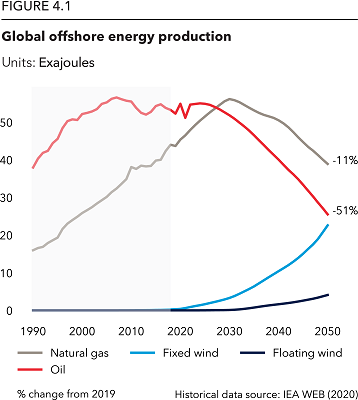 While offshore gas production grows before declining to around current levels, offshore oil production declines significantly both as global production reduces with decreasing use in transport and as production moves increasingly to cheaper onshore fields.

By 2050, offshore wind will provide about as much energy as offshore oil, but 31% less than offshore gas.

Offshore wind will supply 13% of electricity by then, indicating 14% average annual growth between 2019 and 2050.

The installed capacity of fixed offshore wind (1,800 GW) will be slightly higher than that of gas-fired power generation in mid-century, while at the same time producing 25% more electricity.