The signing of the documents on the partnership between DNV GL, the Russian National Committee of Cigré (RNC Cigré) and JSC R&D Center at Federal Grid Company of Unified Energy System (FGC UES), heralds a significant expansion of knowledge sharing and cooperation in the field of digital substations and equipment standardization IEC 61850.

PARIS, France - 23 August 2016 - DNV GL announces the protocol signing of a Memorandum of Understanding (MoU) between the R&D Сenter at Federal Grid Company of Unified Energy System (100% daughter company of FGC UES, ROSSETI group), Russia, and DNV GL, relating to work on testing, verification and certification of equipment in compliance with the IEC 61850 standard. The MoU forms part of an Agreement that also has been signed between the Russian National Committee of Cigré (RNC Cigré) and the Dutch/Belgium IEC61850 User Group, represented by DNV GL to hold a Conference on the subject of Digital Substations.

The growing automation of grids through digitalization relies on accurate and reliable data, while devices must also be interoperable and cyber secure.

Standardization plays a key role in meeting these needs. Thus, the IEC 61850 standard, now in its second edition, allows the integration of all the protection, control, measurement and monitoring functions in a single substation control system.

One of the main tasks of the Russian electricity sector is the use of standardized secondary equipment in accordance with IEC 61850 in the electrical networks. In order to solve this task, DNV GL and R&D Center at "FGC UES" have been collaborating since 2014 in the field of personnel training, testing and certification of products in compliance with IEC 61850.

"A real experience with DNV GL makes an invaluable contribution to the promotion of new technologies in the power industry of the Russian Federation", said Mr. Kosolapov, Director General, JSC R&D Center at "FGC UES". "The cooperation has allowed 7 enterprises in Russia to obtain certificates UCAiug 'Level A', confirming compliance with the IEC 61850 equipment, thus helping to gain access to the global market for Russian goods."

As a result of successful cooperation between JSC R&D Center at "FGC UES" and DNV GL on certification of equipment in compliance with the IEC 61850 for the application of "digital substations" technology in the companies in Russian Federation, the parties have signed a memorandum on exchange of information of using of new technologies, involving international experts, in the framework of an International Conference.

The agreement, including the organization of an International Conference in 2017 in R&D Center at FGC UES in Moscow, is another important milestone for the international community to IEC 61850. It provides an ideal platform for sharing knowledge and results as well as lessons learning from the negative experiences.

“It has been most rewarding experience to work together with R&D Center at "FGC UES" on IEC 61850 compliance and play a role in implementing of new technologies into the Russian Federation’s electric power industry,” said Maurice Adriaensen, Head of Department of DNV GL. “The signing of the MoU will also enable IEC 61850 knowledge sharing under the auspices of the Dutch/Belgium User Group, Russian National Committee of Cigré as well as other International Users and Standards organizations.” 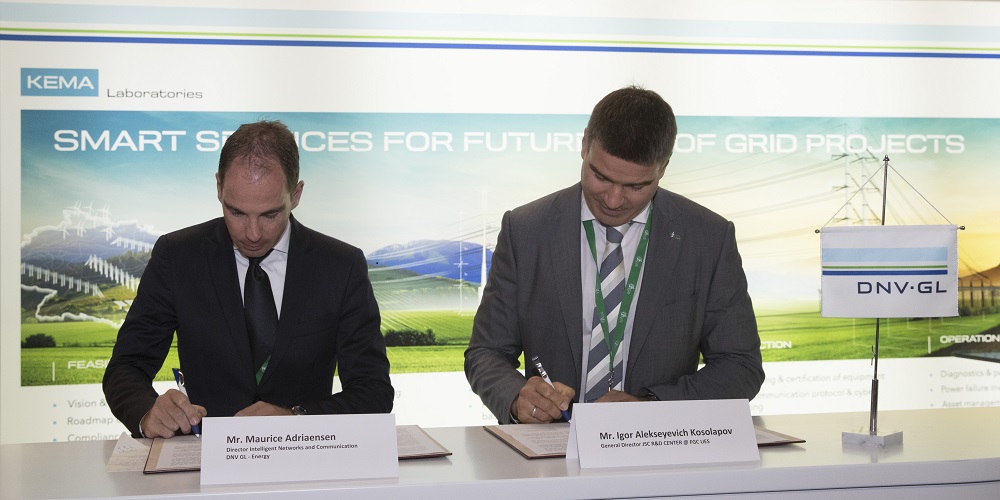 About DNV GL
Driven by our purpose of safeguarding life, property and the environment, DNV GL enables organizations to advance the safety and sustainability of their business. Operating in more than 100 countries, our professionals are dedicated to helping our customers in the maritime, oil & gas, energy and other industries to make the world safer, smarter and greener.

In the energy industry
DNV GL delivers world-renowned testing and advisory services to the energy value chain including renewables and energy efficiency. Our expertise spans onshore and offshore wind power, solar, conventional generation, transmission and distribution, smart grids, and sustainable energy use, as well as energy markets and regulations. Our 2,500 energy experts support clients around the globe in delivering a safe, reliable, efficient, and sustainable energy supply. www.dnvgl.com/energy