DNV GL’s client BG Group has been recognised by the gas industry for its achievements in sustainability. 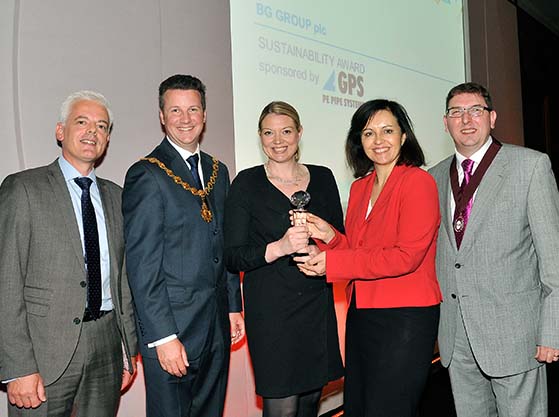 The EUA (Energy and Utilities Alliance) and IGEM (Institution of Gas Engineers and Managers) Gas Industry’s Sustainability Award 2014 was presented to BG Group at a prestigious event attended by over 600 gas professionals.

Held at the Hilton, Park Lane, London, the Gas Industry Awards is one of the largest events in the gas industry calendar, with the key note address this year given by The Rt Hon Caroline Flint MP, Shadow Secretary of State for Energy and Climate Change.

BG Group’s nomination for the award, submitted by DNV GL – Business Assurance, outlined how the company met its greenhouse gas emission reduction target that was set in 2007, aiming to deliver one million tonnes of sustainable annualised GHG emission reductions.

Over the life of the initiative, the company implemented more than 50 emission reduction projects in nine BG Group businesses. Approximately $20 million was spent on these projects, and the combined savings are now contributing $50 million annually to BG Group.

Of course, BG Group has set new GHG reduction targets. They are now working towards a new target to run until 2017 aiming to reduce their GHG emission intensity by 10%.

Jon Woodhead, Head of UK Sustainability, DNV GL – Business Assurance, comments, “We are delighted for our client BG Group who have achieved this award because of the commitment they have shown to meeting and exceeding their GHG targets. Their achievements are exceptional.”