CCS needs to start with a bang, not a whimper

DNV GL’s CCS Manager and holds a MSc in Mech Eng from Norwegian University of Science and Technology (NTNU), with a specialization in carbon capture technology. Author of several of DNV GL’s Recommended Practices for CCS and acts as a technical expert within both capture technologies and CO2 transport

For Carbon Capture and Storage (CCS) to make a meaningful contribution towards decarbonizing our energy system, it needs to start with a bang, not a whimper1. Scale projects are needed now if CCS is to stand any chance of benefiting from the cost-learning curve rates enjoyed by other rapidly-advancing elements of the low carbon economy, like renewables and storage.

It is not often a forecaster wishes to be proved wrong. At DNV GL, our Energy Transition Outlook (ETO) projection is that CCS will capture only 1.5% of emissions in 2050. That is another way of saying that CCS will not advance meaningfully without an extraordinary shift in commercial incentives. We are not in the business of forecasting the extraordinary.

As world leaders gather for COP24 in Katowice, Poland, they would do well to remember that almost every back-casting scenario of a 2-degree warming future (or better) includes a significant role for CCS – far higher than we forecast.

Principal researcher at DNV GL. MSc in Energy and Environmental management, and a PhD in Innovation and Entrepreneurship, both from the Norwegian Business School. Her current work focuses on the energy transition, climate change and associated shifts in investments, innovation strategies and policy measures.

What is going to take CCS to those heady heights?  Certainly not the path it has travelled in the last decade, which has witnessed a string of sub-optimal demonstration projects changing nothing about CCS except the urgency with which it is required.

The standard argument explaining the lack of progress in CCS is that it is expensive relative to cheaper and more easily-attained energy efficiency gains and/or a more extensive renewable generation buildout2.

Our own forecast of the energy future to 2050 shows a rapid transition to a renewables-dominated power sector, and to widespread electrification (of road transportation in particular), with attendant efficiency gains. And yet, under our forecast, the so-called 2-degree carbon budget is exhausted by 2037.

Other results from our forecast are instructive. For example, even if all electricity were to be generated by renewable sources from this day forward, the world would still fail to meet the ambitions of the COP21 Paris Agreement.

There is no silver bullet to a 2-degree-or-less future. We need to stop putting CO2 into the atmosphere, and for that we need to fire off at least three bullets at once: energy efficiency, renewables and CCS.

For as long as fossil energy is in the mix, CCS is needed to close the emissions gap. To achieve the Paris ambitions, postponing abatement is an expensive and high-risk option.

If CCS at scale remains an ever-disappearing horizon, the hydrocarbon industry is going to encounter increasing difficulties in justifying current, let alone future, levels of exploration and production.

One argument for immediate progress at scale is rather counterintuitive.  The energy system is decarbonizing: our Outlook projects energy-related emissions to stay virtually flat over the next decade, reaching their highest level in 2025, some 3% higher than today. Emissions will then decline steadily over the remainder of the period to mid-century, at which point they will have reduced by almost 50% to around 18 Gt CO2 per year. It need hardly be pointed out that the time to capture CO2 is not at the tail end of global emissions.

But a more cogent argument for starting CCS at scale now are the economics of cost-learning curves – the rate at which costs decline for every doubling of capacity (see Figure 1.). Current policies do not give CCS anything close to the push seen for other technologies such as wind, PV or EVs and batteries. 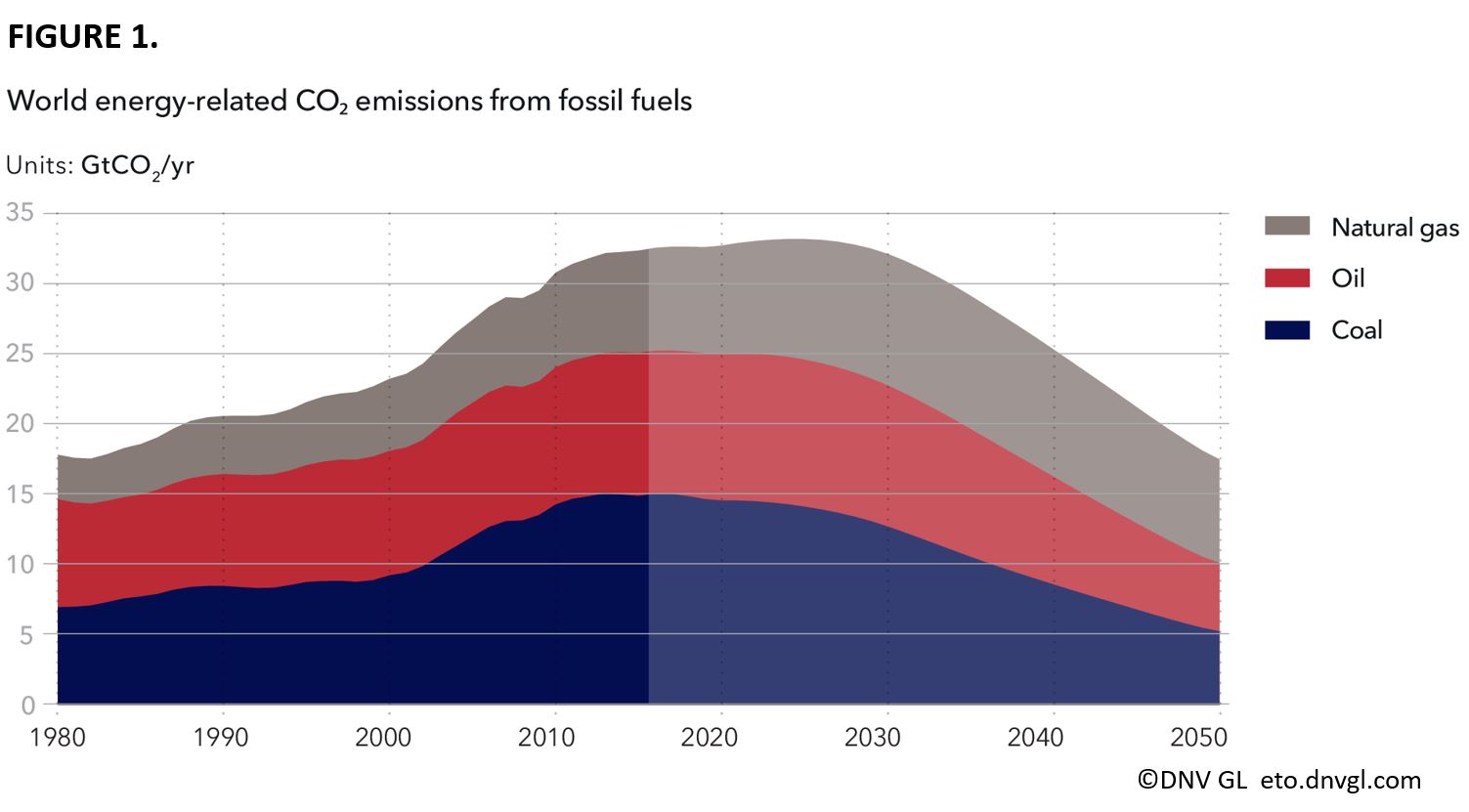 Why is CCS not happening?

Cost is the key barrier for CCS deployment. To date, the fitting or retrofitting of CCS to power plants and industrial sources has only occurred with government intervention. Enhanced oil recovery (EOR) has stood alone as the only viable business case.

The fact is that the non-abatement alternative is, and has always been, the cheaper option.

Most economists see carbon pricing as the most cost-effective way to incentivise emissions reductions. Yet, 85% of global emissions are presently unpriced, and the remaining 15% of emissions is mostly priced below US$ 10/tCO2, according to the World Bank’s State of Trends of Carbon Pricing 2018.

The needle isn’t expected to shift much on carbon prices – even with a growing number of carbon pricing initiatives, and with examples of higher carbon prices in places like the Nordic countries and France. Indeed, at DNV GL, our forecast sees carbon prices topping out in 2050 at just US$ 60/tCO2 in Europe and China, with prices elsewhere between US$ 25-50/tCO2.

Technology per se is not an inhibitor of CCS. The technology elements in the CCS value chain are regarded as reasonably mature, having first appeared in industry in the late 1970s.

CCS is needed wherever there are emissions – in both power generation and in industrial processes. The name of the game is to stop emitting CO2 to the atmosphere.

It can be argued that CCS in power generation can be replaced by an even stronger role for renewables. But as long as there are fossil fuels in the power mix, CCS is needed. As power systems are still predominantly national, the mandating of CCS would probably follow the polluter pays principle, facilitating a level playing field between different types of energy. Further, industries like cement, iron and steel, hydrogen and ammonia all have emissions where CO2 is created as part of the production process.

The cement industry represents around 5% of anthropogenic CO2 emission. In comparison, the world’s car fleet represents around 8%. In the production of cements, around 1/3 of the emission comes from the energy use, in many cases from coal, and we can assume that these can be replaced by alternative energy sources. The remaining emissions, for which we see no other option than CCS, comes from the reduction of limestone (CaCO3) to the intermediate cement product clinker (CaO) with associated release of CO2.

Similar arguments can be made for production of iron and steel, ammonia and aluminium.

But the technology has never been installed at the scale we are now witnessing for renewables and storage. When deployed, we expect it to experience a cost learning rate similar to those industries, with costs reducing 15-20% per doubling of capacity. Some justification for this is provided by the desulphurisation units rolled out on large power stations and other industrial emitters of SOx during the ‘80s and ‘90s; the capital costs of those units halved in under two decades.

So, the short answer to why CCS is not happening is that:

CCS does not currently make sense commercially, and effective policy measures to accelerate CCS pilots and projects are lacking. Consequently, there are too few projects to trigger the real-world experience, expertise and industrial efficiencies that result in cost reductions.

How big a bang?

If we add 60 full-scale new plants to the world’s capacity, we should be able to see cost reductions at around 30% of today’s level.

How many projects are needed to realize significant cost reductions?

The benefit of immature industries is that they tend to have a very steep cost learning curve to begin with – where most learning is gained per added capacity. If we add 60 full-scale new plants to the world’s capacity, we should be able to see cost reductions at around 30% of today’s level. This learning would apply globally, irrespective of location. On the other hand, clustering some of the projects would also allow for the development of sufficient regional transport and storage infrastructure to make additional projects that much more viable. 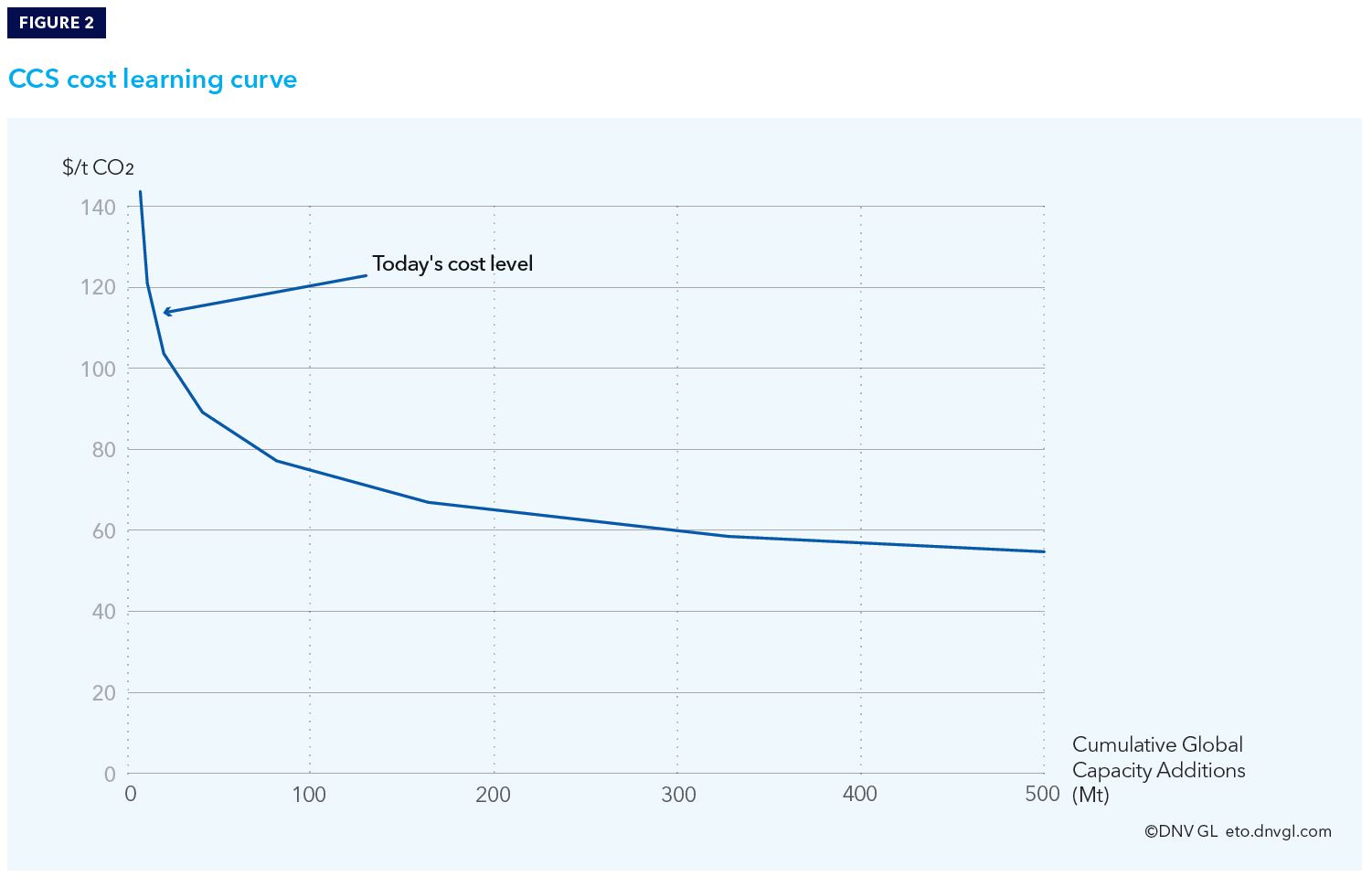 Without a ‘bang’ of this magnitude, enabling cost reductions and establishing the industrial symbiosis and necessary value chains, CCS technologies and their deployment will not happen by chance. The suite of technologies will simply remain a hypothetical element of 2-degree-or-less scenarios – and will be ignored by serious forecasters.

Worldwide collaboration and concerted innovation strategies should be pushed to scale up investment and deployment. Government-driven deployment policies (e.g., mandates, technology investment support, operational support as well as carbon pricing) are needed to meet the de-risking needs of projects.

Equally important are sector-driven initiatives for risk sharing and to prevent carbon leakage4.  Large oil and gas companies should see it in their own self-interest to finance fast deployment of CCS as part of sustaining the attractiveness of their products in a time of transition, and to meet investor priorities at a time when the pricing-in of climate risks is going mainstream.

Amid the global decarbonization agenda, private sector expertise and the financial resources of industrial ‘heavy-weights’ must be put in play in projects to deploy CCS. For CCS technologies to be realized globally, it is the near-term actions that count.