The remaining carbon budget for a 1.5ºC future is withering away. Already by 2029, DNV forecasts this budget will be exhausted. The energy transition must accelerate significantly to avoid the worst impacts of climate change.

Earlier this year, DNV presented the findings of its latest research report Financing the Energy Transition, a companion report to our Energy Transition Outlook for 2021. The report looks closer at how financiers, policy makers, and energy companies can enable the massive redirection of capital needed to transition faster to a deeply decarbonized energy system.

A Paris-compliant transition is affordable. DNV forecasts that the percentage of world gross domestic product (GDP) that will be spent on energy diminishes from 3.2% in 2019 to 1.6% in 2050 due to energy efficiencies and electrification. That is not because people will be doing less – in fact their lifestyles will be a lot more automated and connected in 30 years. They will just be using less energy to do so.

If the current fraction of GDP devoted to energy expenditures were to remain constant, the surplus funds to spend on clean energy would grow by around two trillion USD each year, reaching close to 63 trillion USD by 2050. This is clearly more than enough to finance a transition which is compliant with the Paris Agreement.

But reaching the 1.5ºC target will require an immense redirection of capital: to reduce energy demand, scale up clean energy, scale down fossil fuels, and to capture any remaining emissions.

A clean energy transition will happen. The question is whether the world will prioritize the investment needed to accelerate it. As shown consistently in our Energy Transition Outlooks these last five years: the world is indeed transitioning to a more sustainable way of living, as economies start to wean themselves off fossil fuels. Whereas 80% of the world’s energy was supplied by fossil fuels and 20% by non-fossil fuels in 2019, DNV predicts that the world will have an equal mix of fossil and non-fossil sources of primary energy supply by mid-century.

Governments and regulators play a vital role in this transition, driving change and enabling a fair marketplace. In countries like the UK and Denmark we have seen governments kickstarting industries by “overpaying” for electricity and now seemingly inefficient old wind turbines. In both cases, subsidies are now gone, and private investors have no problem stepping in to fund these projects. In contrast, coal projects are already a no-go investment for many, and the emissions intensity of oil and gas operations is becoming an increasingly significant factor in financial decisions. This shift is influenced by policy, but increasingly also by public and shareholder pressure, ESG requirements, and fear of stranded assets, as investors bring forward to today the future risk in fossil fuels.

Electricity demand will more than double by 2050, most notably in transport and buildings. By then, 70% of electricity will come from wind and solar PV, compared with 8% in 2019. This presents great opportunities but also significant challenges for the finance sector to play its role in funding many of these projects. This prospect will be increasingly compelling as advances in solar modules and wind turbine technology continue to lower the levelized cost of energy, making them the most economical source of generation – as is already the case in many regions. 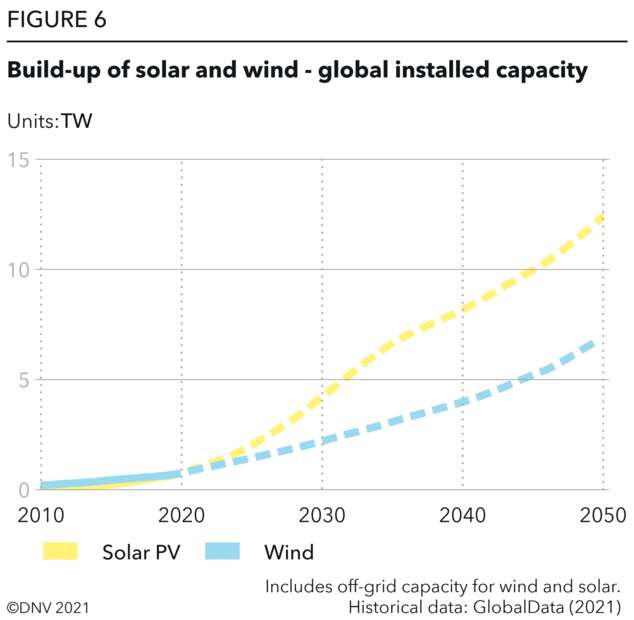 On the other hand, sectors that are high-emitting and hard-to-abate, will face different challenges. Potential solutions such as electrification and hydrogen for some manufacturing processes, plus hydrogen (and derived synthetic fuels) and biofuels for aviation, are at earlier stages in their development. These sectors are likely to require government intervention – incentive schemes, innovation funding, and mandates – to accelerate decarbonization.

The world cannot afford not to realize a Paris-compliant transition, in terms of the human and environmental impact, but also in the huge financial costs of climate change. The technologies that could deeply decarbonize world energy are well known and the transition is affordable long-term measured in relation to GDP. However, there will be massive short-term investments needed to reap this long-term affordability.   The challenge, therefore, lies in navigating how and when to implement these technologies, which are at different stages of maturity. The challenge also lies in managing how these technologies interact and rely on one another, and in reducing risk and increasing certainty to ensure much-needed capital flows. Governments must therefore deal with both long-term and short-term climate action and targets must be grounded with a credible baseline for emissions that can translate into action next year, and for each year following.