Dr Richard Gort: As a cross-border TSO that learns quickly we can help to accelerate the transition. For example, in our cross-border grid field operations, lessons from standardizing 380 kV and 220 kV grids in Germany are applied in the Netherlands. Work in the Netherlands with our supply chain is more integrated, cooperative, and performance and partnership-based, approaches we are transferring to Germany. For electricity, the transition should not only be about building new grids. It also needs to embrace systems thinking about how to integrate the grid into a green energy system, transport and store this electricity and convert power to hydrogen, using existing gas infrastructure.

To support Germany and the Netherlands’ decarbonization targets, TenneT has to connect an increasing output of North Sea offshore wind power and decentralized sources of energy into the existing grid and expand it for the future. We are piloting innovative blockchain solutions to see if interconnected home energy-storage systems or EV-loading stations contribute to grid stabilization. Innovation like this helps reduce investment needs for hardware in the grid. We must balance all these needs to support the transition; to stabilize an increasingly connected grid for security of supply; and, to do everything affordably at a reasonable cost to end users. One element of our strategy is to provide more electricity through existing grids by applying Dynamic Line Rating and advanced conductors, phase shifters, modern control technologies for grid stability, and possibly batteries boosting transport capacity to increase the use of the existing infrastructure.

We are replacing 50 to 60-yearold infrastructure, driving new thinking by standardizing installation in the field, and the project delivery train behind it. On digitalization, the key is to standardize data formats for digital interchange between TenneT and vendors. Another strategic thrust is to build the new grid with higher transmission capacity. Moving to 525 kV HVDC cabling technologies for our SüdLink and SüdOstLink projects in Germany involves much less cabling and footprint than 320 kV HVDC would. In a world first, we will use 525 kV HVDC cables with 2 GW converter platforms for five connections to offshore wind farms in the Netherlands and Germany. This standardization will reduce costs and the spatial impact of the cable systems. We are building on the experience gained with our first series of nine operational HVDC connections and three more under construction in Germany. We have also already used this experience to highly standardize a series of eight 700 MW AC offshore platforms for competitively connecting Dutch offshore wind farms by 2027 (of which two are currently operational), a key enabler towards subsidy-free offshore wind in the Netherlands.
Enabling flexibility takes international cooperation such as new cross-border power highways like BritNed, NorNed, NORD.LINK and COBRAcable. In the future, there may be a high-voltage ‘wind interconnector’ between the Netherlands and the UK, combining the offshore wind park connection with an interconnector function between both countries. We are also collaborating in the North Sea Wind Power Hub programme that could lead to a hub-and-spoke energy island offshore to connect countries and many offshore wind farms. We participate in the PROMOTioN project analysing positive effects of a joint offshore electricity infrastructure based on meshed HVDC grid technology, and in MIGRATE [Massive InteGRATion of power Electronic devices] for improving grid stability.

Our projects with vendors focus on new technologies to build the future grid and early planning so that facilities such as data centres can be near renewable energy sources. All this thinking and activity is about optimizing the energy system. Some sectors are hard to electrify. If they need green hydrogen, electrolysers will become part of the energy system. Hydrogen could be a cost-effective alternative to building even more electrical grid. We are exploring this with Dutch natural gas infrastructure and transportation company, Gasunie. The market does not always provide for innovation. For example, integrated hydrogen/electricity infrastructure may need seed capital.

Offshore wind is now almost subsidy free. Regulation sometimes hinders us when considering new technologies. For example, batteries can in certain cases be seen as a functional component of the grid rather than as “electricity generation”, which is not foreseen in the current regulation. Overall, though, I see signs of European governments pulling together to set directions and agree on stimulus packages, and am optimistic that Europe’s grids can meet the challenges of the energy transition and following COVID-19, the European Green Deal can help us to ‘build back better.’. 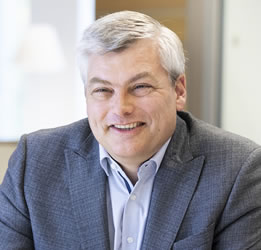 For electricity, the transition should not only be about building new grids. It also needs to embrace systems thinking about how to integrate the grid into a green energy system, transport and store this electricity and convert power to hydrogen, using existing gas infrastructure.
Dr Richard Gort,