One of the biggest differences for the offshore wind industry in the U.S. compared to European development in the North Sea are some of the physical conditions that offshore wind turbines will sustain.

One of the biggest differences for the offshore wind industry in the U.S. compared to European development in the North Sea are some of the physical conditions that offshore wind turbines will sustain. The North Sea has more challenging wind and wave conditions for normal day-to-day operations, while the U.S. projects will be subject to different extreme weather conditions, like hurricanes and Nor’easters. These differences are one of the reasons why it’s really important to evaluate historic and probabilistic extreme event conditions in addition to collecting on-site metocean data to have the most accurate picture of what conditions offshore wind turbines will experience during their lifetime. 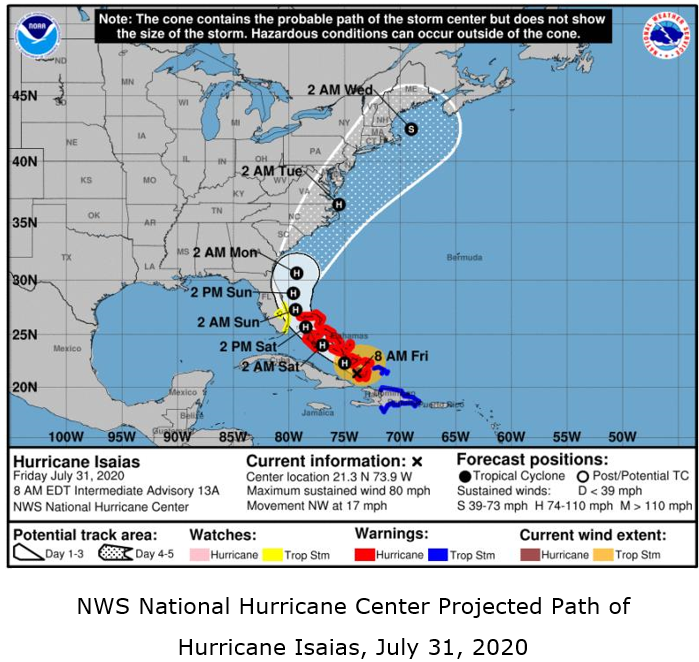 As of Friday, July 31, it looked like Hurricane Isaias was on a direct path over most of the Atlantic Coast offshore wind leases and call areas; however, as the storm progressed, its path veered toward land, eventually making landfall in North Carolina as a tropical storm, bringing heavy rain, flooding, and storm force winds along the east coast. While the center of the storm made its path overland, the impact of the storm could still be seen hundreds of miles away.

In September 2019, NYSERDA sponsored the deployment of two offshore wind floating lidar buoys in the New York Bight – one in the Hudson North and one in the Hudson South Call Area. Since then, the two EOLOS buoys have been collecting wind and metocean data which is published on a weekly basis, with statistical reports published on a monthly basis by DNV’s Resource Panorama service. While over 100 miles from the center of the storm, the two buoys felt the impact of the tropical storm. 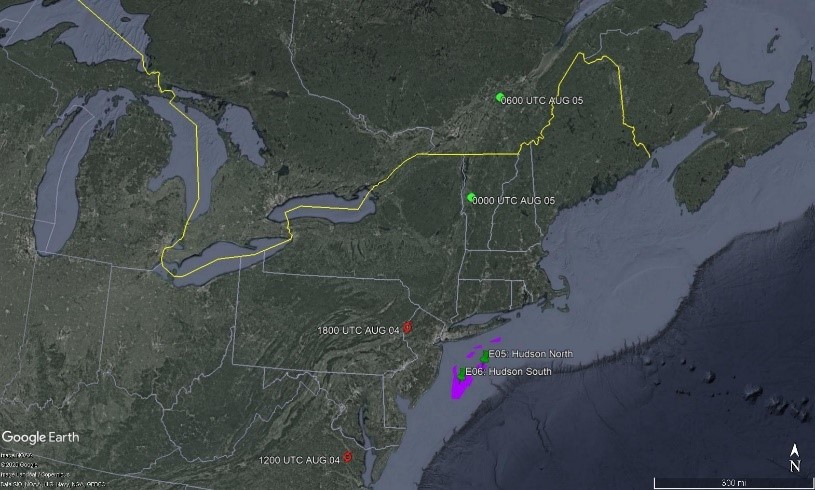 The buoy in the Husdon South Call Area, E06, was closest to storm track. The buoy has been deployed since September 2019, and over that time period, the wind the sea surface averaged 10.2 m/s (23 miles per hour). 140 m above the sea surface is the approximate hub height of the GE Haliade X offshore wind turbine. However, over the course of the 12 hours where Tropical Storm Isaias was closest to the NY Bight (August 4 at 12PM to August 5 at midnight), the average wind speed measured by the lidar was 22.3 m/s (50 miles per hour), with a maximum measured wind speed of 41.5 m/s (93 miles per hour). 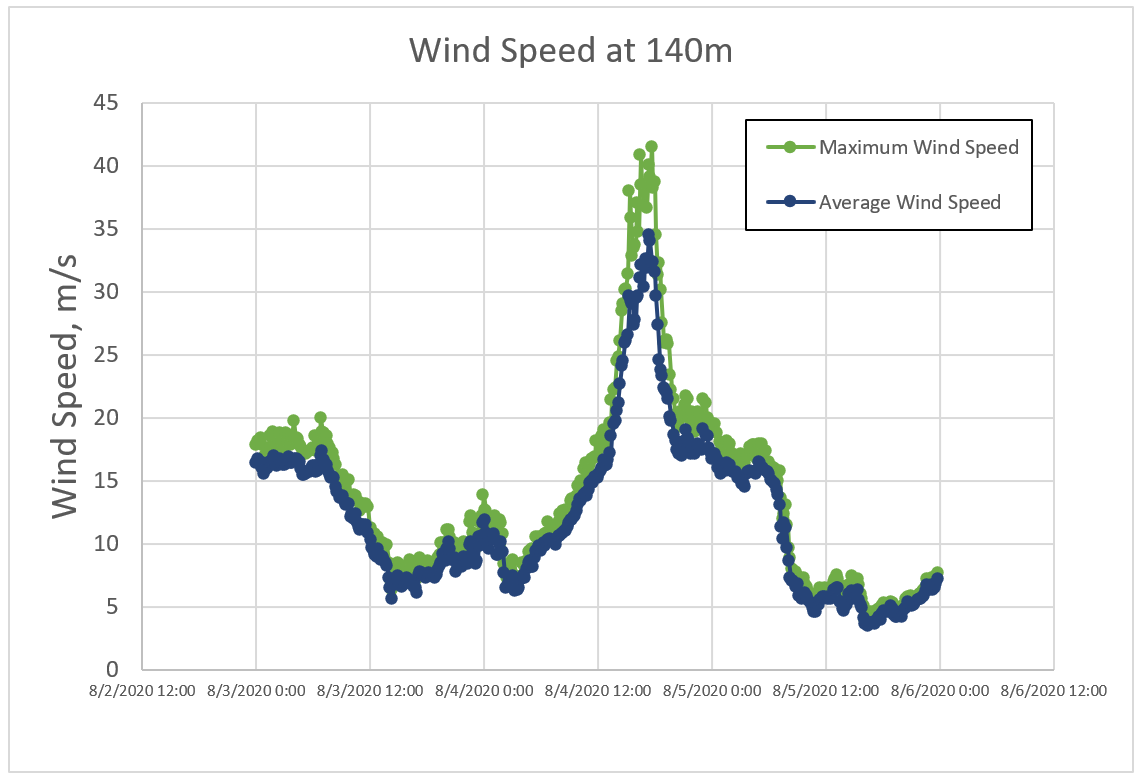 Through all of that, the buoys made it through the storm and are still operating as expected!

So, how would an offshore wind project fare in those conditions? Offshore Wind turbines are classed to survive 155 mile per hour (70 m/s) gusts for 3-seconds, which is nearly 70% higher that were captured by the buoys. Category 4 hurricanes have wind speeds between 120-156 miles per hour, and according to NOAA historical hurricane tracks there have not been any instances of Category 4 hurricanes as far north as the NY Bight. Also, with wind speeds that high, offshore wind turbines would cut-out of operation, namely they would feather the blades, lock the rotor, and not be spinning. For offshore wind, turbine cut-out typically occurs when wind speeds are greater than 25 m/s. Further, offshore wind turbine foundations are designed to standards that are similar to offshore oil and gas platforms and designed to withstand hurricane wind and wave loads.

The two buoys will remain deployed through 2021. While, of course, no one wants a hurricane, at least if there’s one that goes over the NY Bight in the 2020 or 2021 hurricane season, the offshore wind industry and researchers will benefit from the valuable data being collected and retrieved by the two buoys. If you’d like to learn more about longer term trends that we’ve seen at the NY Bight buoys, please check out the first blog in this series: Should the Trend of Larger Turbines Continue Offshore? An Analysis of the New York Bight Floating LIDAR.

Disclaimer: NYSERDA has not reviewed the information contained herein, and the opinions expressed in this report do not necessarily reflect those of NYSERDA or the State of New York.