A semisubmersible is designed to operate in harsh environments in operational and temporary conditions. In this context, it becomes essential to understand how different accelerations impact the integrity of the structure.

For example, floating structures can be submitted to different sea state conditions during towing operations, which will impact on the acceleration response of the unit. The effect of these accelerations on the integrity of a platform structure is extremely important and it will be taken in account by means of a motion analysis.

One of the most challenging steps in a towing operation analysis of a semisubmersible is to determine which sea state must be considered. In order to overcome this challenge, a number of different sea states have been analysed in this study in order to verify whether they meet the criteria of maximum accelerations for a specific floating unit.

With this information, it was possible to create an abacus of allowable wave heights as a function of the wave period, when the criteria of maximum accelerations are known. From these criteria, for different drafts and unit headings, it was possible to obtain the maximum significant wave heights so that the accelerations will not be higher than the established criteria.

There are mainly two scenarios where the abacus could be used:

Through the abacus’ technique, it is possible to establish the best route taking into account the wave characteristics of each sea state. An example of the abacus is shown below: 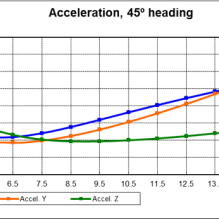 The next step would be to perform the motion response analysis in HydroD which is an interactive application for computation of hydrostatics and stability, wave loads and motion response for ships and offshore structures. The wave loads and motions are computed by Wadam or Wasim in the Sesam suite of programs. Wadam uses Morison’s equation and first and second order 3D potential theory for the wave load calculations and a small forward speed (from version 9.2). So unless the forward speed is significant, Wadam can be used. Otherwise, if large forward speed shall be used, Wasim is the solver to be selected. Wasim is a program for computing global responses and local loading on vessels moving at any forward speed as long as the vessel is not planning. The simulations are carried out in time domain, but results are also transformed to frequency domain by using Fourier transform. 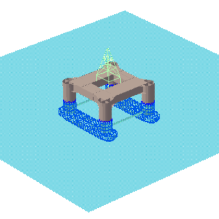 If a structural assessment is also of interest, a load transfer of hydrostatic loads can also be performed in HydroD and a further structural linear analysis using Sestra, which is the structural solver.

As you can see, the entire Sesam suite provides valuable insights during design and operational stage. If you would like to have further information about Sesam and its capabilities, please contact one of our local offices and we will be happy to help you.

If you need more information on the technique developed to design the abacus, please refer to the paper.