A domino effect is a hazardous event on one facility or installation causing failure of equipment on neighbouring facilities or installations leading to additional hazardous materials being released. A jet fire from facility A impinging on a pressure vessel located on facility B resulting in rupture of the vessel and release of hazardous material is an example of a domino effect. It can be described as a type of escalation.

In order to protect workers and members of the public, it is necessary for owners and operators of hazardous facilities to understand the potential domino effects that could occur on their site and those they could inflict on their neighbours. A mechanism for understanding the potential domino effects is to perform consequence and risk modelling. DNV’s Phast and Safeti software can be used for this purpose.

An assessment of domino effects can be performed in seven steps:

Simplified example of a domino assessment

By way of example, we can consider pool fires originating from an oil storage facility and the potential domino effects to an LNG tank on a neighboring facility. 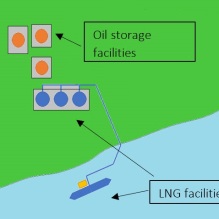 An understanding of domino risks requires the process to be repeated for all sensitive receptors and hazardous events. It will allow owners and operators to make comparisons with other facilities and to rank the sensitive receptors so that risk reduction can be prioritised.

Phast can be used for parts 3 and 5 of the methodology described above. For the other parts, including determining likelihood of scenarios, it is a manual exercise performed by the analyst outside of the Phast software. In Safeti with the 3D explosion licence, however, the process is much simpler. Once the user has created and defined data for the models (possibly as part of a Quantified Risk Assessment (QRA)), the software can generate exceedance frequency plots for the chosen domino effect thresholds. In other words, analysts can use the plots to very quickly determine the likelihood of sensitive receptors being exposed to domino effects. 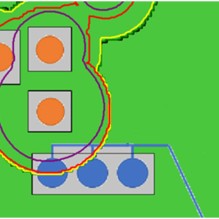 The modelling of consequences within Phast and Safeti can also be made time dependent. In other words, we can visualise consequences and calculate risks with time-varying discharge rates accounted for in the modelling, providing a more advanced domino assessment where required.

Whether the assessment is performed in Phast or Safeti, a methodology has been outlined here that will allow owners and operators to determine their domino risks and to allow cost effective risk reduction.

Finally, it should be noted that examples are provided in this post. Owners and operators of sites should determine the hazardous effects and thresholds relevant for their operations. IOGP Report 434-15 is a useful reference, available here.