Traditional uses versus new proposed uses of the ocean — it’s not a new conundrum, but it’s taken on new meaning lately for the waters off the U.S. Atlantic Coast. With over 20 GW of offshore wind expected to be installed on the Atlantic Coast between now and 2035, a new balance needs to be navigated.

For years, state Task Forces under the leadership of the Bureau of Ocean Energy Management (BOEM) have gathered stakeholder input concerning which offshore blocks and aliquots should be made available as leases for potential offshore wind development. Given this long process of stakeholder engagement, one might assume that any identified lease area that reaches the auction block has been deconflicted to the point that there are no red flags to be concerned about – namely, there is confidence that the entire lease area is suitable for development. To a large degree, that’s true. Interests such as recreational and commercial fishing, endangered marine mammals, and many others are accounted for in the winnowing process; however, maritime risk is a complex issue that has yet to be resolved.

Tug and tow transportation is critically important to U.S. commerce. Nearly 84% of U.S. domestic water-borne tonnage is transported via barge (PWC: Economic Contribution of the U.S. Tugboat, Towboat, and Barge Industry 10 May 2017). As you can see in Figure 1, the bright red line shows that there’s a lot of towed barge traffic to the west of the New Jersey leased areas. In addition, there are plenty of orange and grey lines indicating less dense but still significant traffic through the leased areas. These vessel captains choose routes that are close to shore as that’s where their vessels are best suited to operate. 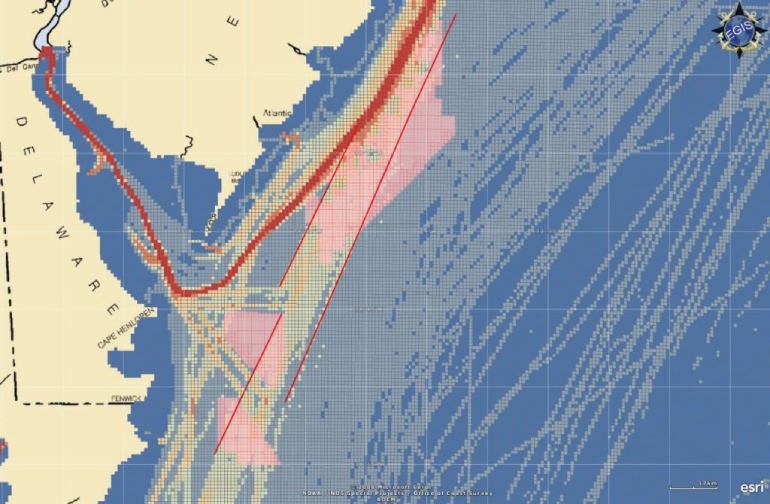 In this area, the tow line between the tug and the barge can be up to 2700 – 3000 feet long (Figure 2); as a result, most tug and tow captains will choose to route around offshore wind farms when they are built.

The U.S. Coast Guard (Coast Guard) has not made specific traffic lanes for tug and tow routes; however, they do recognize that they have traditional routes based on the historic traffic. The red lines in Figure 2 indicate one of the traditional routes for tug and tow vessels along the coast, which was presented by the Coast Guard in 2012 at a New Jersey Task Force meeting. Based on those lines, you may think there is plenty of ocean space east of the lease area, and the tugs could just shift their traditional route to go around the lease area and turbines.  However, deeper waters and higher winds offshore are not ideal from an operational and safety perspective for these tug and tow vessels, so rerouting the traffic to the east isn’t a great solution.

So what if the tugs that normally go through the lease area joined the tug traffic already transiting on the west side of the lease area? The Coast Guard proposed a tug and tow route to the west side of the New Jersey lease area, as shown in Figure 3, with the green lines showing the traffic lane. The coast guard recommends that a tug and tow traffic lane be 9 nautical miles (NM) wide (indicated by the green lines), with  a 2 NM corridor on either side (indicated by the red lines) to allow room for passing and management of situations, somewhat like a shoulder lane on a road. These recommendations about lane width and corridor have not been codified, and developers have found themselves at odds with the Coast Guard when the proposed wind farm layouts do not maintain these suggested buffers. 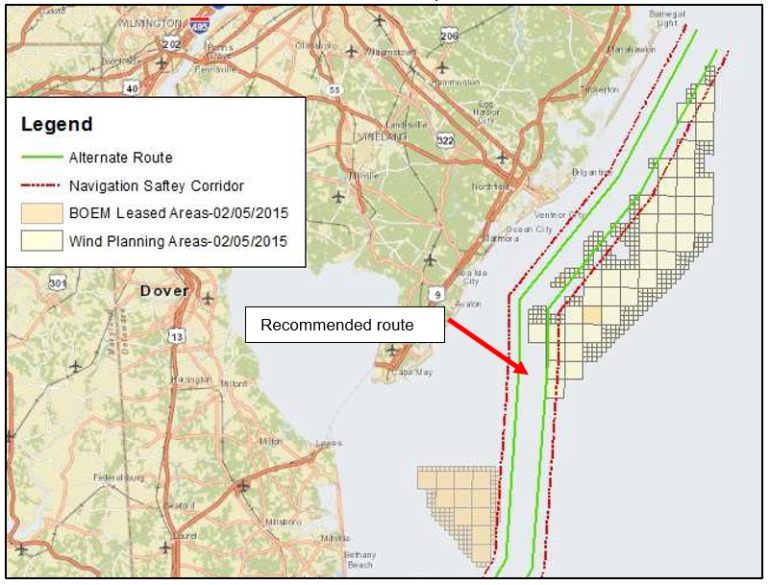 With this delineated traffic route, the Coast Guard recommends that offshore wind shouldn’t be developed between the red lines. While there is still a lot of the lease area remaining in the wind areas directly off New Jersey, this is not the case for all lease areas. It’s not perfect, and there are still conflicts that need to be resolved in order to strike a balance between renewable energy development off the Atlantic Coast and having a safe coastwise transportation system.

While BOEM has yet to release the final NY Bight and California wind energy areas, developers that are considering bidding for these lease areas should take care that they consider maritime uses and traffic in and around their lease so that they are not caught in an unexpected situation. There’s nothing worse than spending hundreds of millions of dollars and then finding out that certain portions of the lease area are going to cause significant issues with the Coast Guard. Let us know if we can help you by evaluating the maritime risks of the proposed lease areas to help de-risk your major investment decision.

Learn more about our offshore wind expertise and services.