On 8 March, we celebrate International Women’s Day, an initiative which marks the social, economic, cultural, and political achievements of women in a bid to accelerate gender equality around the world

Every year on 8 March we celebrate International Women’s Day, an initiative which marks the social, economic, cultural, and political achievements of women in a bid to accelerate gender equality around the world.

This year’s theme is #ChooseToChallenge – an opportunity for people to stand up and call out gender bias and inequality, no matter who they are or where they are from. In this blog we speak to Lucy Craig, Director of Growth Innovation & Digital, Elizabeth Kaiga, Key Account Director for Renewable Energy, and Kim Rolfsen, People Director, from DNV’s Energy Systems business unit to hear their thoughts on how we must work together to ensure true, lasting change within the energy industry.

Progress is happening, but there’s still more left to do

At DNV, we’re encouraged to see that much positive progress has been made towards gender equality in the energy sector in the last decade. While there has been a steady increase in the number of women taking up leadership positions within the industry, it’s also more widely recognized that gender equality is having a positive business impact.

“We believe that diversity and inclusion is a driver for business performance” says Kim. This is reinforced by a McKinsey study which found that businesses in the top quartile for gender diversity on executive teams were 25% more likely to have above-average profitability than companies in the fourth quartile.

During her 20-year career, Elizabeth has also witnessed a transformation in the conversations being had by businesses about equality. “We’re seeing a huge increase in awareness when it comes to diversity, equity and inclusion – including the representation of women within the workforce. For me, this shift provides hope for the path forward.”

Despite improvements being made, however, the sector still has some way to go if it’s going to achieve true gender balance. Research from the International Renewable Energy Agency (IRENA) in 2019 found that women’s participation in energy is still below that of the broader economy and varies drastically across the different sub sectors. Despite making up 48% of the global labour force, women account for just 22% of the labour force in the oil and gas sector and 32% in renewables.

Why? Lucy believes – amongst other things – a wider cultural change is still needed. “You see that in countries where there is greater flexibility, for example with maternity and paternity leave or better working hours, there tends to be a greater number of women in senior positions. Enabling a good work-life balance for those who also need to consider family life can make it a lot easier for women to see a place for themselves within an organization.”

“At DNV we know that this is something that has to be built into our business at every level, from our leadership team through to our recruitment, mentoring and workplace policies”, adds Kim.

Enabling a better future for all

While Lucy was completing her engineering degree at University, the ratio of women to men was 1 in 5. In her opinion – to make a real difference – we must remove the cultural and educational bias surrounding technical subjects. “There is still a fundamental issue with girls not choosing STEM subjects at university. It’s important that this changes so that younger generations can see role models at every level within the industry, and especially in technical positions and senior management.”

Empowering other women within the industry is also an important factor in removing future barriers. Both Lucy and Elizabeth are involved in multiple industry wide initiatives, Lucy as a mentor to younger women as part of ‘The Women in Wind Global Leadership Program’ run by the Global Wind Energy Council (GWEC), while Elizabeth is a member of the board of Women of Renewable Industries and Sustainable Energy (WRISE) - a non-profit seeking to change the future of energy through the actions of women.

To uplift others, we must acknowledge that the challenges faced will vary from country to country, and business to business.

“It’s not about solving the same problem equally. We must appreciate that, as women, we’re not all having the same experience. As a woman of colour, I think it’s important for us to recognize that, as soon as we introduce other intersectionalities, barriers increase and the road to equality becomes a lot more challenging. Although gender bias is an important issue – we need to address all areas of inequality for the industry to really evolve” says Elizabeth.

DNV is ready to listen

At DNV we believe that everyone should be involved in creating an environment where we can all thrive. “Our goal is to be inclusive and by that we mean listening to all voices. We strive to be part of an industry where our people can maximize their talent and impact, and not be held back based on gender or any other aspects that make up their identity”, adds Kim.

For us Choose to Challenge means that we should be ready to listen and dare to be challenged with an open mindset. 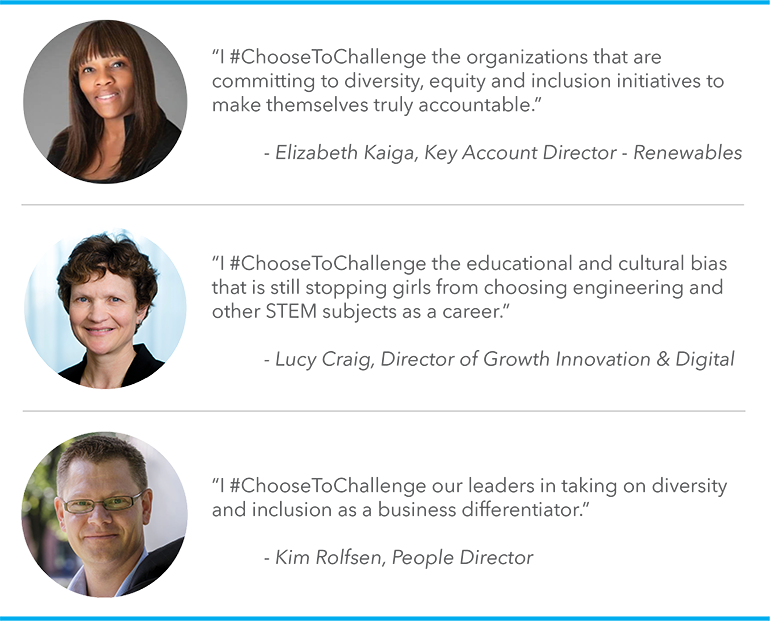