The challenge is decoding what is reality and what is just a lofty goal. 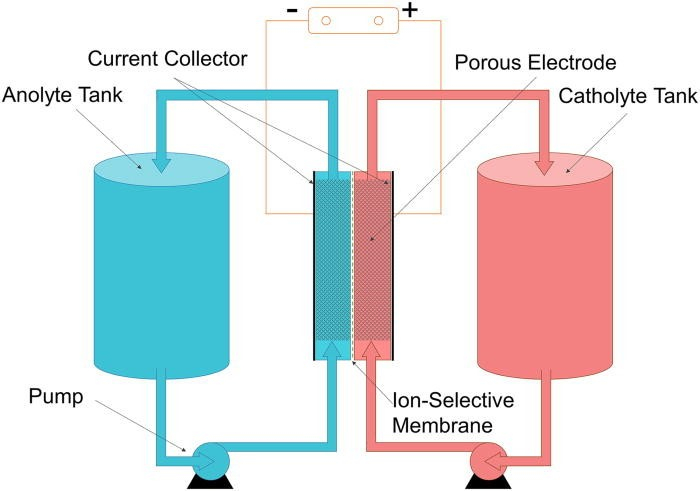 If you’re reading this post, you probably have heard about flow batteries. You also probably have heard some of the claims about flow batteries having lower degradation, improved safety, and longer-duration capability compared to their Li‑ion counterparts. With a range of electrolyte chemistries and stack designs, each flow battery manufacturer strives to exploit these potential advantages while competing with Li-ion’s higher power density. The challenge is decoding what is reality and what is just a lofty goal. At DNV, we have worked with many different flow battery manufacturers and understand the different designs, chemistries, and integration strategies and how they compare with other battery types. Read on for an overview of the technology as it stands today, and how flow batteries’ key differentiators may help or hinder wider-spread adoption in the expanding energy storage market.

Flow Battery Overview
A flow battery is an electrochemical conversion device that exploits energy differences in the oxidation states of certain elements (often metals) to store or discharge energy. They are divided into three categories: redox flow batteries, the most common; hybrid flow batteries; and membrane-less flow batteries. Flow batteries get their name from their liquid electrolyte which ‘flows’ through the battery system, with each category utilizing a different mechanism. A redox flow battery uses a liquid phase reduction-oxidation reaction, hybrid flow batteries have a liquid-solid transition, and membrane-less flow batteries require no electrolyte separation, and are a very new technology. Like Li-ion batteries, within and between each category, flow batteries have different chemistries, including the most commonly used vanadium, and less frequently used zinc-bromine, polysulfide-bromine, iron-chromium, and iron-iron.

Ok, so you are probably wondering two things: am I going to need a periodic table to finish this post, and why does this all matter?
This matters because, unlike Li-ion batteries, flow batteries have liquid electrolyte stored in external tanks rather than in each battery cell (see figure). Since the energy-carrying electrolyte is physically separate from the power-producing stacks, much like an automobile with an internal combustion engine and a separate fuel tank, flow batteries have their energy and power decoupled. If you want a longer duration battery, buy a bigger gas tank, not a bigger gas tank and a bigger engine, which is required in Li-ion batteries.

Unlike an automobile with its engine, however, a flow battery can recharge the electrolyte after discharge (have you ever seen an engine run in reverse to produce gasoline and air?). And unlike Li‑ion batteries, the electrolyte gets charged and discharged by flowing through all the cells and stacks at the same time, so there is one common state of charge (SoC) rather than many individual SoC’s for each individual cell. This, in turn, means that cell and stack balancing is not required.

So, do all these differences lead to lower degradation, improved safety, and longer-duration capability compared to Li‑ion batteries? Well, you know what they say, the devil is in the details and the proof is in the pudding.

The Devil and the Pudding
First, let’s dive into the details behind the claims that flow batteries have lower degradation, improved safety, and are better for long-duration applications. Then we will see if there is proof to support these claims. The following list highlights claims about flow battery advantages and disadvantages compared to Li-ion systems and if each has a significant impact (or supporting data) to substantiate.

Flow batteries can increase their energy output (kWh) without increasing their power output (kW), which cannot be done in Li-ion batteries and saves significant cost on long-duration (i.e. multi-hour) applications.

Flow batteries have a lower fire risk than Li-ion batteries.

Flow batteries are safer to service than Li-ion batteries.

Flow batteries have simpler monitoring and controls and less degradation than Li-ion batteries because no cell-to-cell or stack-to-stack balancing is required.

Flow batteries have more accurate measurement of SoC, allowing for wider operating range of the battery and less degradation than Li-ion batteries.

Flow batteries have a complex balance of plant that requires pumps, plumbing, and electrolyte tanks for electrolyte management, which add capital costs and operation and maintenance requirements.

Flow battery system mass is relatively high, which means they are more attractive for stationary applications, where Li-ion systems are more versatile.

Flow batteries are far behind Li-ion batteries in market penetration and diversity of markets.

As an added consideration and touched upon above, not all flow battery technology is equal. Vanadium-based technology is the most mature, with the first commercial system installed in the mid-1990’s. Many other technologies have far less development and almost no field data to speak of. Differences in design and electrolyte chemistry also may affect performance. Redox flow batteries (like vanadium and polysulfide bromide), which all have chemical reactions within the liquid phase, may prove to have advantage over hybrid flow batteries (e.g. zinc-bromine, zinc-cerium, zinc-iron, iron-iron), which have a liquid-solid electrochemical reaction prone to additional degradation due to dendrite formation and increased resistance. Also, certain chemistries require electrolyte conditioning, a process of balancing the electrolyte chemistry using additional hardware or maintenance steps, which is required daily in many flow battery systems. Also, certain flow battery manufacturers have focused heavily on design for manufacturability, minimizing install time, reducing O&M, and integrating with renewable resources like wind and solar, which may give them a cost advantage upfront and over the life of the system.

Conclusion
As you can see, there is lots to consider and it is not straight forward. To circle back to our original questions, do flow batteries have lower degradation than Li-ion batteries? It appears that in some cases, yes, they do, so long as they are designed and operated in a way that minimizes other contributors to degradation (but many more years of data is needed to prove this definitively). Are they safer? This also seems to be true, since a catastrophic flow battery failure would not likely cause a dangerous fire with the associated toxic gases that are seen in Li-ion failures, but DNV has never tested this. However, managing all the liquid electrolyte is much more difficult in flow batteries and if not contained properly will leak, which is not common in Li-ion systems. Finally, are flow batteries better for long-duration applications (>6 h)? The answer there is still up for debate. Li-ion systems can run for longer durations by adding more batteries (with the added benefit of more power, if desired), so it comes down to a cost comparison, and only time will tell if flow batteries will be able to keep up with the quickly falling costs seen in Li-ion batteries.

As a final consideration, many players in the flow battery industry have recently stumbled, including Imergy, Aquion, and ViZn, and it is likely that only a few will be able to capitalize on the potential advantages of flow batteries. Whether it is reviewing performance history, design details, company leadership, or financials, DNV is well positioned to help identify risks and navigate design considerations to make the best-informed decision about this nascent technology.