In modern ship design, electric propulsion and large consumers with continuous operation are common, increasing the risk of cables overheating. For example, when too many cables are bunched together without air circulation for cooling. This news provides a way to correctly calculate the amplicity.

DNV Rules for classification, Part 4, Chapter 8 and the offshore standard DNV-OS-D201 set the requirements for the determination of cable current-carrying capacity (ampacity) on DNV-classed vessels. Electrical rules contain tables for ampacities together with derating factors collected from IEC 60092-352 (2005). The standard describes two alternative ampacity calculations in Annex B and Annex A.

Ampacity tables in the DNV Rules are based on Annex B. Initially established in 1958 and based on limited experimental data, IEC 60092-352 Annex B gives tabulated ampacities for general installations. It consists of one table, whereby the designer selects the size of cable conductor and whether it is a single-core, two-core or multi-core cable. Up to six cables can be bunched together without derating. More than six cables grouped together require a de-rating factor of 0.85. Annex B is popular because it is simple to use. In many situations, this method for general installations gives acceptable results. As described in Annex B, the tables give only average values for the current ratings; these are not exactly applicable to all cable constructions and all installation conditions existing in practice.

Overharmonic currents: High levels of Total Harmonic Distortion (THD) can create additional heat losses which are not included in Annexes A and B. Due to the high frequencies of harmonics, the skin effect can further decrease the effective cable conductor area. Both issues necessitate increased cable conductor dimensions to avoid overheating of cables.

Maximum two layers: Power cables under full continuous load should not be installed in more than two layers. This would prevent air circulation around the enclosed cables inside the bunch and make it impossible to evaluate cable temperatures during sea trials. An exemption is six multi-core cables installed in trefoil with two cable outer dimensions (ODs) between bunches.

Comparison between Annex A and Annex B

Please be aware of cases where the average calculations of Annex B allow for higher ampacities than Annex A, which may lead to a higher risk of cables overheating. To reduce this risk, a detailed comparison is provided for various installation methods. 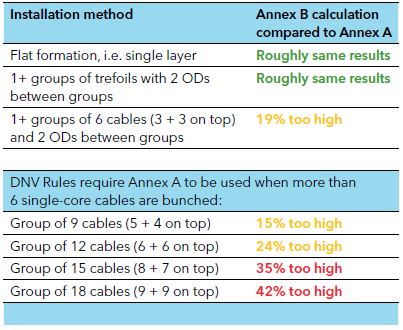 Table 1: Comparison of results based on Annex A and Annex B calculations for single-core cables. Values are average for cross-sections 25mm2 to 630mm2. 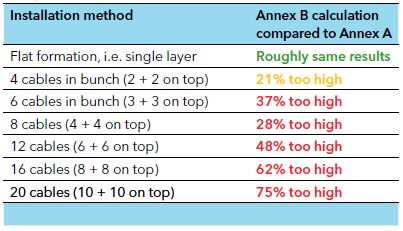 Table 2: Comparison between Annex A and Annex B for multi-core cables. Values are average for cross-sections 25mm2 to 630mm2. Special care must be taken to avoid overheating if multi-core cables are calculated using Annex B. But cables expected to be under full continuous load simultaneously must be calculated according to Annex A to avoid the “red items” above.

Annex A shall be used if bunched power cables are expected to be under continuous full load simultaneously. Annex A shall also be used when more than six single-core cables are bunched without spacing for air circulation around each cable. It is more economic to split large cable bunches into smaller bunches surrounded by air to avoid any unnecessary derating of expensive cables. A guidance for the verification of cable temperatures during sea trials is included in the appendix.