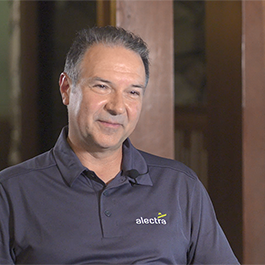 Cascade gets high marks from customers

Some of our valued customers have shared with us how they are using Cascade, the energy utility asset management software, and what they are gaining, including major cost-savings.

Vince Polsoni, (former) Manager, Station Sustainment, at Alectra Utilities in Ontario focuses on major issues in the industry today: ageing staff and ageing infrastructure. His company was looking to maintain more assets with less resources. “The way to do that was to maintain the equipment the right way at the right time,” he says.

“When we implemented Cascade, we established a whole new framework on installing sensors and making that information available to Cascade by using the Cascade Connect application,” says Polsoni, referring to the Cascade Algorithm Rules Engine. Alectra used that data to drive condition-based maintenance.

There have been major improvements based on the Cascade implementation at Alectra, and the results have been a significant shift in lowered costs. “Situational awareness is a big gain for us,” says Polsoni. “All of our field staff and asset management staff have a good understanding of the condition of our assets. We have implemented a criticality, health and risk model.” Alectra uses that information to prioritize maintenance work, something that was not previously done. In addition, the company collects all equipment failure information in Cascade. Using Cascade, they generate reports that give information on failures to auditors and insurance companies.

All this translates into tangible benefits for the end customers: improved reliability and increased uptime of assets.

“We use Cascade for the maintenance that we do on equipment out in the field, as well as the inspections,” says Janis Harmon, Technical Advisor at Idaho Power Company, which serves more than 550,000 customers in Idaho and eastern Oregon. “Those are time-based as well as trigger-based inspections,” she says. “We’ve added more equipment to our fleet and added more work procedures. We still manage the workload.”

With Cascade, it is possible to do analyses of the data that wasn’t previously feasible. “As someone would retire from this company we would bring someone else on,” says Harmon. “But in order to be able to justify that we would have to narrow it down to actual man-hours and show on our procedures in Cascade that it justified having that person there. By implementing the timekeeping features in Cascade, we were able to do that,” she says.

“Cascade meets all our needs for the compliance evidence reporting and forecasting. It probably has 15 years of data in it,” says Kelly Miller, Supervisor Substation Support Services, at the Salt River Project in Arizona.

Due to the closing of a coal plant in the company, approximately 300 employees are in a process of becoming displaced. “Using the forecasting mechanism of Cascade, we are able to show upper management the amount of work we have in the upcoming years, so we can take the employees who are being displaced, bring them down to the valley and give them jobs,” she says.

“Currently we’re using Cascade for all our substation assets,” says Pano Harpolis, Manager Operations Services at Central Hudson Gas & Electric. That includes everything from nameplate data to capturing scheduled maintenance or ‘trouble orders’. They test, do diagnostics, review the data and make modifications to maintenance and capital spending plans.

Alectra Utilities is the largest municipally-owned electricity utility in Canada, by number of customers. It is the second largest utility corporation in North America, serving several municipalities in the Golden Horseshoe region of Ontario, with nearly one million customers from Penetanguishene to Niagara.

The Idaho Power Company is an electric utility engaged in the generation, transmission, distribution, sale and purchase of electric energy, serving more than 550,000 customers in Idaho and eastern Oregon.

The Salt River Project is a community-based non-profit utility and the largest provider of electricity in the Greater Phoenix metropolitan area, serving about 990,000 customers. SRP is also the largest provider of water to the greater Phoenix metropolitan area, delivering about 800,000 acre-feet annually to agricultural, urban and municipal water users.

Central Hudson Gas & Electric offers electricity and natural gas, along with energy services for residential and business customers in a 2,600-square-mile service territory that extends from the suburbs of New York City to Albany.

What can Cascade software do for your company?