Adoption of renewable energy is a key driver in the fight against climate change. It’s worldwide implementation is critical to meeting the 2016 UN Paris Agreement goal of keeping the global temperature rise this century well below ‘2 degrees Celsius above pre-industrial levels’.

Renewable energy can be produced from a variety of sources including wind, solar, hydro, tidal, geothermal and biomass. Electricity generated from wind and solar energy sources are predicted to increase significantly over the next 30 years, with wind and solar delivering 33% and 29% respectively of the world’s electricity demand in 2050.

Solar energy
The predicted increase in use of electricity generated from solar energy sources is predominantly attributed to cost reductions. It is forecast that by 2050, production and installation costs for solar farms are set to be 60% lower than today’s costs. These are substantial savings. However, any reduction in cost should not diminish the integrity of the solar farm assets which is dependent on both the solar cells and their supporting structures.

Generally, the integrity of the solar cell is well controlled as it is critical to ensuring efficient electricity generation. However, it is important that the long-term reliability of the supporting structure is also considered. A wide variety of materials are used to construct the mounting framework for solar cells including aluminium, stainless steel, and galvanised steel. The materials selected are typically based on the expected loads the structure will need to take in service rather than anticipated corrosion rates.

In the last 12 months, DNV has witnessed an increase in the number of enquiries we receive regarding calculating the estimated remaining life of a solar farm. These enquiries are often instigated by annual inspection findings that include observations of accelerated corrosion of mounting frames.

External corrosion of supporting structures is often exacerbated by environmental conditions which are highly dependent on installation location e.g. coastal environment, agricultural environment. Although corrosion is often superficial when first reported; gradual corrosion mechanisms if not remediated can ultimately result in the failure of an asset.

Fortunately, there are a number of corrosion mitigation measures available. For example, if a corrosive external environment has been overlooked in the design phase, in-situ corrective options including coatings and barrier systems can be implemented without excessive disruption to the assets operation. 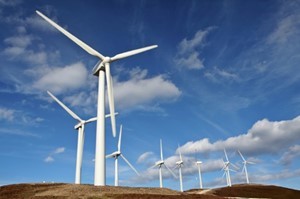 The challenge facing the rising use of wind turbines is the aspiration to produce turbines with a much larger capacity for power generation. New wind turbine designs include larger blades which increase energy extraction and power generation to 10MW; an average onshore wind turbine currently has a capacity of 2.5 – 3 MW. This means that components of the wind turbine have to meet increasing materials demand, in addition to reliability and cost reductions.

A few of the demands on wind turbine blades alone include:

The design assurance process for a wind turbine installation is often more comprehensive than that for a solar farm. The cost of installation and maintenance of these assets is more substantial and as such the emerging challenges with in-service assets are not typically corrosion related but quality related.

Like solar energy, the use of wind turbines has boomed in the last few years increasing by 35 % between 2010 and 2018. This means production has had to increase rapidly. This has, unfortunately, led to numerous failures associated with quality assurance; a process that is difficult to control when working to tight lead times.

Failures are invariably related to fatigue as wind turbines are subject to cyclic stress. Optimization of both component and weld design is important in fatigue mitigation, and due consideration for the cyclic load should cover both the dynamic and the notionally static structures. It is critical that any structure is defect free to inhibit the effects of fatigue.

Defects in turbine components can be introduced in the fabrication and assembly line. Typical failures observed by DNV are often associated with fabrication and include both poor quality welded joints and mismatched materials.

Like any new-to-market product, mass production of renewable energy assets presents commissioning challenges. However, insights from failure investigations are constantly leading to upgraded designs and new on-site remediation techniques. Advances in efficiency, quality control, integrity management and corrosion mitigation allow renewables to win out in both ecological and economical terms. The worldwide effort of materials engineers in this industry provides the opportunity for an unprecedented global transition in energy supply.