Ammonia-fuelled engines have the potential to allow zero carbon shipping operations. The AEngine project aims to develop and demonstrate a two-stroke engine fuelled by ammonia that operates reliably, efficiently and safely.

Decarbonising shipping demands the development of power producing engines and equipment operating on non-carbon fuels. Ammonia contains no carbon and is rich in hydrogen, making it a potential energy source assuming it can be produced sustainably and at scale. However, there are significant but not insurmountable technical and safety challenges associated with ammonia as a marine fuel. It is an untried fuel for large engines and presents problems with regard to combustion characteristics and NOx emission control. It is also toxic.

Demonstrating a reliable and safe engine will be a catalyst for scaling up of ‘green’ ammonia production and acceptance by shipowners and builders. Also, new maritime production capacity needs to come on top of existing production of ammonia that is mainly allocated to fertilizers and hence food production.

Developing and demonstrating the ammonia-fuelled engine

DNV is partnering with MAN Energy Solutions, Eltronic Fueltech and Technical University of Denmark on the AEngine project, which aims at making the first two-stroke ammonia powered engine. The project is now moving towards the testing stages and developing emission abatement measures for the control of NOx and N2O.

DNV is handling the safety aspects and will be performing risk assessments with regard to HAZard Identification (HAZID), Hazard and Operability (HAZOP) and Failure Mode and Effect Analysis (FMEA). In its role as a classification society, DNV will also be developing regulations on ammonia purging and venting.

MAN Energy Solutions is planning to have an engine ready for commercial use in 2024. 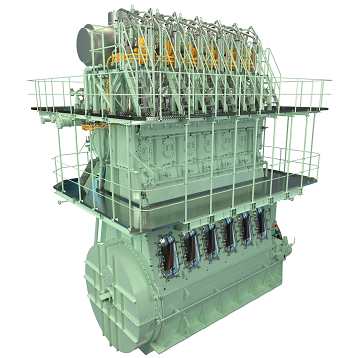 Working with industry partners such as DNV in decarbonizing the maritime industry is paramount for MAN Energy Solutions. The AEngine project is an important collaboration to reach our goal to make a dual-fuel, two-stroke ammonia engine commercially available for large-scale ocean-going ships by 2024.
Stefan Mayer,

Green ammonia – produced by electrolysis powered by renewables or nuclear – is an excellent source of zero-emission fuel, provided that associated N2O and NOX emissions are managed appropriately. Current production of green ammonia could be spurred by demand from shipping, making it more financially viable as a fuel.

Currently there are about 200 gas tankers that can take ammonia as cargo and typically 40 of them are deployed with ammonia cargo at any point of time. These will naturally be candidates for the first ammonia-fuelled engines since they already have the fuel as cargo and have experience with handling ammonia. Other cargo-carrying ships could also use ammonia as fuel, and the experience from such ships should be used before introducing ammonia on passenger ships and cruise vessels.