During the first six months of the COVID–19 pandemic, Port State Control (PSC) regimes reduced the number of PSC inspections to a minimum with a focus on high-risk ships. Now, and despite the upheaval of the pandemic, some PSC regimes or single countries are coming back to performing almost the same number of inspections as before the pandemic. This PSC news provides an overview of the actual inspection activity in different PSC regimes, a situation which may change quickly.

Relevant for ship owners and managers.

PSC regimes agreed on a set of pragmatic guidelines on 8 April 2020, which includes issues such as accepting delays of survey periods, inspections and audits, and extension of periods of service for seafarers. These guidelines are still in force for all PSC regimes but are subject to a constant review in light of further IMO/ILO initiatives or developments of the situation by individual PSC regimes.

Now, however, several PSC regimes and/or countries are going back to the inspections and procedures that were in place before the pandemic. Safety measures have been implemented to minimize infection risks for the crew and PSC inspectors.

The IMO published on 2 June 2020 a “Guidance for flag States regarding surveys and renewals of certificates during the COVID-19 pandemic”. DNV GL expects the reasons for the extension of certificates, delay of surveys/audits or service periods will be checked in more detail by PSC authorities.

Furthermore, the extension of service periods onboard for seafarers is increasingly gaining attention by the ILO and its member states. For details and guidance, see “Information note on maritime labour issues and coronavirus (COVID-19)”, issued on 10 July 2020. It is expected that PSC authorities will focus on the certification and service periods onboard during upcoming PSC inspections.

The agreed postponement of all Concentrated Inspection Campaigns (CIC) for 2020 has been kept. However, local campaigns may be initiated, such as the Focus Inspection Campaign by Australian Maritime Safety Authority (AMSA) – for more details, see below.

The local development of COVID-19 infection numbers is the reason for different approaches by the PSC regimes and their member countries. Below is an overview of the current inspection situation of major PSC regimes: 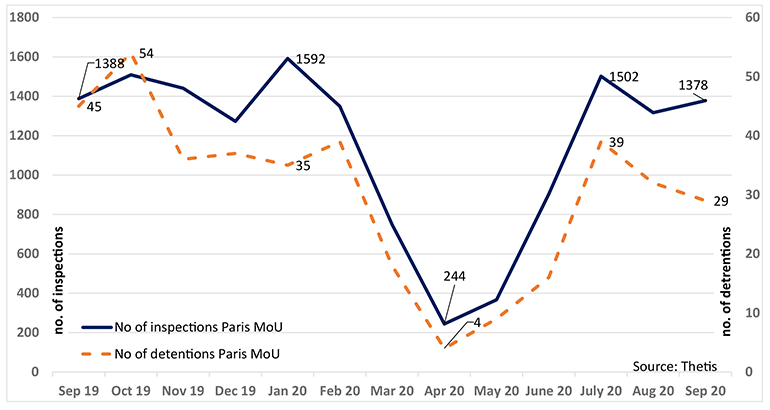 The number of inspections shows a significant drop starting from the beginning of March through May 2020. Since June, the numbers have been recovering again to a nearly normal level. The guidelines by Paris MoU (link below) are applied by the member states on a case-by-case basis, ensuring that members can react to local developments of the pandemic. This is evident in some member states, such as in the UK, where inspection numbers remain at a low level compared to last year.

The clear focus on the extension of service periods onboard for seafarers can be observed, as Seafarer Employment Agreements (SEA) rose from 8th to 3rd position on the list of top deficiencies in 2019 until August 2020 within the Paris MoU. 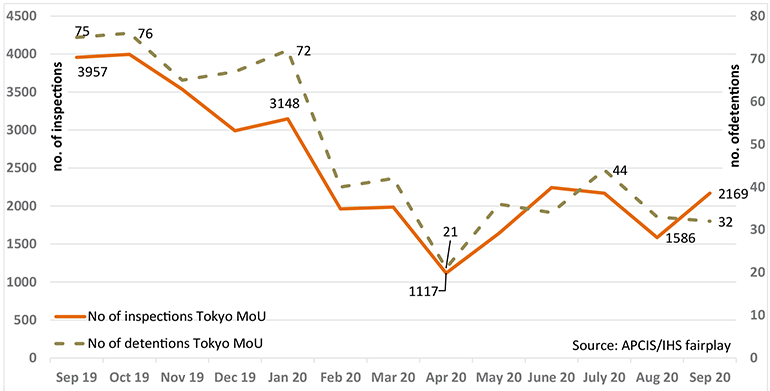 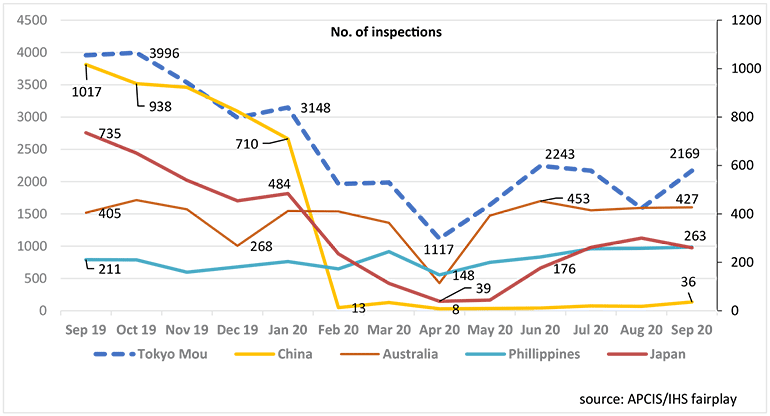 The above chart of PSC inspection numbers for the Tokyo MoU shows the differences within this PSC regime. Like most of the MoUs, the overall number of inspections experienced a major drop in April this year but has not yet recovered to previous numbers from before the pandemic. This is mainly driven by the inspections carried out by PSC in China, remaining at a low level. The overall detention ratio was around 2%, except in June and August this year when few inspections resulted in a detention.

Another example is PSC inspections by AMSA, which were returning to previous inspection numbers very fast, and Japan, which is recovering very slowly.

Furthermore, Australia is the PSC country with the most detailed guidelines and publications about COVID–19. This is even further demonstrated by the detailed instructions and requirements for the well-being of seafarers and their period onboard (link below).

Finally, Australia is carrying out a Focused Inspection Campaign (FIC) on a technical topic in 2020. The focus is on cargo securing arrangements from 1 August to 31 October 2020, as already published in our Technical and Regulatory News No. 16/2020. 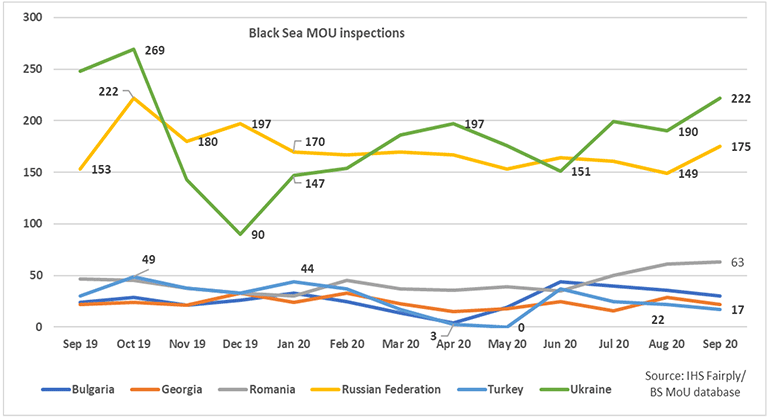 The most active port in this region remains Novorossiysk, Russian Federation, with more than 900 inspections in 2020. Roughly 50% of all detentions within the Black Sea MoU were issued in Novorossiysk in 2018, 2019 and 2020.

In the USA, there was only a drop in PSC Inspections in April, when the number of inspections went down to 58% compared to 2019. During April, no ship was detained, whereas the number of detentions is normally around eight cases a month. From May, the inspection activity went up to a level of almost 70% compared to last year.

Within the South American PSC regime, the development of inspection numbers depends on the COVID-19 situation in the member state, as with the other MoUs. In March of this year, there were nearly no PSC inspections recorded for this region. Some members started already in April to inspect more vessels, such as Argentina, Mexico or Chile, although this year’s numbers are far behind the ones from last year. Only Brazil jumped in August from less than 10% back to 75% of the inspection level from 2019. Detentions are in general at a low level.

Inspection data from other MoUs are either included in the explanations above, for instance Riyadh MoU members are also reporting to the Indian Ocean MoU, or the data available does not allow to draw conclusions.