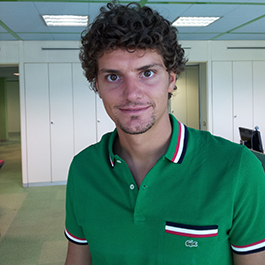 With Maros we can do availability analysis in a smarter way.
Ivano d'Amato

When Eni decided to take full control of RAM analysis - reliability, availability, maintainability - their first choice was to use Maros software

“With Maros we can do availability analysis in a smarter way,” says maintenance engineer Ivano d’Amato of Eni.

Mr d’Amato and his colleague Sergio Calarco, also a maintenance engineer, are based in Milan at the maintenance engineering technologies department of Eni. Prior to 2010 they were outsourcing their RAM (reliability, availability, maintainability) studies. They subsequently decided to take control of the process by purchasing DNV’s Maros solution.

The main reason for the decision was that often there was very little flexibility when analysing the results from outsourced projects. “We decided we needed a more flexible solution,” says Mr d’Amato. They selected Maros in order to play a more active role in checking the suggested changes to the design and maintenance.

The next step was taking full control of the process, developing in-house expertise in RAM analysis and building up their own models. “We wanted to do our own RAM analysis internally, starting from the conceptual phase,” he says.

After some research in the market, one of the main contractors of Eni advised that Maros was the most complete and userfriendly solution for RAM analysis for oil and gas assets.

Eni then received onsite training from DNV on how to conduct a RAM study. The importance of performing RAM analysis during the conceptual phase cannot be underestimated. “It means that we can investigate the best design configuration to develop, and we can effectively make changes to the design in the preliminary project stage,” says Mr d’Amato. They then are able to check what effect these changes have on the overall system performance.

Main benefits of Maros compared to other RAM software are its flexibility and its ability to account for different aspects of asset management. The software has extensive maintenance modelling capability and takes into account key parameters such as vessel mobilization and weather conditions, which are then used to model particular operational situations. “With other reliability products it’s not possible to model these scenarios, and that affects the accuracy of the prediction. That’s not flexible,” says Mr d’Amato.

“RAM study is a very useful tool to compare different designs. It should not be used only to compute performance,” says Mr Calarco. “In plant design there are a lot of interrelated variables that have a major influence on the performance.”

Maros allows engineers to perform several analyses considering issues related to equipment reliability and configuration, maintenance strategy and, most importantly, the operational assumptions. “We can identify bottlenecks in plant configuration and plant operational management. It allows us to find particular issues we may not previously have considered,” he says.

RAM analysis is applied to many projects in the conceptual phase in Eni. A base case replicating the current design and maintenance strategy is built. The results include a general picture of the performance and also an overview of the key contributors of production loss. Using the base case as reference, several sensitivities are performed checking mainly which systems are critical and need a redundant production path.

Maros helps to optimize the numbers of equipment, such as rotating machinery, reducing redundancy and overcapacity, saving optimizing costs in plant execution by reducing investments, or focusing them where they are more effective. The operational expenditure is also reduced as the reliability of the system is increased. The final result is less downtime, fewer failures and saved cost.

Currently, there are five to ten users of Maros at Eni. The scope of use may grow, as the operations department is starting to familiarize itself with the software.“Maros is becoming more and more user-friendly with the next generation,” says Mr Calarco, referring to Maros 9. He is looking forward to using the new sensitivity manager tool. “The new tools are very useful for faster modelling.” Maros 9 has increased usability, making it easier and faster to model complex scenarios.

The use of Maros is growing, even among Eni’s contractors. Contractors are required to deliver a model when performing RAM studies using Maros, says Mr Calarco. “We want to have full control,” he says.

Read more about RAM analysis for upstream oil and gas

What can Maros software do for your company?