Failure Modes Effects Analysis (FMEA) and its extension, Criticality (FMECA), is a process analysis tool used to identify potential failures that could affect the performance of a piece of equipment and/or asset. In the oil and gas industry, FMEA/FMECA is often the first step of the RAM analysis. But how do you go from FMECA to RAM studies?

FMEA/FMECA is typically perceived as inherently simple but extremely powerful tool. In the oil and gas industry, the method allows analysts to systematically identify potential failure modes for equipment items (or an entire production process) and assess the risks associated with these failure modes. This approach enables the analyst to establish a qualitative criticality which can be based on categories such as safety, environmental, reputation, business and so forth. With information about the associated risk, corrective actions can be prioritized to address the most severe consequences. So the analysis gives you both where to focus and where not to focus.

To incorporate the criticality analysis on a more quantitative basis, the risk is evaluated by subjective measure of the severity and an estimate of probability. Depending on requirements, an additional level of risk needs to be captured. This is known and reported as the Risk Priority Number (RPN) and can be derived by using these three scales:

In regards to the Criticality analysis, analysts can assign quantities to a number of factors in order to quantify the aforementioned Criticality ranking. The process of quantifying the risk of individual failure modes is described below.

With this information, the degree of importance can be extended to accommodate two important factors: conditional probability of the current failure mode’s failure effect and duration of applicable mission phase, as shown in this equation:

In essence, it is a mathematical means to provide a number in order to rank importance based on its failure rate.

One small caveat here – failure rates for redundant systems must be taken into account! Check DNV-RP-D102 for FMEA of Redundant Systems and TM 5-698-4 on page 4-10 for a better description.

There are a number of reference standards that provide assistance in learning about FMEA/FMECAs:

In these references, a number of different templates exist for FMEAs/FMECAs. These are great starting points that can be modified and customized as necessary. As an example, information was gathered from several references to build the following spreadsheet: 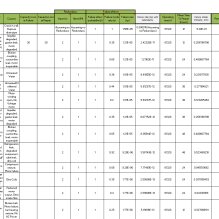 The FMECA example can be downloaded from:

(Press “No, thanks. Continue to view” if you don’t have a DropBox account”).

The example also comes from TM 5-698-4. We’ve used this document as reference because it quantifies the most failure modes.

While FMEA and FMECA identify important risks, its methodology does not lend to representing the full risk picture and therefore presents a few limitations:

Taking everything that was mentioned above into account, results may not be as comprehensive as you would expect.

So this is exactly where Reliability, Availability and Maintainability (RAM) studies come to the rescue! The Maros and Taro Application Programming Interface (API) tool helps you transfer the information created in the FMEA/FMECA spreadsheets into a RAM model. So the knowledge acquired and value added throughout the workshops is retained and moved to the next step of the project.

Advanced RAM analysis combines the Monte Carlo method to simulation techniques – we have explained this combination a few times, you can refer to this post to learn a bit more about the importance: Production availability and capacities and Statistics and Probabilities – The heart of RAM analysis.

The spreadsheet incorporate some VBA coding that can be extended to suit your needs (if you have feedback on something that is missing, please let me know). More importantly, one can use the FMEA/FMECA spreadsheet to automatically create a RAM model. All you need to do is press the button “Create data for RAM Model” and move to the next tab. Give it a quick check and press “Build RAM Model” – a Maros model will be automatically created!

With the RAM model, the valuable information acquired in the FMEA/FMECA is moved to the next stages of defining the overall risk picture. The simulation process will test many scenarios, for instance, when multiple and concurrent events are taken into account.

This post was written in collaboration with (the fantastic) Jeff Clemens and (the amazing) Crystal James (Crystal.James@dnv.com). Have you got questions? Please get in touch!

Small disclaimer: this spreadsheet is being offered free of charge so we cannot accept any liability on it. It would be nice to get people to work with us and improve it, in case you find any problems with it. In order to run it, you need to have a Maros 9 or above installed plus a Macro-enabled Excel.