What is considered “critical” today might be less critical in the future. In this blog post, Corey Rice advises pipeline planners and engineers on how to answer the question of what would happen if a critical regulator station completely failed. Corey, who is based in our Mechanicsburg, Pennsylvania office, is a Principal Technical Support Engineer for DNV GL’s Pipeline Solutions Portfolio.

What would happen if the most critical regulator station in our system completely failed?

This is my second blog post here; in my first post I talked about the Panhandle equation. It was fun – I turned it into a mini-research endeavor. But that was more of a gas transmission topic, and if you’re still reading these words right here, you likely work at a natural gas distribution utility. Also, in that first post, I was trying to school people. I have some thoughts to share with this, my second post, and hope to be more conversational and generate some dialogue.

The question – “What would happen if the most critical regulator station in our system completely failed?” – makes complete sense to ask if you’re the company president or another executive. That question may even reflect queries received from your local public utility/service commission or energy/review board if you’re further north, eh. Some of you who are planners or engineers may be thinking that the question is moot as you mentally review all of the different types of overpressure protection that’s been installed at your stations over the years: monitors, relief valves, automatic shutoff valves. The odds of a COMPLETE failure are next to zero. But to quote a wise man – “So you’re telling me there’s a chance?”

So even though you know how low those odds are, as a planner/engineer, you still may need to go ahead and answer that question.

This blog post is already getting wordier than I intended, so I’m going to fast forward through the parts where I ridicule the notion of a singular definition of criticality, given how differently a gas distribution system can operate at different times during the day, week, month, and year. What’s “critical” today in November 2020 may be less critical in six months after we’ve finished construction on the new Stark tower complex.

Now that that’s out of the way let me present my idea for a singular definition of criticality. Actually, before that, let’s put up a visual. A map showing results for a hydraulic network model of a brand new system no one’s ever seen before: 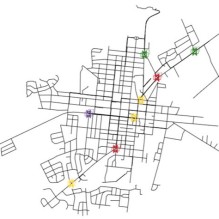 To evaluate an overpressurization event in which one station completely fails open, the purple station is the “worst,” followed by the two in red, the three in yellow, and then the two in green result in no areas seeing a pressure higher than their maximum allowable operation pressure (MAOP). This MAOP is a critical (pun intended) component of the overpressurization discussion. But for this supposedly brief blog, I’m assuming that you know all about how your local jurisdiction requires the computation of the pipeline MAOP, and for modelling purposes, you have applied the appropriate value.

Let’s return to that proposed definition of criticality, examining those three stations in more detail: 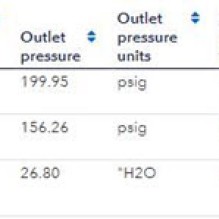 When we fail that first station, “P641 Station”, completely open, the calculated outlet pressure is 199.95 PSIG. This is based on the inlet pressure of 199.98 PSIG and the regulator constants & equations defined at the operators/monitors within that station. 1007 customers downstream of this station see a pressure higher than the maximum pressure set on their main. But you’ll notice that the station on the row below, “US11 Station”, also has 1007 customers listed, but its “Global score” is lower.

Due to the different sizes of the regulators at the station and potentially a different flowrate (flowrate is not recorded in the analysis), the outlet pressure at this second station is lower, at 156.26 PSIG. This results in those 1007 customers downstream seeing a lower pressure than when the first station is failed open. In both cases, the pressure exceeds MAOP, but by different magnitudes. The third station, “WILLOW STATION,” results in 1220 customers downstream that see a pressure greater than the MAOP, but the largest pressure seen downstream is only 16.8 inches H2O above said MAOP. For all the folks outside the stations that are utterly baffled by the introduction of water, here are those three stations in normal units: 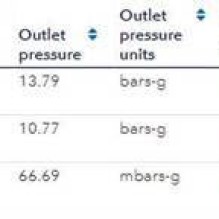 The Global Score is also weighted by the size of the demand at the nodes (and pipes) to influence areas with large customers that will influence that score value higher.

Wait, is that the final answer? And where did those screenshots come from?

Well, I can’t tell you which station is the “most critical.” But I think you can use the Global score to help you make a determination like that by running analyses on multiple hydraulic models and comparing the results of these analyses. For those of you responsible for systems with hundreds of regulator stations, this sounds like a huge, time-consuming endeavor to answer a question that we all acknowledge is incredibly unlikely. Allow me to share one last screenshot: 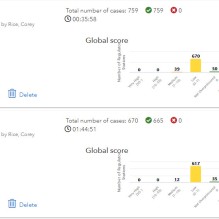 These are the two largest imaginary systems that I have, run simultaneously in our new Synergi Pipeline Overpressurization application. In the example shown in the screenshot, we have the hydraulic results from more than 1400 regulator stations. It doesn’t seem so daunting to have to repeat this process for additional models and then compile the results.

I promised a conversation at the start, but I’ve been pontificating for over 800 words without asking a single question! As highly as I may think of myself, this Global Score certainly isn’t the best option for every utility on the planet. So, my question to you – what sort of metric would you, or do you already, use to characterize the criticality of your regulator stations from a hydraulic standpoint? What do you think we could do to improve on what we’re doing here with the scoring? Leave a comment below or email me directly.

For more on our Overpressurization application, including how it ties into our Regulator Station Risk Model, contact me for a video recently recorded. I’ll also present the topic at the Pipeline Simulation Interest Group (PSIG) Conference in May 2021.