As part of the second episode of our latest Talks Energy documentary – The race to deep decarbonization we spoke to Rachel Ruffle, CEO (Northern Europe) at  RES  about the need for capital and policy to work together to achieve climate goals and decarbonize the energy sector.

There is a “wall of capital” waiting for industries seeking to decarbonize their operations, explains Rachel Ruffle. The challenge, she says, isn’t just unlocking that investment, it’s the need for “stable” regulatory policy and investment in the broader infrastructure to support the transition to clean, renewable energy.

Speaking on the podcast, Rachel says that bringing about the tangible and effective deployment of electric and hydrogen-based technologies into society means striking “a balance between the high-level ambitions and short-term targets” of energy policy makers and the industries that they serve.

“Moving from the margins to the mainstream, it now becomes a whole system question,” she says. “Whereas before tiny amounts of renewable electricity weren’t impactful on the system, we’ve had to see networks and grids adapt to accommodate all of this renewable and variable electricity.”

With the European Union (EU) seeking to reduce greenhouse gas emission by at least 55 per cent below 1990 levels by 2030, Rachel says that, while persuading investment in renewables was once the biggest challenge facing the energy market, building infrastructure for renewable energy to meet growing demand is the most pressing test today.

"It’s an easy choice,” she says. “It’s cheaper to build new renewable energy than it is to build fossil fuel energy. And there’s not much change on demand – the washing machine works the same if it’s on green or brown electricity.

For industry though, more sweeping changes are necessary: “Carbon-intensive industries like steel manufacturing do really need to change their practices. What will it take for them to do it? I think carbon pricing comes in here – a robust carbon-pricing model worldwide reflects the ethos that the polluter pays, and that carbon pricing accurately accounts for the true cost of emissions and the true cost of global warming.”

These industries have come to be known as ‘hard to abate’, that is to say that their output – steel, for example – relies on consistent energy supply: “Now we’re getting into the difficult bit: how to manage the variability of renewable electricity,” Rachel explains. “When we started 30 or 40 years ago, that issue wasn’t the big problem, it was convincing people that this technology does actually work.”

We’ve moved beyond that now and the challenge of ‘deep’ decarbonization means tackling those big questions head on:
“There’s an increase in the energy storage market, which can really manage the short-term fluctuations of electricity as can the big uptick in the hydrogen market to tackle those hard-to-abate sectors of heavy industry while providing balancing on the grid for when it’s not windy or sunny.

“I think rapid advancements in technology are enabling the transition and we’re at a point now where the technologies that are required are in place.”

When it comes to unlocking investment, Rachel believes there’s a strong case to incentivize industry to make the switch to renewable energy, Ruffle says that supporting companies in the transition is just as important, adding that some of the revenues from carbon pricing could be used to train people in “the transition to green jobs”.

“The other role I think technology will play will be increased digitalization,” Rachel expands, “and the use of Industry 4.0 to manage this more decentralized grid and manage this supply and demand and to help it become a more consumer-led transition.

“I think there’s still a game between the high-level ambitions and short-term targets necessary to actually get the ball rolling, so while I welcome the commitment, what we need is short-term roadmaps and targets.”

These should also include bans or efforts to disincentivize new-build fossil fuel investments, as set out by the International Energy Agency (IEA), she says, while also insisting that new projects shouldn’t be allowed to “exploit fossil fuels”.

“Closing that gap between ambitions and absolute plans, I would like to see that,” she says. “There is a wall of capital wanting to invest in green technology. However, we don’t have enough projects to sell to our customers.

“It feels like availability of renewable energy projects is the bottleneck to the energy transition. Investment does need a stable policy landscape in order to thrive and to reduce the cost of that capital, so investors require a lower return when they can see a long-term stable investment.” 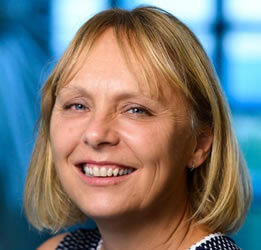 There is a “wall of capital” waiting for industries seeking to decarbonize their operations
Rachel Ruffle,