Determining why collecting operational-phase met data is beneficial to your wind farm.

Wind project developers commonly collect meteorological (met) data during project planning, feasibility, and design. However, once the project is operational, this data collection often stops. There is no “industry best practice” for collecting met data during operations or even if you should continue collecting this data. Additionally, there is little clarity regarding which measurements are appropriate, often resulting in insufficient and potentially useless data.

Based on DNV’s experience, accurate, consistent, and long-term met measurements are advantageous to the overall success of a wind project. While each turbine is equipped with anemometers to measure wind speed, these are located behind the rotor and are consequently unable to accurately measure the true free-stream conditions. Therefore, each site should install at least one met mast or remote sensing device.

Here are several reasons why collecting operational-phase met data is beneficial to your wind farm:

Safety requirements at wind projects commonly limit activities to certain climatic conditions. For example, climbing a turbine to service components in the nacelle may only be permissible when winds are below a certain speed, and another lower threshold would typically apply to performing work in the hub. Other requirements apply when cranes are operating at a project, such as when a blade needs to be replaced. Reliable on-site, hub-height measurements aid safe operations and bolster safety-related operational decisions.

Power performance testing is routinely performed at many wind projects (generally by an independent testing agency like DNV) to analyze the wind speed, air density, and power per the IEC standard to determine if the turbine meets the manufacturer’s warranted power curve. These tests are performed for numerous reasons, including:

Windiness and performance versus budget

To reconcile how well the project is performing compared to expectations, you first need to determine how windy the period was (how much “fuel” the project received). A consistent, unwaked, long-term time series of wind speed is required to compare the period in question with long-term expectations. Using on-site data increases the accuracy of the calculation, given small changes in wind speed can significantly impact energy generation. For example, a 2% difference in average wind speed over a year (a difference small enough to be difficult to measure, absent careful controls) translates to a 3%-4% difference in energy production. 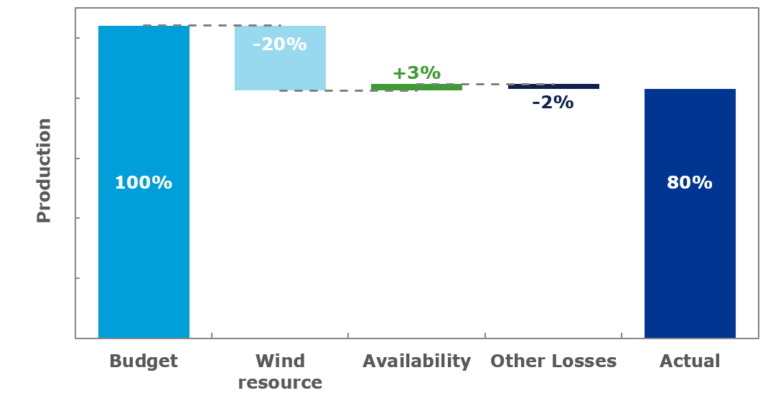 Evaluating future production potential is important for future budgeting and for financial transactions related to operating projects. Future energy production may differ from past energy production for two primary reasons: turbine upgrades or a change in the forecast baseline.

At many sites, the project owner, investor, or utility requires a calculation of the amount of energy that would have been produced had the project (or portion of the project) been operating at a specified efficiency. Met data are valuable for calculating lost energy and may be a contractual requirement. There are several circumstances in which lost energy calculations are needed: OEM contractual obligations, production guarantees, insurance, proxy revenue swaps, and economic curtailment.

Due to the increasing penetration of wind power in certain grid operations regions, some Independent System Operators (ISO) are requiring robust, real-time, met mast data from generating plants on their systems to support their short-term generation forecasts. Wind project operators are also increasingly requiring forecasting met data to support their energy sales and to ensure that they can meet their generation commitments to the ISO.

For either ISO or project operator forecasting, continuous availability of met data is of paramount importance; ISOs have implemented strict requirements for data availability and may levy fines for non-compliance. ISOs typically specify data from a hub-height upwind met mast or remote sensing device.

Occasionally, catastrophic events occur, such as blade failure or tower collapse. To determine the cause of failure, it is essential to understand the environmental conditions that led up to the event, such as whether the wind speed exceeded design criteria during a hurricane or tornado. On-site independent met data are irreplaceable in making this determination since the nearest ground station (airport or similar) may be miles away, and reanalysis weather models have too poor resolution to capture localized wind gusts.

Collecting reliable meteorological measurements on a wind farm enhances the owner’s understanding of the wind conditions on site, ability to make operational decisions, and capacity to evaluate – and potentially improve – turbine performance.