Explosions are a complicated physical phenomenon which science continues to investigate. Major accidents such as Buncefield, Texas City and, more recently, at the Amuay refinery in Punto Fijo Venezuela, have focused attention on assessing the effects of Vapour Cloud Explosion (VCE) on assets such as buildings and process equipment, as well as people.

In recent years much research has been undertaken to improve the accuracy and understanding of the mathematical modelling of Vapour Cloud Explosion (VCE). This has resulted in the development of simplified empirical models based on Computational Fluid Dynamics (CFD) calculations and the results of experiments. The two most well-known models to emerge from this research are the TNO Multi Energy Method (ME) and the BakerStrehlow-Tang Model (BST). These two models require analysts to define the interaction between congested/confined regions with the flammable cloud profile.

This large number of scenarios makes Computational Fluid Dynamics (CFD) based models -generally considered to give the best approximations of these phenomena – impractical use for day-to-day. Additionally, in most consequence calculations performed in the context of a QRA (Quantitative Risk Analysis) or worst case analysis, the complexity added by CFD models is unnecessary.

Taking all this into account shows that the “simplified” models mentioned above as a powerful alternative. They have been designed to solve the aforementioned problems by allowing a reasonable level of characterisation with less geometric and physical complexity, placing emphasis on the key parameters that are known to have a significant influence on the consequences in terms of overpressure and impulse.

This also highlights one of the benefits of running an integrated model – the dispersion calculation can be combined to the definition of multiple buildings defined in the process plant to understand the interaction of a flammable cloud profile with congested/confined regions of process plants in all three dimensions. This can then associated with a multiple hazard scenarios.

Another important aspect is full control over the release direction – Why does this play an important role? It allows considerations that apply in certain release directions (e.g. surface roughness and wind speed) to be taken into account as opposed to using global settings for all release directions. This means that more scenarios can be calculated improving the decision-making process.

Regarding the results, a detailed VCE modelling requires the creation of combined hazard contours resulting from a range of scenarios to a defined threat level (e.g. 0.1 barg overpressure). This results is particularly useful in examining the overall impact of a range of scenarios simultaneously: 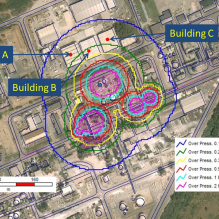 The following video takes you through the approach used in Phast with its 3D Explosions capability. The idea is to break down the modelling steps to create overpressure contours across an entire site for potentially thousands of explosion scenarios.