Corresponding with Global Energy Storage Day, DNV has embarked on a partnership with WattTime, a tech nonprofit whose software and emissions analysis empowers customers to choose cleaner energy.

Corresponding with Global Energy Storage Day, DNV has embarked on a partnership with WattTime, a tech nonprofit whose software and emissions analysis empowers customers to choose cleaner energy. Through this partnership, DNV is able to empower its clients to make decisions that deliver the greatest clean energy impact. This is the first in a series of blog posts to lay out a framework to benchmark the operational emissions and quantify the economic and environmental tradeoffs associated with different use cases of energy storage. DNV and WattTime consider this an extremely important topic given the expected 122-fold increase in storage capacity globally between now and 2040.1

There is uncertainty about how energy storage fits into the century-old categories of electric grid infrastructure: generation, transmission, and distribution. There is a case to be made that storage fits into all of the above, or that it is so different as to stand on its own. Regardless of its taxonomy, energy storage is widely described as the grid’s savior, having been hailed as “the holy grail” for the grid, a “swiss army knife,” and even “bacon for the grid” (because bacon makes everything better)!2 Part of why storage is held in such acclaim is its association with greenhouse gas (GHG) emission-free renewable energy, with more than 50% of US storage capacity already paired with solar projects, a trend expected to continue.3

Despite the nuance around categorization across the broad swath of technologies and products encompassed within energy storage, there is no debate that energy storage in all its forms is a net load on the grid. 4 This is neither good nor bad, but simply a fact that energy storage consumes more electricity while charging compared to discharging due to the inevitable and immutable laws of thermodynamics, and as such we must quantify this load in terms of its emissions impact.5 Like any other energy load, storage increases the demand for grid electricity, and thus carries emissions impacts which fluctuate depending on which power plant responds to its call for energy, and which power plants it displaces when it discharges.  However, thanks in large part to its flexibility, storage can be managed in a way that minimizes emissions and maximizes revenue; and, understanding the potential tradeoffs between those primary movers is critical when optimizing for both.

Quantifying the GHG emissions or reductions from energy storage charging and discharging is more complex than that for conventional fossil and renewable power plants. Fossil fuel power plant emissions can be calculated based on the conversion efficiency of the fuel (e.g. coal or gas) into electricity or through direct emissions measurements at the smokestack. The avoided emissions benefit of renewable energy projects can be calculated based on the energy generated each year that displaces the generation from other emission-causing electricity sources in the grid, typically a mix of fossil fuels. For energy storage, there are more factors to consider.

In contrast to power plants, storage charges from grid electricity at one point in time and discharges at another. As a net load, storage always charges with more electricity than it can discharge. If grid emission rates at the time of charging were exactly equivalent to those at the time of discharge, storage would always indirectly create a net increase in emissions, much like any device we plug in. However, this is not the case. Power grid emissions change dramatically throughout the day, season, and year based on weather, supply, demand, and other physical and economic grid conditions (see Figure 1). Storage can decrease emissions by charging during times of low grid emissions and discharging during times of high grid emissions. 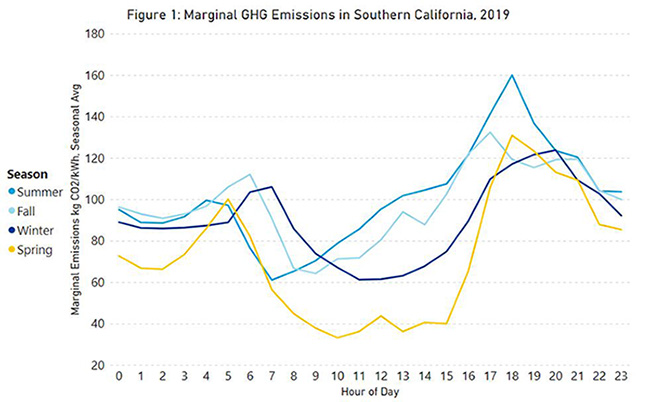 Like any grid project, storage is typically operated to maximize revenue. In most global markets, project revenue is not directly derived from reducing GHG emissions, but rather from selling electricity and other grid products.6 Like emissions, electricity prices vary by hour, day, and year, but are not always correlated with grid emissions. In California, solar production imparts an outsized inverse impact on energy prices (high solar production yields low energy prices) and a relatively muted impact on the marginal grid emissions which are driven primarily by natural gas power plants. Emissions and prices are correlated periodically throughout the year when considered at a more granular level (e.g. daily or hourly) but less so at a macro annual level (see Figure 2). 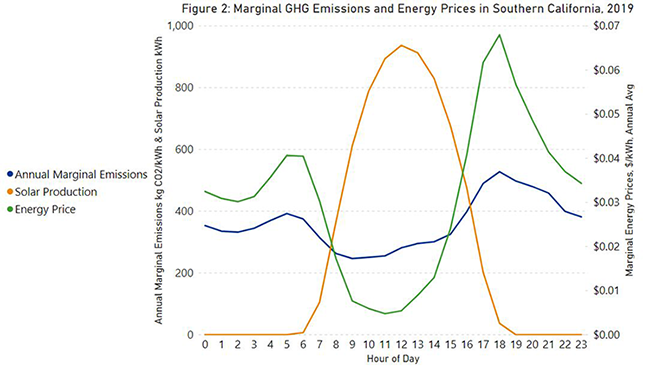 It is important to recognize that storage can absolutely be operated in a way to reduce emissions. The California Self-Generation Incentive Program (SGIP) for energy storage now requires projects to demonstrate operational reductions in net emissions from charging and discharging.7 The hundreds of projects participating in SGIP and the analytical framework developed by our partners at WattTime demonstrate that a modest economic incentive to alter storage operational strategies can ensure measurable and meaningful emission reductions.8

This paradigm shift will allow storage to fit more neatly into compliance mechanisms that to date have focused solely on renewable energy production. And as the grid mix becomes less based on fossil fuel sources and increasingly reliant on renewable energy, the net emissions associated with storage operations will implicitly become cleaner.

DNV recognizes the many grid and societal benefits that storage can provide but notes that not every project provides all these benefits. Even a project designed with every best intention can be operated in a way that contradicts its design.10 The operational aspect of storage differentiates it from wind and solar projects that are built simply to maximize energy output with every operational decision built around that goal. Storage can be operated to maximize revenue, reduce emissions, increase grid flexibility, shift peak load, improve asset utilization, and defer capital investments. As a trusted advisor to the renewables and storage industries, DNV offers services to developers, investors, utilities, and regulators that:

4 Pumped hydroelectric storage is the most widely deployed technology for this service globally but the focus of this post is generally on lithium ion or similar electrochemical forms of energy storage.

5 Losses occur in energy storage devices typically due to heat generated as the system operates, resulting in what is typically referred to as a roundtrip efficiency which is typically calculated by dividing the energy discharged by the energy charged.