Systems and process equipment in the oil and gas industry typically require maintenance resources and repair activities to sustain a level of availability. Maros and Taro present an extensive maintenance strategy modelling capability to cover maintenance and repair philosophies which includes monitoring services, equipment, manpower, spare parts etc. These features provide the ability to optimise system uptime. It cannot be over-emphasised the importance of designing a system with lifetime upkeep as a main parameter, even from the earliest conceptual ideas.

Obviously, before setting-up any models, users must have a clear objective for introducing maintenance modelling. Furthermore, the level of detail of the model together with the stage in the project lifecycle should reflect the status of the system being analysed. For example, there is no need for a comprehensive spare parts inventory analysis when comparing alternative concepts in the early stages of a study.

Let’s look at an example. A pump repair requires a pump seal replacement part. The full capacity of seal replacement parts is 5. When the stocking level hits 3 a restocking will be carried out; it takes 15 to 30 days to restock. For this example we assume the pump has a Mean Time To Failure of 0.5 years and Mean Time To Repair of 24 hours. The system life we are looking at is 2 years. The maintenance spare parts can be setup with the following main attributes:

So to summarise the inputs: 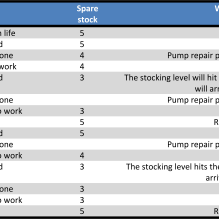 The case mentioned above helps to understand the concept but for extremely demanding spare parts analyses, it could be that additional spares are consumed during the restocking activity. In that case the level of complexity increases and further questions must be answered:

Let’s look at a scenario where spare parts are consumed, the replenishment level has reached its threshold and there is an existing order in place. An additional order will be issued independently but the number of parts ordered refers to the previous order plus what has been consumed.

In addition, when an existing order arrives, it will be added to the pool of resources given the current stock level. This kind of restocking process is called parallel restocking. In this kind of scenario, the threshold for restocking always equals the level of replenishment minus one when another order has been placed.

Let’s take the previous example and extend it. The spare seal replacement parts still hold 5 and restocked when we hit a stock number of 3. However, instead of one pump, now the system has three identical pumps in operation simultaneously. Additionally, the restocking time is extended to 60 days. 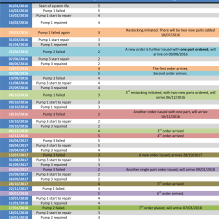 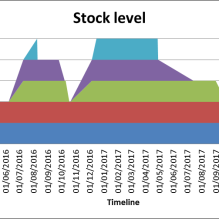 Understanding the impact of spares could be extremely complicated for multiple spare parts evaluation scenarios. Operational expenditure calculations can be included in comprehensive analyses in Maros and Taro.