How will the electric adventure vehicles stack up?

When the Rivian was first announced, we noticed a lot of similarities between how it was sold and how we had been thinking of electric overland vehicles as a potential to crush the competition. I am fortunate enough to live less than 15 minutes from the famed Rubicon OHV trail, so I have been really excited to compare whether the R1T and R1S could handle the trail. Is there any reason to pick the SUV over the truck? How will a legitimately capable electric off-road offering fare against the competition?

Sure, most people will use this thing as a purely on-road grocery-getter. But serious off-road and overland potential is what I care about. Let’s take a look at the stats from that perspective and compare against the most amazing stock rigs available. For a fair comparison, we have only included the 4-door variant of each vehicle.

It is the first stat you look at when buying an adventure vehicle. In mountain towns, ground clearance is mandatory just to find a parking space. The R1T and R1S both boast an astounding 14.9” inches of ground clearance, bone-stock. This makes the Rivian best-in-class by a full 3 inches.

Why is the electric car so much better in this category? It’s a question of components. As laid out in this Australian 4x4 article, components like differential, oil pans, and exhaust are often the lowest part of the vehicle, and most likely to snag a rock on the trail. EVs don’t need oil, or airflow - thus no oil pan or exhaust. As for the differential which often spells out the lowest point on a truck, Rivian’s hub-mounted motor design means no diff required. For these simple reasons, electric trucks are likely to continue a trend of stock ground clearances never thought possible.

When entering a steep dirt climb or driving over a massive granite boulder; there is a chance the front bumper might snag. The angle between the wheel and the bumper, which defines the maximum angle to enter a climb, is called “approach angle.” In my old s4 avant, the approach angle was so pitiful that I couldn’t even drive onto an auto ramp, let alone go rock-crawling.

When it comes to approach angle, the Jeep Wrangler is king, with the Jeep Gladiator being the most “approachable” pickup. The snub-nosed 4 wheelers are designed with approach in mind, and it shows on the Rubicon Trail. Nearly every vehicle out there is a Jeep.

Rivian? Right in the middle of the pack, though it is worth noting that the SUV has a better approach than the truck.

The Hummer EV1’s approach angle is very impressive, until you remember that the original Humvee could climb up a wall.

Breakover angle is the measure that determines if you will get high-centered on a trail. It is a function of ground clearance and wheelbase. Due to its high ground clearance, Rivian is out on top again...but there’s a catch. The R1S has a shorter wheelbase than the R1T, so while the the R1S is number one in breakover, the R1T ranks fourth behind the Ford Bronco Wildtrak Sasquatch and the Jeep Gladiator Rubicon.

The opposite of approach angle, departure angle measures how steep the truck can descend without dragging the rear bumper. Jeep designs its vehicles for the trail and takes these angles into account in every iteration. For all that hard work, the Wrangler Rubicon reigns supreme by two degrees. The Rivian R1S is close behind and the Rivian R1T finds itself close to the back of the pack. This is another stat where Rivian’s SUV shows promise over the truck depending on your application. Pickups in general have issues with departure angle, which is a balance between off-road capability and bed size.

This is a term some generations will remember from playing The Oregon Trail, on floppy disk, in elementary school. Water fording capability is measured as the depth at which the vehicle can drive through water without seizing the engine or ruining electronics. No. Air. Intake. Rivian absolutely demolishes the competition with the ability to ford well over three feet of water. No snorkel required. 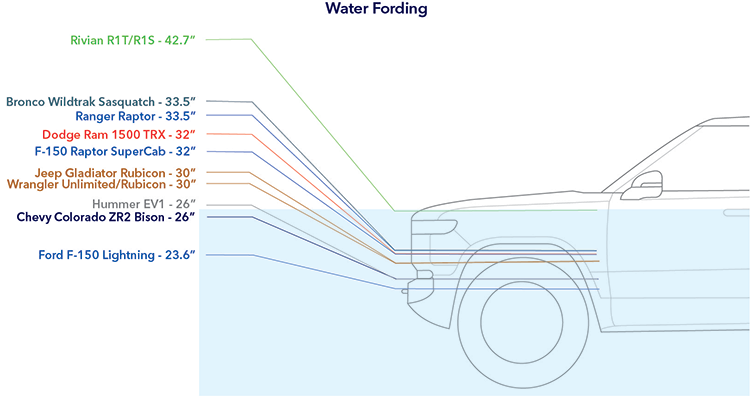 When it comes to horsepower and torque, the Rivian will crush the competition. Jeep just came out with its most powerful Wrangler ever made. The Wrangler 392 boasts 470hp and 470 ft-lbs or torque; and still looks completely anemic compared to Rivian’s 835 hp and whopping 908 ft-lbs of torque. 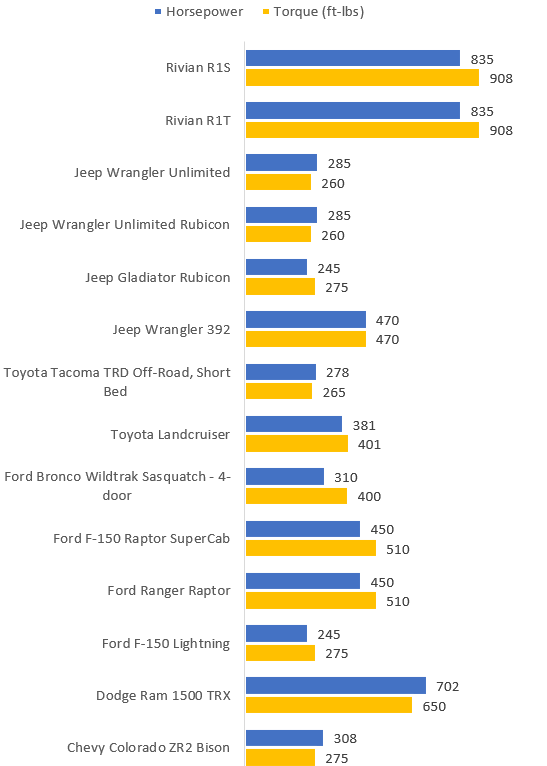 Here’s one stat where the R1T not only bests the competition, but also bests the R1S. If you’re looking to tow something beastly with electric drive, the R1T might be your answer. However, all that towing comes at a range cost - expect range to be cut in half when towing full capacity. While this is also true for internal combustion engine trucks, there are still many more gas pumps than charging stations in remote areas of the United States. 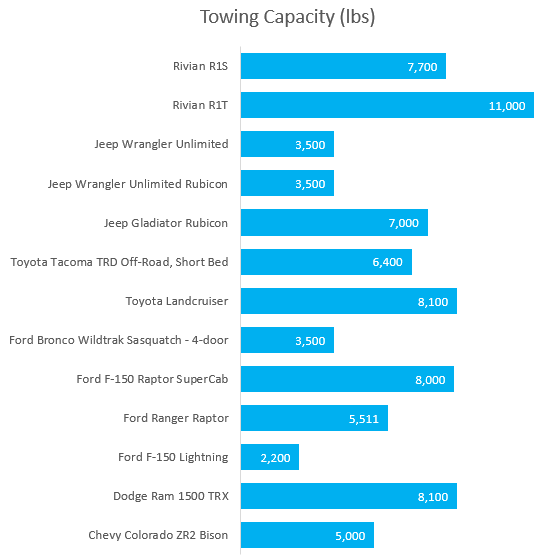 If you want to spend kUSD 60 and go rock crawling, buy the Jeep. If you want to spend kUSD 80 and have the off-road vehicle that is best-in-class in most categories and never have to visit a gas station again, get a Rivian. Me? I can’t afford any of this until Biden passes a sizable incentive, and I think that goes for many of the people reading this blog. See you on the trail…hopefully in the silence of electric off-roading.

Historic EV and infrastructure plan fresh off the President’s desk

Three lessons the U.S. (and Will Ferrell) can learn from the Norwegian EV experience

Listen to the podcast