At the VERGE 21 conference last October, Gomathi Sadhasivan, DNV’s Director of Customer Decision Sciences, spoke on an expert panel discussion on “How to build a resilient grid for the 21st Century.” The panel was hosted by Frank Koza, Electric Sector Coordinator at the Electric Infrastructure Security Council, and also featured Nathan Bengtsson, Director of Climate Resilience at PG&E, and Kristin Tremain Davis, Nature-Based Solutions Practice Lead at AECOM.

Recurring themes in the presentations included time — namely, not wasting it — and identifying the factors that can push progress on climate preparedness.

Gomathi kicked off her presentation by reminding everyone of the timeliness and importance of grid resiliency in the face of climate change. San Francisco had just had its wettest October day on record — records that go back to 1848. The “atmospheric river” event left 380,000 customers without power in and around the Bay Area.

“What we’re seeing now is that climate risks are perennial,” Gomathi commented. “We had extreme heat waves followed by storms and landslides in California; earlier this year in Texas, we had the stratospheric polar vortices. So, this is something that we are going to have to deal with. We are seeing the frequency and the intensity of these events increasing.”

Superstorm Sandy, which left nearly a million people without power in 2012, provides the basis for the first grid resiliency project Gomathi presented: superstorm scenario planning with a pseudo-global warming model.

“Sandy caught customers and providers flat-footed,” she said. This prompted an interest in scenario planning for future superstorms, so that providers wouldn’t be taken by surprise again. DNV worked with the Long Island Power Authority (LIPA) to model the path of a hurricane like Sandy along forecasted changes in air temperature, deep-sea temperature, and other climate factors. Models for the years 2050 and 2090 projected another Superstorm Sandy making landfall progressively closer to New York City. 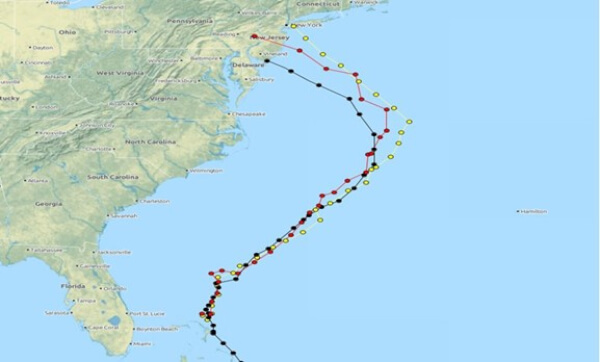 “This helps you go through the choreography of how you can prepare, how you can harden your grid assets,” Gomathi explained. 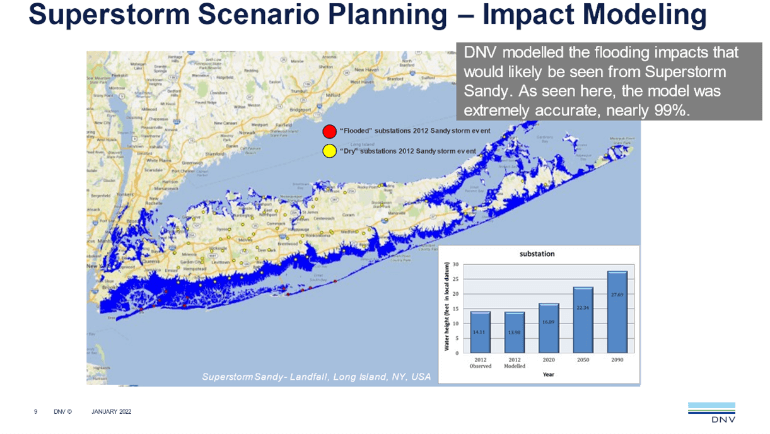 “Overlaying this with a graphic visualization of your actual buildings and assets tells you which of your customer-side assets and grid assets are going to be affected, how vulnerable they are going to be, and what the overall impact will be,” she said. “Then you can coordinate and prioritize accordingly.”

While the superstorm modelling project was about anticipating adverse events, Gomathi also discussed another resiliency project, in which DNV did post-event forensics for Gulf Power in the aftermath Hurricane Michael in Florida in 2018.

This project used asset and storm damage survey data to produce a statistical analysis of the damage that correlated potential contributing factors with event impacts across Gulf Power’s service territory. DNV divided the territory into one-square-mile grid cells containing a variety of factors, then developed logit regression models to determine the probability of grid failure. These results were then extrapolated to produce an overall expected failure rate for Gulf Power’s service area.

“When you consider these climate events, not only do you want to be looking ahead a few decades out and considering various atmospheric conditions and wind conditions,” she said, “You also want to be looking immediately after an event to see what went wrong, and how you can harden against the next event."

How to B-READY and ADAPT

Gomathi also discussed several tools that DNV uses to help its customers develop resiliency plans. Involving utility customers in the planning process is critical. “Customers, too, are a very important part of the grid,” said Gomathi.

DNV’s Synergi tool is used by several utilities for distribution risk assessment, producing a color-coded matrix that depicts the probability of an adverse event occurring and the impact of that adverse event. “What you see is a more granular view of your distribution system,” Gomathi explained. “And it allows you to see exactly where your distribution assets are going to be vulnerable - and prepare and strategize accordingly.”

“The way you build a more resilient grid is by having a comprehensive framework that first identifies what’s going to be exposed should these hazards or events occur, how vulnerable they are, and what the impact is going to be,” said Gomathi, introducing DNV’s ADAPT risk-based framework. “Then, use that information to inform decision-making and undertake hardening efforts.”

“You are involving your customers in your efforts,” she explained, “And you’re doing this in a continuous loop because, as we can see, the environment is changing around us in a rapid way. This is a continuous resiliency improvement process.”

It can be a challenge to get customers’ attention, however: a DNV study found that 45% of business respondents in North America thought that climate change would only have a limited impact on their organization and were not inclined to do any resiliency planning unless they had to. “This underscores the lack of impetus for mass-market adoption. We aren’t seeing the urgency for resilience efforts,” said Gomathi.

“Although,” she continued, “We know investors are looking at this. Current policy, market focus — the financial markets — and climate conditions are bringing this issue to the fore, even for businesses.”

Laws and regulations were found to be the key driver of the adoption of mitigation actions and resilience efforts. Top-down, authoritative measures—the kinds of initiatives that come with federal funding attached, and consequences for noncompliance—are necessary for companies to take on the kind of large-scale, ambitious projects required to harden our energy infrastructure.

The recent SEC proposed rule to enhance and standardize climate-related disclosures for investors is the latest example of top-down guidance that drives a market focus on this issue with policy tools.