It is important to answer two questions if your wind farm is underperforming against expectations: why is it and what can be done about it?

Let’s hypothesize for a moment that a new wind farm site is developed, a pre-construction long-term energy forecast is produced, and the project is constructed, commissioned and starts producing energy. However, after some time it becomes clear that the wind farm is not producing energy in line with pre-construction budget expectations. At this point an owner or operator has to answer two main questions:

Unfortunately, the answer to the second question is not always a clear ‘yes’. However, investigating the answer to the first question can provide valuable lessons learnt for future operations and for other projects in development.

To answer the first question an analysis of data from the operational wind farm is required; various options are available depending on the length of the operational period, the granularity of data available, and the amount of budget available for investigating this issue.

High-level options
The simplest option is known as a ‘balancing’ analysis and is most frequently used on projects which have been in operation for less than a year. Project production and availability, and sometimes losses due to issues, such as curtailment, are assessed on a monthly basis against the budgeted expectations for each, taking into account the amount of wind resource of each month against the long-term wind resource. 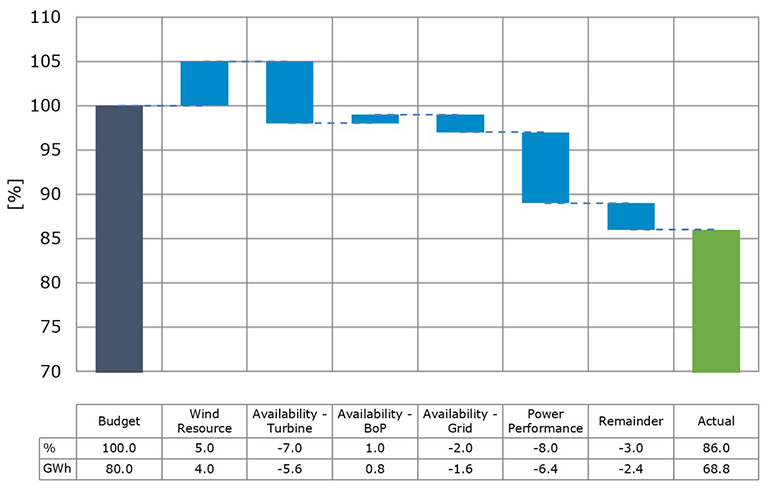 This analysis provides an overview of project performance to date. Poor energy production may be due to lower than average wind speeds during the period assessed, lower availability than that budgeted, a higher impact of curtailment than anticipated, or a combination of all these factors. This information could help target further investigation, or simply provide reassurance that the project is operating as anticipated, but the wind has not been blowing.

However, sometimes the balancing analysis cannot explain all of the energy shortfall. In this case, a deeper dive into the data is required to find out what is going on.

Detailed analysis options
The next and more complex type of analysis involves looking at 10-minute SCADA data, comprising signals such as individual turbine power, nacelle anemometer wind speeds, rotor rotational speed, and blade pitch angle. This can reveal a great deal about the behaviour of the turbines; issues impacting production can be identified which cannot not be determined from monthly data alone, or from an analysis which only focuses on wind farm availability. The list below gives a few examples of these issues: 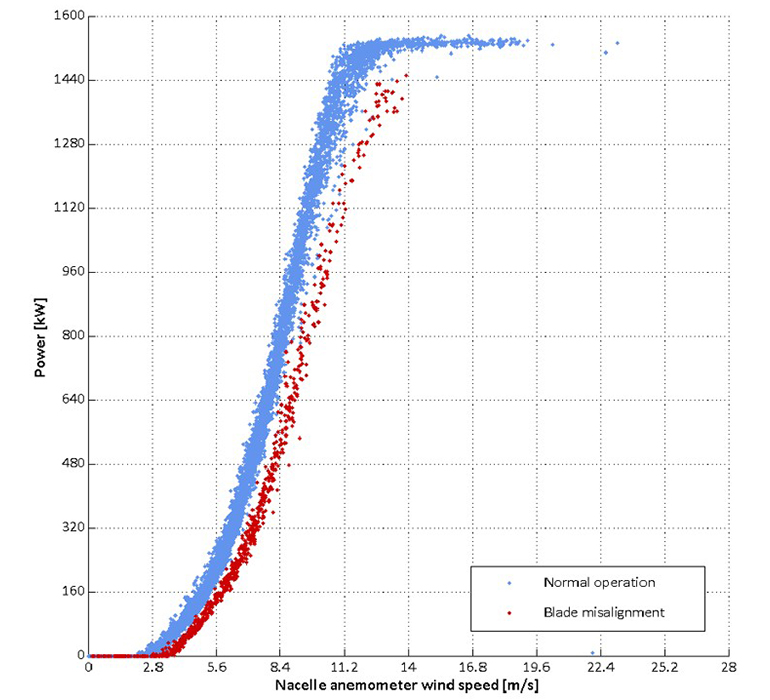 Luckily, in most cases these issues are ones that can be resolved or mitigated. Potentially, any lost production can be compensated for depending on the type of agreements that are in place between the owner, operator and turbine manufacturer. However, it is important to note that this type of work can only review power curve performance issues relative to what is ‘normal’ power performance for each turbine, due to limitations with nacelle anemometer wind speed readings. Assessment of power curve performance relative to the warranted power curve for the project is discussed further below.

If more than a year of operational data are available for the project, then a new long-term energy forecast can be produced from the 10-minute SCADA data. This updated forecast will be independent of any wind speed measurements and will provide a better representation of the actual production that can be achieved by the turbines in-situ than a wind-based modelling method. A comparison of the pre-construction energy forecast with the new post-construction forecast (known as a ‘reconciliation’) can be used to identify and quantify differences between the two forecasts. However, in general this analysis is unlikely to find issues that can be resolved in addition to those already identified through detailed SCADA analysis – it is more a tool to aid understanding. The causes of differences between a pre-construction and post-construction forecast which may include:

As with the balancing analysis, there may be cases where the energy shortfall cannot be fully explained by the reconciliation process. Options for further investigation and mitigation become more limited and potentially more expensive.

Further options
Analysis of high-frequency SCADA data (1-second to 1-minute average data) can be undertaken to identify issues, such as yaw misalignment or pitch imbalance. A resulting optimization program may achieve an uplift in production. However, high-resolution data may not be available for the project.

If the turbines are not operating in line with the warranted power curve for the site, then this can be a key contributor to any production shortfall. This issue can only be investigated with an IEC-compliant power curve performance test. However, not all projects will have been developed with suitable mast configurations to carry this out. If there is a SCADA mast on-site during the operational period, it may be possible to undertake a performance ‘mimic’, which attempts to apply the IEC test methodology as closely as possible. With no mast on site then it is not possible to investigate performance in this way without the considerable expense of installing measurement equipment, such as LiDARs. In addition to this, the terms of the turbine supply agreement may not leave any option for claiming compensation for turbine under-performance relative to the warranted power curve.

Where turbines are affected by operational restrictions it may be possible to further optimize any strategies to maximize output. Additional uplift in production may be possible to achieve through turbine upgrades. This might be through controller or software upgrades, or physical changes to the turbines, such as installation of vortex generators. This will be a topic of a future article!

In conclusion
There can be many different reasons for wind farm underperformance. Some can be easily identified and rectified, but sometimes owners and operators (and analysts) are left scratching their heads trying to pinpoint what is going on. With some forethought it should be possible to prepare against significant problems: