DNV, Gassco, and Statoil have developed a dynamic tool to optimize the emergency response to a gas release in order to give a correct view and understanding of the situation. This tool also contributes to reducing the uncertainty with respect to how the public rescue services react in alert and combat phases.

Over the years, DNV has conducted risk assessments of onshore pipelines in Norway on behalf of infrastructure operators Gassco and Statoil. CFD (Computational Fluid Dynamics) tools have been used for assessing the consequences of gas releases from these pipelines as part of QRAs (Quantitative Risk Analysis). History has shown that the consequences of accidental releases from onshore pipelines may be extensive both regarding fatalities and material damage. It is therefore crucial for operators to have a robust emergency preparedness plan to respond to such accidents in an efficient manner. 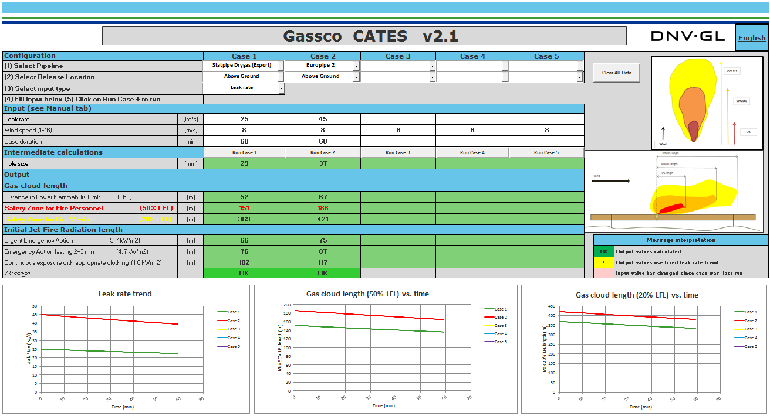 DNV has worked closely with Gassco and Statoil on the development of CATES (Consequence Assessment Tool for Emergency Situations) and the final version of the tool has recently been handed over for implementation into their safety management system.

In an accidental leak situation, the operators of CATES (Gassco and Statoil personnel), are able to use the tool to calculate safety distances for public rescue service personnel and their vehicles, expressed as number of metres to 50% and 20% LFL respectively, based on simple input (leak size and wind speed).

The tool also gives the estimated leak trend and duration. The initial leak rate can first be estimated based on information from the accident location. Information about the leak rate can often be estimated in the control room if the leak is large and the pressure drop is measured over time. If a known valve is broken, the size can be used to specify the leak size. It is therefore important that operators get as much information as possible from the accident in order to specify the leak size.

The safety distances are then plotted as circles on a map through an interface in Gassco/Statoil GIS tool. A PDF of the map, safety distances, and scenario information is produced and communicated by second line personnel to the fire brigades and the police on scene and to the local authorities.

Any action on scene must be decided and commanded by the police. Gassco and Statoil can only provide technical advice based on process status and technical data. CATES gives public emergency response personnel (and fire brigades in particular) information on how close to the release point they can operate safely without being exposed to gas and/or fire. The tool also provides knowledge about release duration and extent which is also important for the rescue services when deciding on demobilization etc.

As the situation develops, results can be updated continuously. This information shows how close to the leak site fire fighters with proper PPE (Personal Protective Equipment) and gas meters may go without exposing themselves to unnecessary risk. As opposed to the default worst-case radius around the leak site being used today by the police, CATES provides distances that are specific for the given pipeline, leak scenario, and location and proving to be much shorter in most instances. This increases the efficiency of rescuing injured persons close to the site and reduces the extent of evacuation.

Successive versions of CATES are successfully tested during full scale emergency drills and table top exercises. Both companies, Gassco and Statoil, as well as the local public rescue services are satisfied with the result, and believe that the tool would represent an important support in a possible emergency situation contributing to optimization of emergency preparedness (time and quality) in an accidental situation.

If you have any questions, please do not hesitate to post a comment to this blog, or send mail to our CATES contact person, Olivier Baldan olivier.baldan@dnvgl.com.

Also please join us at the “Pipeline Technology Conference 2016” in Berlin on 23 May 2016 to get an in-depth presentation of CATES!